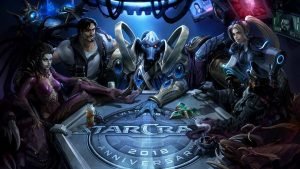 Allegedly, Blizzard has cancelled a StarCraft first-person shooter to put more resources into Diablo 4 and Overwatch 2.

Kotaku reports that the project, codenamed “Ares”, was an experimental game “like Battlefield in the StarCraft universe” made in the Overwatch engine. The team, speaking anonymously, said they had built prototypes in which the player fought Zerg aliens as Terran marines. There were plans to experiment with playable Zerg as well. Apparently, progress may have been a little slow, but there were no major issues with the development.

Resolving The Reoccurring Discourse o…
Mobile Fun: 5 Mobile Games You Can Pl…
Amazon Prime: Amazon Prime Membership…
Two strikes against me and the day is…
Best Gaming PC Build for 1440p: Under…

The project was ultimately scrapped, with all of the team members being sent to work on Diablo 4 and Overwatch 2. Diablo 4 has been rumoured for some time, and Overwatch 2 will apparently have a bigger Left 4 Dead-esque PvE focus. These titles are expected to headline this year’s BlizzCon. When Kotaku reached out to Blizzard for comments on the cancelled project, they responded in a non-specific way that lent credence to the report, stating “The work that goes into these projects – whether they ship or not – is extraordinarily valuable. It often leads to great things and helps foster a culture of experimentation here”. You can read the full statement to Kotaku in their coverage of this story.

Like the third-person shooter StarCraft: Ghost before it, this marks another StarCraft project that will never see the light of day. Company resources are finite and there are bigger priorities, but it would be nice to see something new from the franchise at some point.

The post Blizzard Rumoured To Have Cancelled Starcraft Fps To Focus On Other Titles appeared first on CGMagazine.