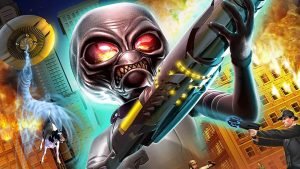 As a nice prelude or appetizer to E3 2019, THQ just dropped a teaser trailer for a Destroy All Humans! remake. The game is slated for release sometime in 2020 for PlayStation 4, Xbox One and PC.

The original game followed the exploits of Cryptosporidium 137 or Crypto, an alien clone, tasked in harvesting Human brain stem cells, which contain traces of the Furon Alien DNA — paramount in restoring the degrading nature of the Furon clone race. The biggest draw of the series is arguably its open sandbox world, fun and unique weapons and the various quips and one-liners from Crypto.

In true, videogame teaser-trailer fashion, the Destroy All Humans! remake trailer opts for a cinematic approach, rather than actually showing off gameplay, however, what we do get seems to be rather promising, mostly due to the inclusion of Rammstein.

Destroy All Humans! is currently in development by Black Forest Games with THQ Nordic behind the project. The game is expected to release sometime in 2020.

The post Enlist in the Alien Invasion in 2020 with Destroy All Humans Remake appeared first on CGMagazine.

This post first appeared on CGMagazine, please read the originial post: here
People also like
How to prepare mango leaves for diabetes
Frasier’s Honey Snow: Does truth hurt relationships?
Seven Reasons Why Fast Hosting Servers Are the Way to Go
Online Massage Therapy Courses, are you ready to start today?
Karen Wiesner: I Have Dreamed a Little Dream (Authors and Dream Inspiration), Part 2