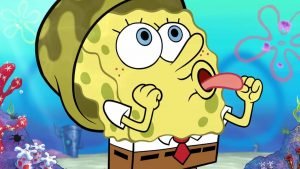 THQ Nordic has revealed that it will be remastering (or “rehydrating”) SpongeBob SquarePants: Battle For Bikini Bottom.

Released in 2003 for the PS2, Xbox, and GameCube, the platformer-adventure classic is receiving an overhaul on PS4, PC, Xbox One, and Nintendo Switch. It garnered mild praise from critics, but fans loved it for emulating the spirit of the TV show. Players will once more be able to take SpongeBob, Patrick, and Sandy on an adventure through a robot-infested Bikini Bottom, collecting gold spatulas and karate-chopping machines to save the day. This re-release will feature not only remade visuals, but refined gameplay, a multiplayer horde mode, and content cut from the original game.

This is the first of a trilogy of reveals THQ Nordic has planned for this week. The second title will be revealed tomorrow, June 6th at 11:00 PT / 14:00 ET, with the third and final game announced Friday, June 7th, also at 11:00 PT / 14:00 ET. On the TV front, Nickelodeon is moving forward with a SpongeBob SquarePants prequel series tentatively titled Kamp Koral.

SpongeBob SquarePants: Battle for Bikini Bottom Rehydrated is currently in development for PS4, PC, Xbox One and Nintendo Switch.