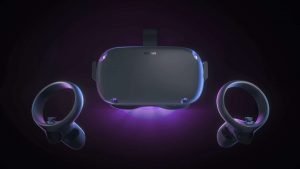 Ever since Facebook purchased Oculus in March 2014, it was clear that the company’s goal would be to make virtual reality a common household technology, much like video game consoles and smartphones. They made steps to approach this goal by focusing on simplicity; their first generation devices catered to the PC and mobile markets with the original Oculus Rift and Oculus Go (and their early Gear VR partnership with Samsung) catering to each respectively. This year with the release of the Rift S and Quest—simplicity remains a core tenet in reaching that goal. So that brings our attention to the latter of the two new devices, the Oculus Quest, their new all-in-one device that promises wireless room-scale VR and high-quality games with minimal hassle.

Unlike the Oculus Go, the company’s first stand-alone headset, the Quest offers six degrees of freedom (6DOF), meaning full head and hand tracking so that players can naturally move within and interact with 3D environments. Previously this technology was limited to PC VR games, with the Oculus Rift and competitor device the HTC Vive offering room-scale through the use of external trackers that were to be placed in a pre-determined play area. The Quest utilizes inside-out positional tracking so that the only hardware involved to jump into a game or app is the Quest itself and the two included Touch controllers.

My personal experience with VR prior to the Oculus Quest was with PC games using the HTC Vive Pro, which can be argued is at the top of the VR tech food chain in terms of specs (at least until the Valve Index releases later this summer). I had never used an Oculus device or their platform, so my approach to the Quest would be that of a VR enthusiast used to higher-fidelity games and as a consumer unfamiliar with Oculus’ user experience. 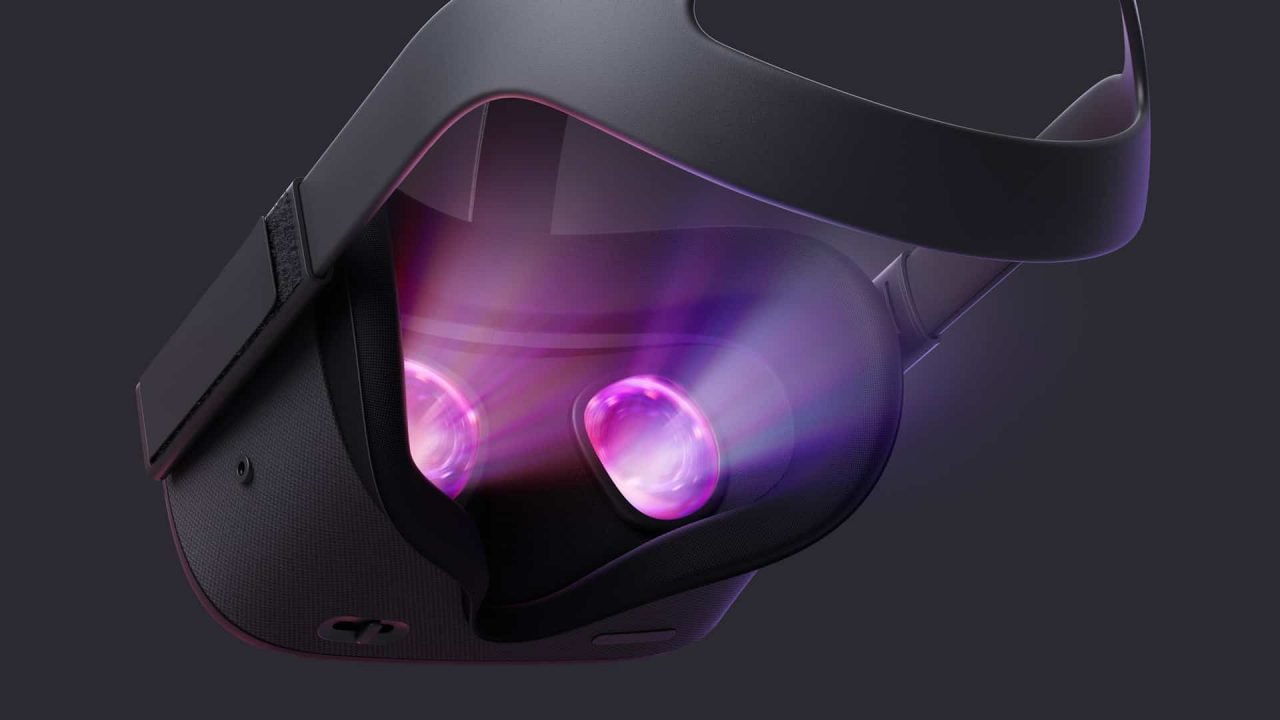 The Oculus Quest features an OLED display with a resolution of 1440 x 1600 per eye (same as the Vive Pro) with a 72Hz refresh rate, 4GB of RAM, and a Qualcomm Snapdragon 835 processor (which can be found powering smartphones such as the Samsung Galaxy S8 and Pixel 2). There are two models available starting at $549 CAD for 64GB of internal storage and $699 CAD for 128GB. Inside the nicely-designed package is the headset itself, two Touch controllers (two AA batteries included), a glasses frame spacer, and the charger.

While setting up a room-scale play area using Valve’s lighthouse trackers through SteamVR isn’t cumbersome assuming you have the recommended minimum of 6’6” x 5’, doing so on the Quest is shockingly simple and quick. First, the Oculus app must be loaded on a smartphone to sync the devices. Via passthrough, which allowed me to see my surroundings through the two lower cameras on the Quest, I was prompted to confirm my floor height and define my play area from afar. A few clicks and 30 seconds later, the Guardian walls were set around the play area and I was all done.

The Guardian appears as a blue grid that turns red when the user gets too close, preventing accidental hand or body breaches outside of the play area. Visual feedback from the Guardian is exceptional, and setting a standing-play is as simple as placing a small cylinder-shaped Guardian in the middle of a room. The Quest also saves previously set Guardians so setup doesn’t need to be repeated if you’re playing in different locations. Though, it doesn’t work all of the time as lighting (indoor lights and time of day) may affect its detection abilities. 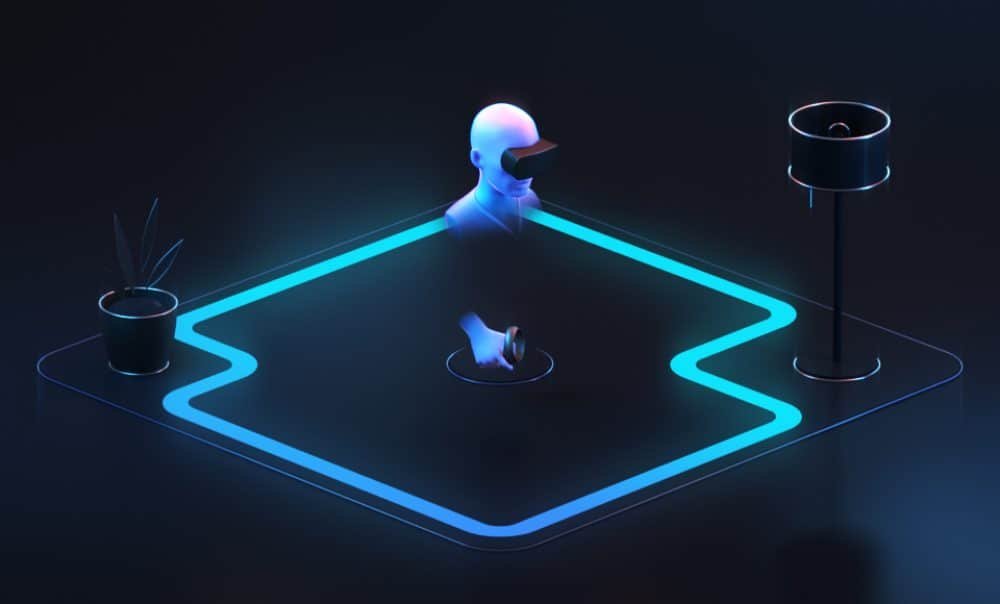 The Oculus Quest launched with an impressive lineup of games, including original titles such as Vader Immortal: Episode 1 and Journey of the Gods and ports of PC titles such as SUPERHOT VR, Robo Recall, Beat Saber, Job Simulator, and Apex Construct. While the PC ports have varying degrees of noticeable downgrades to visuals, the comparable gameplay leaves little to desire. SUPERHOT VR, thanks to its simplistic art style, translates wonderfully to the Quest and felt hardly any different than when played on my Vive Pro. Beat Saber as well, though its demands for wide arm movements caused the Guardian to appear frequently which distracted from gameplay. Original title Vader Immortal: Episode 1 is a great example of what the Quest is capable of—featuring impressive graphics, intuitive controls, and exciting combat. Not once did I feel like the Quest’s hardware was too weak to handle the types of VR games I was accustomed to on PC. The 72Hz display (versus 90Hz on the Vive) wasn’t a major problem for me either; games felt responsive and visuals have a tolerable level of smearing.

The ability to simply grab the Quest and travel to another realm sometimes feels like magic. It prompts reflection on how far we’ve come with gaming technology, and I could see myself defaulting to the Quest for some cardio sessions in Beat Saber or Creed over my Vive Pro if it wasn’t for just one thing: comfort. 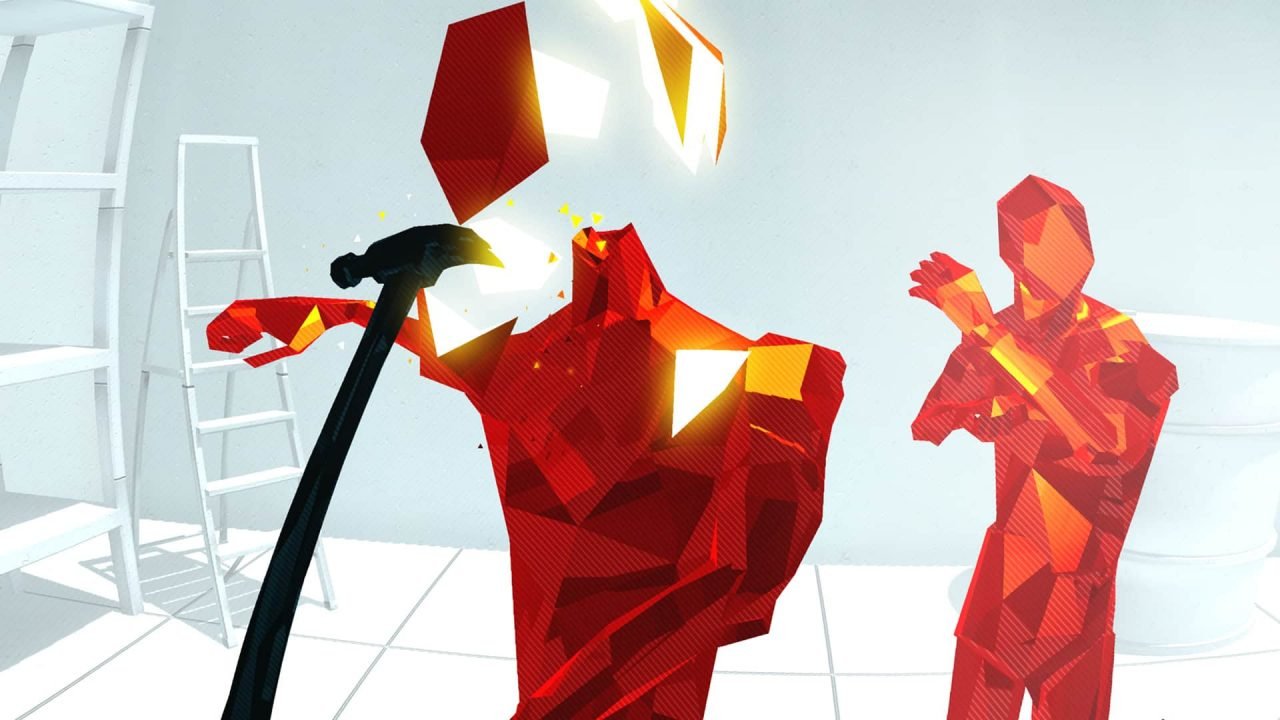 Unfortunately, the Quest can be quite uncomfortable if your head, like mine, doesn’t accommodate the strap design just right. Even though I really like Oculus’ backstrap that uses Velcro on each side and at the top to tighten the Quest, no matter how many times I adjusted the straps the headset put too much pressure on my brow and made using the device painful within 30 minutes to an hour. I ensured that the backstrap cradled my skull and that the side straps ran parallel to my ears. I tried loosening and tightening just the sides or just the top and everything in between. Perhaps the glasses frame spacer is the culprit as it adds a centimetre or so of additional spacing between the face and the Oculus lenses. My eyesight is too poor without glasses, so I’ll have to wait until my prescribed lenses from VROptician arrive before I can try the Quest without the spacer.

The only fix that I found to reduce discomfort came from members of the Oculus Quest subreddit and involved adding a counterweight to the backstrap to help reduce the front-load. Some people made their DIY counterweights out of batteries or actual exercising weights; I used my Vive Wireless Adapter’s battery pack and a loop made from a twist-tie. It worked, but given how many people I saw felt that they needed to make a counterweight of some kind to comfortably play their $500+ gaming device is concerning. It’s a shame the Quest doesn’t have a sturdy, padded strap like the equally priced Rift S does.

And while I’m on the topic of weight, the Touch controllers—though much more enjoyable to use than the Vive wands—can be a tad cumbersome to grab due to the top-heavy ring placement. They easily turn over in the hand first picked up. Some users have also complained about the sliding battery compartment, though I haven’t had any issues yet. 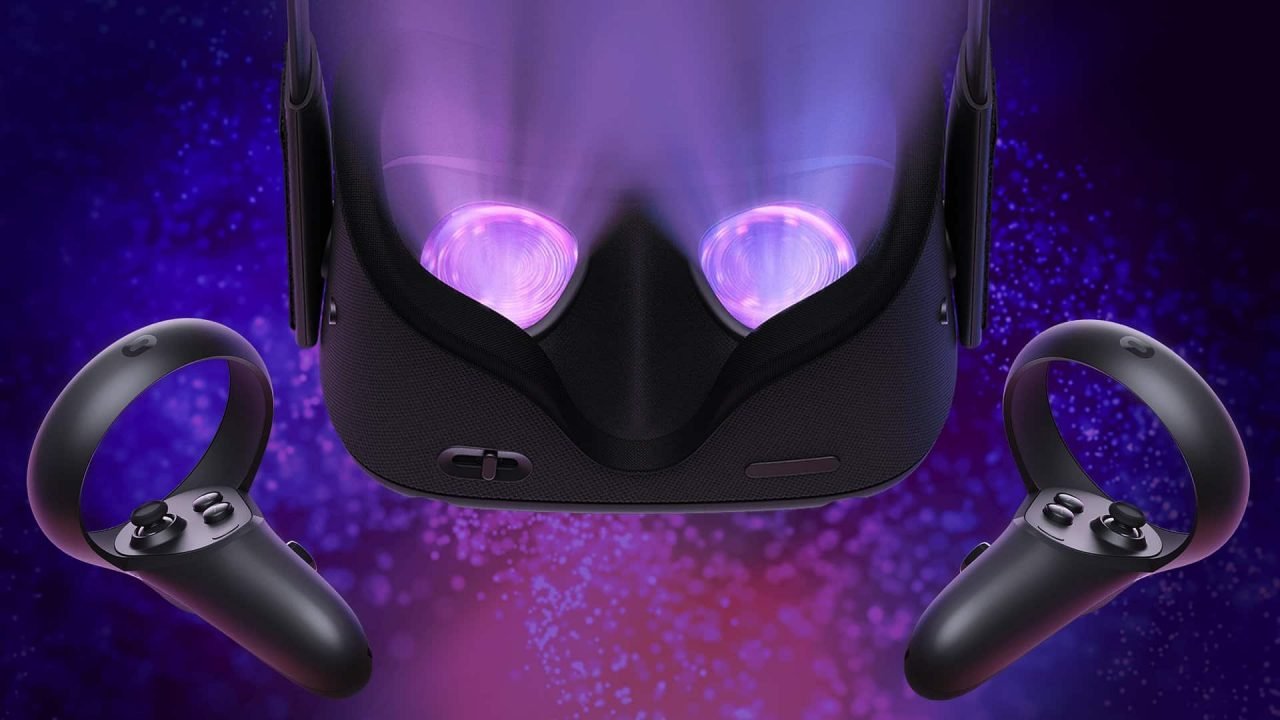 There are a few other issues as well that may be more forgiving depending on an individual’s patience and tolerance. As of writing, Oculus is investigating a crackling audio issue that affects the right speaker of the Quest. Allegedly it’s software-based and can be temporarily fixed by restarting the system, which I can confirm works. This problem only increases my existing dislike of the off-ear design of these speakers, which do not provide enough accuracy or bass to sound, making music-based games less groovy and a disadvantage in multiplayer shooters which rely on sound to hear incoming enemies.

The Quest OS generally works well, but I’ve experienced several system crashes in multiple titles, most but not all while streaming to Facebook. Other problems include no hotkey to enter passthrough mode or take screenshots, two features I made a lot of use of on the Vive Pro that should be doable here. At random points after launching a game, the Oculus Dashboard button becomes less responsive, so the aforementioned functions are even harder to access. The Guardian can also be distracting and sometimes cause discomfort due to its flashing if the controllers get too close to its walls as is prone to happen in games like Beat Saber, and there’s no option to reduce its luminosity.

The use of a smartphone to set up the Quest is also odd as the requirement would lead one to expect relevant features such as phone notifications being viewable in VR. Streaming to Facebook is also buggy and live comments never worked for me. The absence of popular gaming apps such as Discord and Twitch on the Oculus app store is strange as well. These little oddities and omissions make the Quest’s launch software feels ever so slightly incomplete. 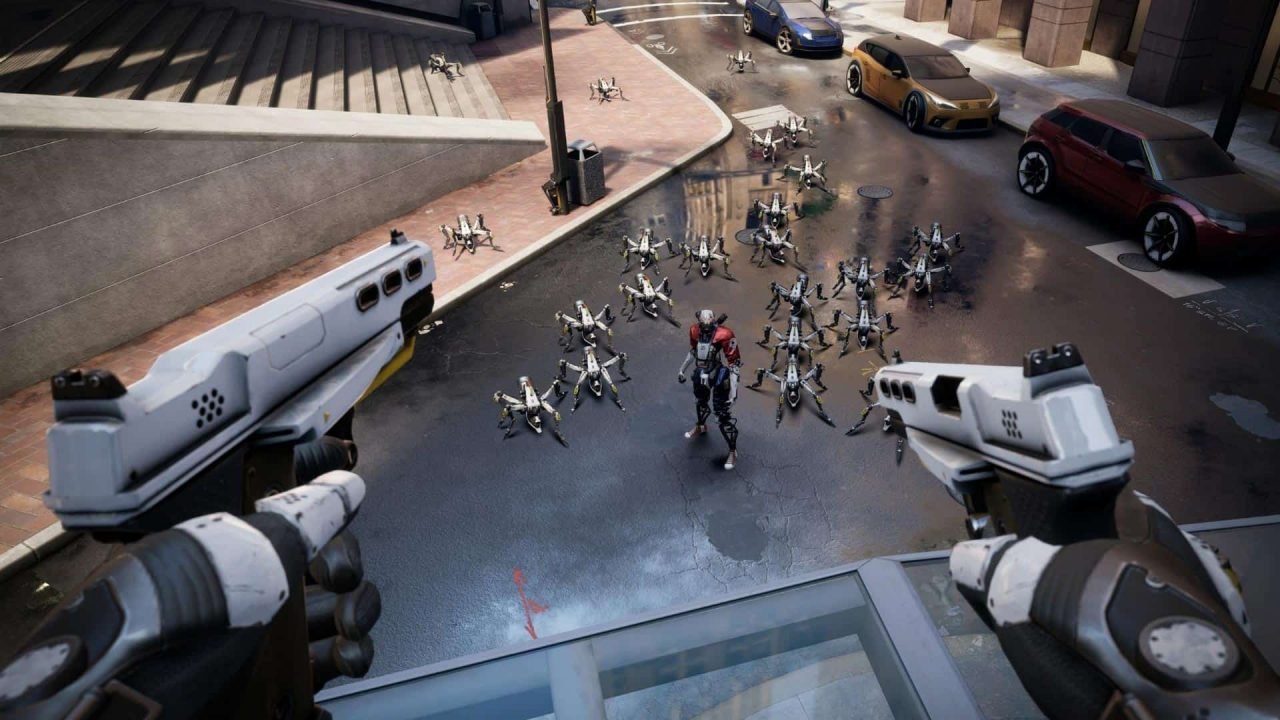 The Oculus Quest sits in a very curious place. It’s possibly the best device to lead VR forward into the mainstream due to its ease of use, but it’s marred by a few quirks that demand users be invested in VR enough to overlook its faults. The average consumer may not want to deal with additional accessories to improve comfort or increase the Quest’s roughly 2-hour battery life. Though I’m accustomed to the occasional glitch with SteamVR and am willing to purchase an accessory or two to improve my experience, the average person may not be willing to do so.

The Oculus Quest presents itself in a different light than the HTC Vive or its older sibling, the Oculus Rift S. It’s targeted at the entry-level VR fan. So while I’m used to the hidden costs of VR headsets that come from an enthusiast level of interest and overlooking software stability issues, I wanted to free myself of these things with the help of the Oculus Quest. At this time I can’t say that I have, but the future still looks bright.

Even though the Quest suffers from a few early-days related issues, it’s still in an incredibly advantageous position to sway public opinion on how accessible VR can be. Heck, my mom has no idea how to play video games but within five minutes of using the Quest, she was interacting with objects without my help. Moments like that have me convinced that with the right post-release support, the Quest could become the most influential VR device to date.