Iron Maiden Tightens Their Spikes on 3D Realms, in $2 Million in Damages for Likeness 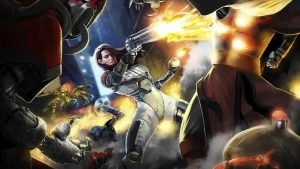 Legendary metal band Iron Maiden — specifically, their holding company — is currently in the process of suing 3D Realms, the game studio behind titles such as Duke Nukem, Wolfenstein and of course, the yet to be released, Ion Maiden.

The lawsuit filed against 3D Realms from May 28, in reference to the game’s logo being a blatant copy of Iron Maiden’s branding, states that it is “an effort to confuse consumers into believing Defendant’s products and services are somehow affiliated with or approved by Iron Maiden,” arguing that:

“Defendant’s misappropriation and use of a virtually identical imitation of the Iron Maiden trademark creates a likelihood of confusion among consumers. Customers who view Defendant’s video game and merchandise are likely to believe that Iron Maiden is somehow affiliated with Defendant.”

Iron Maiden’s holding company wishes to claim $2 million in damages in addition to the removal of the Ion Maiden website.

The lawsuit backed up their claims with quotes accrued from confused Iron Maiden fans (which is as funny as it sounds) — some excerpts from Kotaku’s initial report can be read down below:

Ion Maiden is a retro-inspired FPS, with graphics reminiscent of 3D Realm’s legacy titles, such as the aforementioned Duke Nukem series. The game is slated for release sometime in 2019 — however, this new lawsuit will likely impede it until further notice.

The post Iron Maiden Tightens Their Spikes on 3D Realms, in $2 Million in Damages for Likeness appeared first on CGMagazine.

Iron Maiden Tightens Their Spikes on 3D Realms, in $2 Million in Damages for Likeness