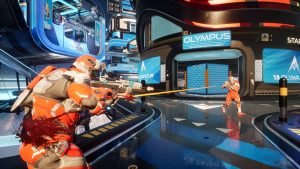 As of last Friday, the team-based FPS became available to play for free, with a $20 Founder’s Edition also available that provides extra cosmetics. Splitgate intends to invoke the feeling of a classic old-school shooter, featuring high-mobility action and close-quarters combat with a high skill ceiling for movement tech. Completing the package is the game’s portal creation mechanic, allowing players to move and shoot across the map in an instant.

There are a variety of gametypes, as well as bot support so you can hone your skills for the real thing. You’d better make sure you at least know what you’re looking at, because on Tuesday, May 28th at 10am PT/1pm ET, Twitch will be hosting the ‘Twitch Rivals: Splitgate: Arena Warfare Tournament’, featuring 16 teams of four streamers each competing live for the chance to win $50,000.

Once again, Splitgate: Arena Warfare is out on Steam and free of charge. Sounds like it’s in the usual launch bugfixing phase, but you’ve got nothing to lose by checking it out!