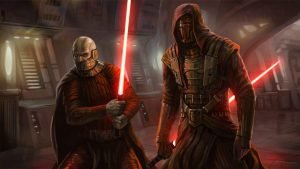 Bioware’s 2003 classic game Star Wars: Knights of the Old Republic may be getting a film adaptation.

Buzzfeed reports that Laeta Kalogridis, the writer behind ‘Shutter Island’ and the American film adaptation of ‘Alita: Battle Angel’, is writing for the project. Their sources claim that this could be the first film in a trilogy. At the Star Wars Celebration back in April, Lucasfilm president Kathleen Kennedy told MTV News that there was something in the works for KOTOR, but they didn’t know how it would end up. If this trilogy happens, it could pad out the off years of the next mainline ‘Star Wars’ film trilogy well.

Homemade No Churn Raspberry Ice Cream
Mr Vegas Casino Review – Get up to a …
Meow Bar, Moscow
A Furry’s Guide to Cryptocurrency
Mexico City: a virtual tour through f…

Bioware has released many critically acclaimed games, and KOTOR 1 and 2 certainly aren’t the least of them. With a diverse and memorable cast and a bunch of planets to explore, KOTOR showed gamers a good time back in the day, and it continues to for those who are willing to brave the realm of older PC titles. I’ve played enough of KOTOR 1 to know how a trilogy would pan out, and I’m interested to see it happen.

No further news is available, but eyes are definitely on Knights of the Old Republic’s name for the foreseeable future.

The post A Star Wars: Knights of the Old Republic Film May Be In Pre-Production appeared first on CGMagazine.