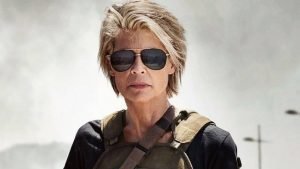 The first, extended teaser for the latest Terminator film, Terminator: Dark Fate has released. The movie takes place two decades after the events of Terminator 2: Judgement Day, with Linda Hamilton reprising her iconic role as Sarah Connor and Arnold Schwarzenegger, as the misunderstood, killing machine.

Terminator: Dark Fate, also sees the return of James Cameron, who is producing the film, alongside David Ellison (Mission Impossible, Annihilation). Tim Miller of Deadpool fame is directing the upcoming sequel, which should at least guarantee for some cool cinematic set pieces.

The trailer for the forthcoming film, shows off the cast, including both Sarah Conner and Schwarzenegger’s Terminator, this time, depicted closer to the real-life actor, than previous installments. Dark Fate takes place right after the events of 1991’s Judgement Day, retconning the events of the numerous sequels that have come out since. Dark Fate will be the first pillar in a set of a new trilogy, dependent on the success of this first film.

Like Terminator 2: Judgement Day, Dark Fate, at least in the trailer, seems to feature a liquid-metal Terminator, similar to Robert Patrick’s iconic killer cop. The last Terminator film to see release was in 2015, with Terminator Geneisys, which starred both Arnold Schwarzenegger and Emilia Clarke of Game of Thrones fame, as a younger Sarah Connor.