The New Ghostbusters Film Will Favour Practical Effects Over CG 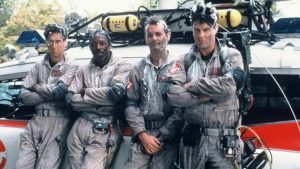 In a recent interview with 660 News, Dan Aykroyd has confirmed that the upcoming ‘Ghostbusters’ Film will tend more towards Practical Effects than CGI.

Falling rockets pose increasing dange…
How To Help Your Husband Get On Board…
Promethazine injection B.P (PROVITA)
5 Celebrities Who Use CBD To Stay Cal…
Zama Marubelela buys new ride ahead o…

He went on to estimate that the film’s budget would clock in between 50 and 100 million dollars, and state that the story would involve a family moving to a small town. This meshes with the casting decisions thus far, with Carrie Coon (‘Fargo’, ‘Avengers: Infinity War’, ‘Gone Girl’) as a single mother, Finn Wolfhard (‘Stranger Things’, ‘IT’) as her son, and Mckenna Grace (‘Annabelle Comes Home’, ‘Captain Marvel’) as her daughter. This film appears to have no connection, story-wise, to the previous ‘Ghostbusters’ film released in 2016. Although it received mixed reviews, CGMagazine’s Phil Brown saw the film as “funny and exciting and amusing and it works.”

Jason Reitman, son of ‘Ghostbusters’ 1 and 2’s Ivan Reitman, will be directing and will be co-writing the script with Gil Kenan (‘Monster House’, ‘Poltergeist’). Bill Murray has mentioned that he’s willing to return for a role, but only if the director asks.

The new ‘Ghostbusters’ is scheduled to come out on July 10th, 2020. We’ll keep you posted on any further paranormal activity.

The post The New Ghostbusters Film Will Favour Practical Effects Over CG appeared first on CGMagazine.

This post first appeared on CGMagazine, please read the originial post: here
People also like
Falling rockets pose increasing danger to human life, study reveals
How To Help Your Husband Get On Board With Prepping – Part 2
Promethazine injection B.P (PROVITA)
5 Celebrities Who Use CBD To Stay Calm And Relaxed
Zama Marubelela buys new ride ahead of her 25th birthday – Photos

The New Ghostbusters Film Will Favour Practical Effects Over CG