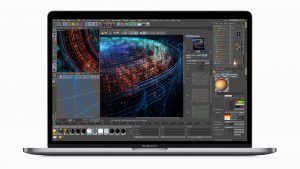 Earlier today, Apple introduced an updated line for their Macbook Pro series of laptops, featuring the fastest processors to date. The latest refresh of the MacBook Pro will for the first time, sport an 8-core processor, based on both the 8th and 9th generation of Intel-based CPUs.

Tom Boger, Apple’s senior director of Mac Products and Marketing, said the following on the matter,

“Whether it’s college students mastering a course of study, developers building world-class apps or video editors creating feature films, we’re constantly amazed at what our customers do with their MacBook Pro.”

Concluding with, “Now with 8-core processors for an incredible performance boost, along with its stunning Retina display, fast storage, all-day battery life and running macOS, MacBook Pro continues to be the world’s best pro notebook and we can’t wait to get it into our customer’s hands to see what they do next.”

The 15” MacBook Pro will now support clock speeds up to 5.0GHz per core, while the 13” variant with Touch Bar support, will feature a faster than ever, quad-core processor with Turbo Boost speeds up to 4.7 GHz, per core. According to Apple, comparatively to the last iteration of their 15” MacBook Pro, the new 8-core equipped MacBook will be two faster.

Both the 13” and 15” MacBook Pro model will ship with macOS Mojave, Apple’s latest and greatest operating system. Additionally, both variants of the MacBook Pro will feature Apple’s Retina display technology, stereo sound, touch ID, and Thunderbolt 3 IO, allowing easy expansion for things such as external displays and graphics cards.

The refreshed MacBook Pro is now available, starting at $2,399 CAD and $3,199 CAD respectively and can be bought directly through Apple’s official website.