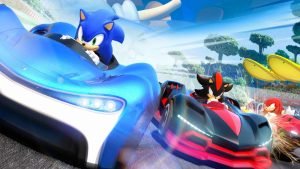 Sumo Digital, the developers behind the fantastic Sonic & Sega All-Star racing games, is back with a new hedgehog-centric racer, this time focusing purely on Sega’s Blue Blur and friends. You won’t find other familiar characters here from other Sega games, nor will you find boats or planes like in Transformed, but what you will find is easily the best and most creative kart racer in years.

As the name implies, Team Sonic Racing is all about racing together as teams of three racers (take that Double Dash with your two racers!) You and your teammates leave a yellow trailer behind as you race that your teammates can follow behind in to get a boost. Items can also be offered up to your teammates, should they fall behind. Passing items back and forth not only builds up a team based super move meter that makes you mostly invisible and gives your whole team a boost for a short period of time but also can grant you items you can’t get just by running over an item capsule. Lastly, driving close to your teammates just as/after they crash will give them an instant boost getting them back into the race, meaning even your most casual friends can have a good time and stay in the race and keeps races feeling close. 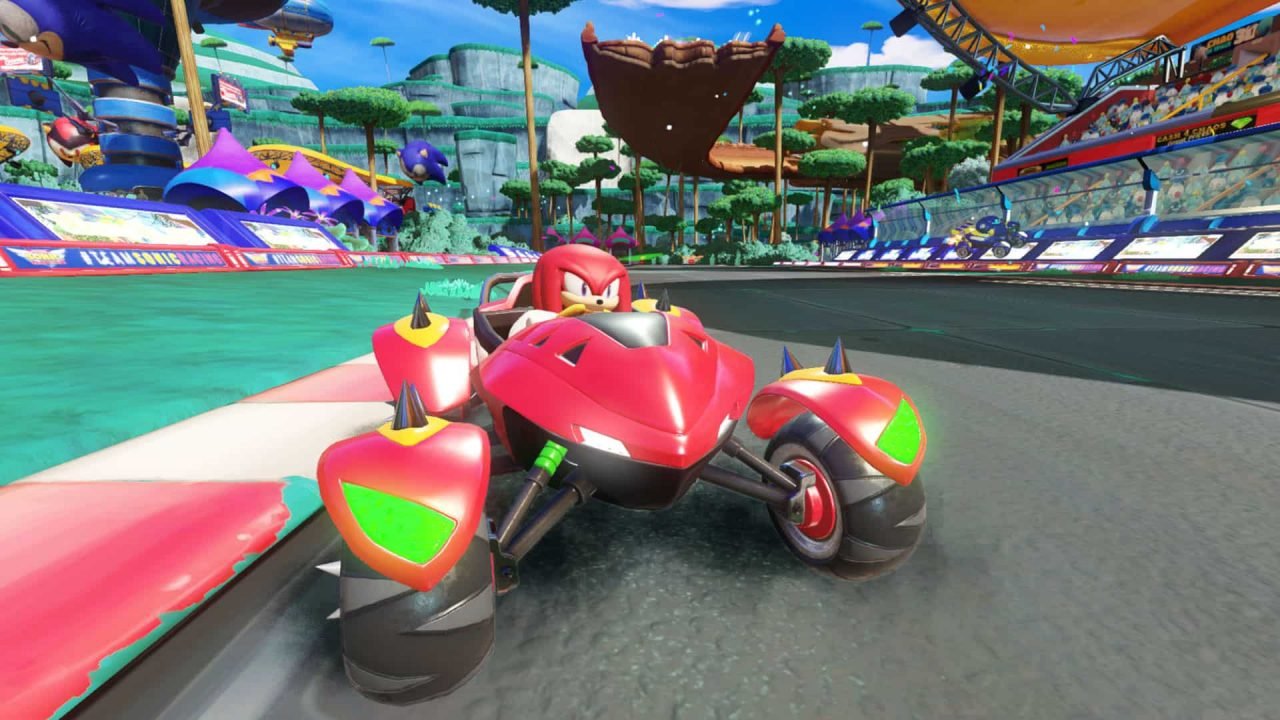 I know I’m in the minority when I say that I wasn’t a huge fan of Sonic & Sega All-Stars Transformed whole transforming gimmick, mostly because some of the boating sections were too floaty (pun intended) and the track wasn’t all that defined in these sections which could make it confusing until familiar with the track. Here you’re all car, all the time and it works. You’ll still be flying through the air over tons of jumps, and travelling at heckin’ fast speeds thanks to boost pads laid generously all over every track. In comparison to the previous All-Stars games, Team Sonic Racing certainly feels faster paced, with tighter controls and more refined tracks with tons and tons of alternate paths and shortcuts to find.

One other big change (literally) is that tracks are much wider. This appears to have been done to make it a bit easier to stay together with your team taking advantage of their boost lines and other team-based moves. It also means drifting is a lot easier to do without fear of hitting walls, though the amount of time it takes to boost to a maximum speed has been increased to make up for it, it feels fine. Team Sonic Racing practically encourages drifting the entire time, and since you can easily switch the direction of your drift without losing the boost that has built up, it just works.

The whole game runs at a smooth 60FPS, with maybe one small hiccup in the entirety of my playthrough on my PS4 Pro with boost mode enabled. The graphics are bright and colourful, as you’d expect for any game consisting of talking animals that wear clothes and race cars. That said, sometimes the graphics could be a bit washed out in brighter areas and I don’t believe the game runs at 4K, but I doubt anyone really expects it to. The soundtrack features every Sonic fan’s favourite band Crush 40 with a new song, and then new remixes of tracks that should strike the nostalgia chords in both older and younger players alike. 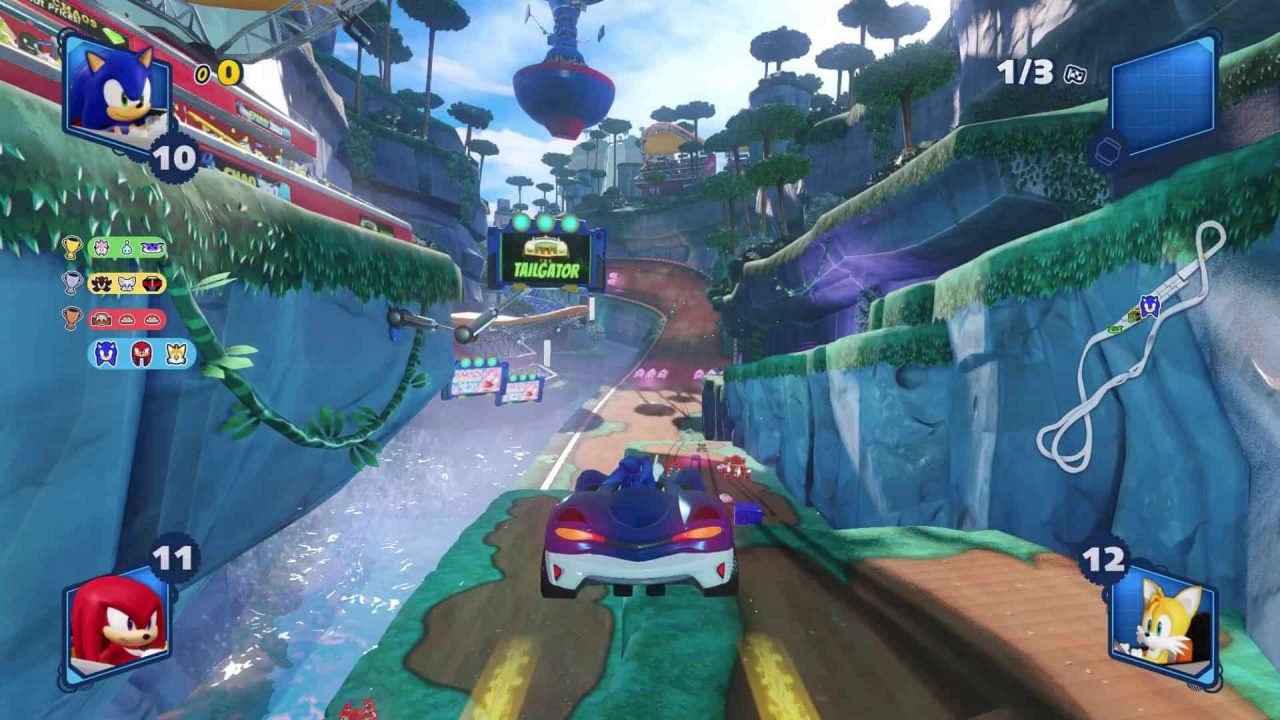 Speaking of characters, you’ll get a whole heaping dose of them in the Team Adventure mode, aka this game’s story mode. The story is told through still pictures of each character while their lines are fully voice acted by all the voice actors you’re familiar with. The story is…well…a modern Sonic story, that is to say, it’s pretty cringe. Thankfully, you can play through the varied story mode without viewing any of these scenes if you so choose, as there’s an option to just start each of the events, or a different button will play the pre/post race dialogue.

There are a plethora of different race types that you’ll experience in the Team Adventure mode outside of normal races and grands prix, such as solo challenges that challenges players to constantly drift while grabbing lines of rings on each track, or racing through checkpoints to boost time and/or scores, survival races where each lap the last three racers are eliminated, and even races against Dr. Eggman robots where you’re encouraged to kill them to death (which is the best amount to kill something). I, for once, appreciate the amount of variety found here, even if you’re forced to race on each of the 21 tracks numerous times. That said, a lot of these events are optional if you just want to get to the end and see the credits, though if you complete them while meeting specific requirements you earn keys that unlock different pieces of vinyl to customize the look of each characters’ cars.

Not only can you add vinyl to cars, but you can change their colours with unlockable colour palettes, and earn parts that change the stats of each of the character’s cars. Don’t like the way Big the Cat handles? Slap some different wheels on. You get the drift (another pun that I intended). I may be in the minority here, but I hate how the Mario Kart series went from this casual fun party game to a game requiring a spreadsheet of each of the different character’s stats and vehicle parts to even remotely be viable when playing with someone familiar with the game. Here each character only has three different types of parts that can be changed, with four variations of each part (seven if you count the golden coloured versions that have identical stats) meaning it doesn’t take a whole lot of thought to get into the game and your casual friends can still be competitive against your True Hardcore Gamer (TM) self. 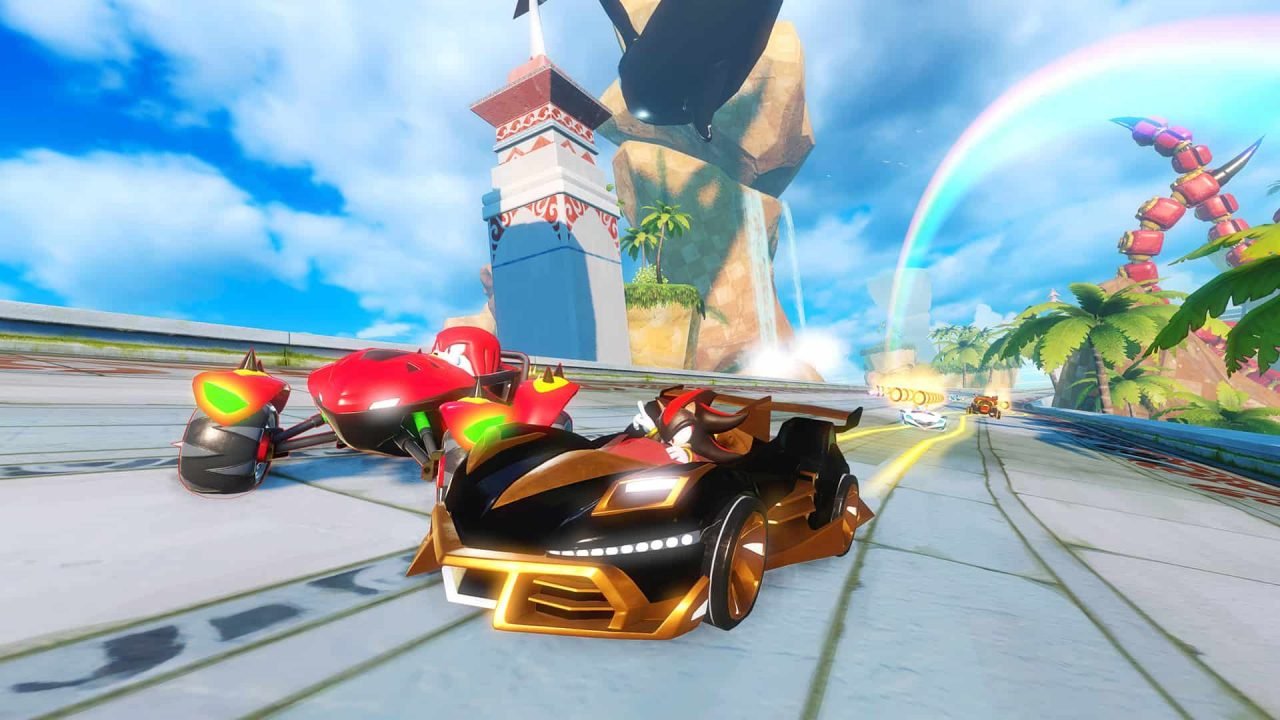 While I didn’t get a chance to test out the online multiplayer modes, Team Sonic Racing offers quick play, team play, and solo play. Yes, you can even remove the team elements and have every critter, robot, and Eggman for themselves, but it doesn’t feel quite as good as the game is designed around racing as a team. Thankfully your AI partners are usually pretty decent and never cost me a win in my playthrough. Plus, there’s local four player split screen co-op.

If I had to nitpick, I’d say other than the cringe story, the only other things I personally disliked (which you may very well enjoy) was the characters spouting repetitive cringe lines during races. It would be one thing if characters were saying like iconic lines or something, but I can’t say I’ve heard Sonic say “Yee Haw” in the past, and I have no idea why he sometimes says “Don’t text and drive” as if he’s in a PSA after being busted for that very crime. They might have been funny the first time, but they quickly wore on me. While there is a slider to turn down the voice audio in the options menu, it mutes the announcer as well, who is actually pretty decent. Other nitpicks include that the items are now Wisps from Sonic Colors, which aren’t as immediately recognizable as iconic Mario Kart items, or generic rockets and boost icons, but are easy enough to learn; plus none of them are a Blue Shell replacement, meaning races feel fair by comparison to modern Mario Karts.

Team Sonic Racing is hands down my favourite kart racer I’ve played in years. It introduces fun new team-based mechanics, makes it easier for less experienced players to have fun while giving room for the more competitive of us to shine. At a budget price, it’s easy to recommend for kart racing fans, and will certainly be a 10/10 for Sonic fans. I had a better time with this than Mario Kart 8 Deluxe, which is saying something.