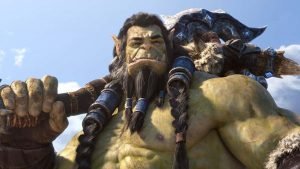 Thrall is an orc who was once the Warchief of the Horde. In the cinematic, Varok Saurfang approached Thrall in Outland and asked him if his current situation was “home” and if he knew about the actions of the current Warchief, Sylvanas Windrunner.

In response, Thrall gave a meaningful glance at Saurfang’s necklace, which once belonged to the older orc’s son — Dranosh. The necklace was seen in a previous cinematic called “Old Soldier,” where it was returned to Saurfang by Zekhan.

Thrall then told Saurfang, “I left that life behind. I’m no one’s savior. I will not lead the Horde.” In response, the old soldier said he had hoped Thrall would at least fight for it, referring to Thrall’s past deeds as not only the Warchief, but also the Lord of the Clans and how he had brought the Horde together and made it a “home.”

A cloaked figure then suddenly attacked both of them. After the scuffle, Thrall accused Saurfang of being followed. However, the latter explained that he was the one who followed the rogue.

Saurfang reiterated how Thrall cannot hide forever, and Thrall’s response was to kick over his anvil and grab the axe hidden beneath it. The axe did not appear to have the distinct design of Gorehowl, however, which was the weapon another former Warchief, Garrosh Hellscream, once wielded. Instead, the axe had fur accents, which made it appear more related to the Frostwolf clan.

World of Warcraft players can look forward to seeing more of Thrall and getting to learn more about his role within the Battle for Azeroth expansion and the Rise of Azshara patch in the upcoming weeks.