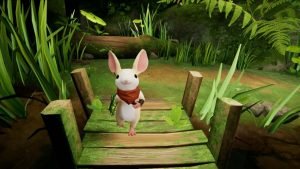 With the anticipated release of the Oculus Quest, set to arrive May 21, 2019, Polyarc, the studio behind the adorable VR title, Moss, promises to release a free update to the game, celebrating the release of the latest Oculus headset.

Best Slots You Can Play at Online Cas…
Five Things You Don’t Need To Get Hea…
How to Throw the World’s Greatest Eas…
Apple Might Be Working on ‘AR Contact…
WHAT IS BUSINESS COACHING?

The free update, dubbed the Twilight Garden, introduces a new portal for players to explore, inside the storybook world of Moss. The update, which will introduce new challenges, enemies, puzzles and areas to explore will be an exclusive timed release on the Oculus Quest platform, with platforms such as the PlayStation VR, receiving the update, come this June.

“The Quest is a game changer for the VR industry, and something we’ve been eagerly anticipating as developers specializing in VR content. Its wireless head and hand tracking technology allows full immersion in another world, simply by picking up and putting on a headset, regardless of where you are,” said Josh Stiksma, principal designer, Polyarc. “Now you can explore the whimsical fairytale from home or on the go as you travel, commute, and visit friends or family. In addition, to make this experience even more magical, we’ve updated the game. Players may now discover and explore new content hidden within the world of Moss.”

Moss first saw release on the PSVR platform in February of 2018, the game was praised by critics for its whimsical world and unique use of virtual reality. With CGMagazine’s own, Chris Carter giving the game a 8/10, praising the title for its unique identity and charm.

Moss is available on PlayStation 4 and Windows PC. The Twilight Garden downloadable content will be available first on Oculus Quest, May 21, the release day of the headset itself. PlayStation fans will be able to get their hands on the new content, later this June.

This post first appeared on CGMagazine, please read the originial post: here
People also like
Best Slots You Can Play at Online Casinos
Five Things You Don’t Need To Get Healthy and Stay Fit
How to Throw the World’s Greatest Easter Egg Hunt
Apple Might Be Working on ‘AR Contact Lenses’ To Launch by 2030
WHAT IS BUSINESS COACHING?
The EIGHTH issue #2 Review I More action, character development, and enjoyment!
Top 5 Computer Gadgets you should buy