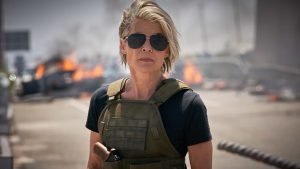 The official Twitter account for ‘Terminator: Dark Fate’ has announced that the first Trailer for the film is a few weeks away.

This news is attributed to the director Tim Miller, who showed a photo of the trailer being edited together with Sarah Connor (Linda Hamilton) holding a rocket launcher. Arnold Schwarzenegger has been confirmed to return in his iconic role as the T-800, and the film will also star Mackenzie Davis, Natalia Reyes, Gabriel Luna, and Diego Boneta.

“I like to spend every #TerminatorDay in a dark room thinking dark thoughts & our edit bay is the perfect place! We're here putting the finishing touches on our FIRST TRAILER-we're just weeks away from releasing this fucker into the wild & we're very, very excited.” -Tim Miller pic.twitter.com/Eh0gcCRi61

David S. Goyer, the writer behind the ‘Blade’ trilogy, will be handling the screenplay. Terminator series co-creator James Cameron will be producing alongside David Ellison, Dana Goldberg and Don Granger. ‘Dark Fate’ will be the sixth installment in the ‘Terminator’ franchise, though Cameron has stated that it only serves as a direct sequel to the first two films and disregards all other ‘Terminator’ works as “an alternate timeline, which is permissible in our multi-verse.”

Paramount Pictures has set November 1st as the film’s release day. CGMagazine will keep you up to date on what fate has in store for this movie.