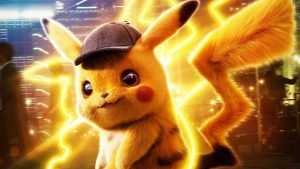 Much like the game of the same name, Pokémon: Detective Pikachu has a strong understanding of how the world of Pokémon opens itself up to more affecting and interesting stories the further it distances itself from the competitive battling that the series is known for. While its noir story is captivating, the performances of Justice Smith as Tim Goodman and Ryan Reynolds are endearing, and its special effects make almost every Pokémon who appears on screen come alive next to its live-action counterparts, I couldn’t help wondering what other stories could be told in Ryme City, where both Pokémon themselves and this world’s culture are freed from the shackles of a Poké Ball.

But the movie doesn’t start out there. Instead, we start in a fairly standard side of the Pokémon world with Tim getting a phone call from the Ryme City police telling him that his father, Harry, a Detective living in the city, and partner Pokémon were killed in a car accident. Tim heads into the city, ready to settle affairs and say goodbye before finding his father’s partner Pikachu is very much alive, and somehow able to communicate with him. Pikachu’s survival brings Tim’s father’s fate into question, and the two set out on a citywide investigation to find any clues as to what happened.

Reynolds’ performance as Pikachu is a slight, but only slight spin on his performance of Deadpool, with all the rapid-fire sassiness that entails. The dynamic between Tim and Pikachu, the former of which is more stoic, slower to trust, and seems to have some hesitation to work with Pokémon, sells the comedic buddy cop routine in a delightful and entertaining fashion. As the movie goes on and the two get more familiar, Detective Pikachu leans harder into it the emotional ties and familial connection between both Tim and his father and him and Pikachu and has some genuine tearjerker moments.

Joining Tim and Pikachu are Lucy Stevens, played by Kathryn Newton, and her Psyduck, who throw their own versions of chaos into the mix. Lucy’s a young journalist looking into Harry’s disappearance and helps Tim unravel a larger conspiracy all while operating at an 11. She’s a nice contrast to Tim’s Straight Man. The movie sets the two up as a romantic prospect, which leads to some pretty great interactions as Pikachu attempts to play wingman, but the movie has a certain degree of restraint on this front, which I appreciated and mostly uses the attraction between the two mostly for gags and even a few innuendos I’m surprised made it past the Pokémon Company. But all of this feels in line with Detective Pikachu’s darker, more adult-oriented story.

While the Detective Pikachu game took Tim and Pikachu through mysteries and conspiracies of its own, its portrayal of Ryme City wasn’t quite as seedy as it is the film, which is more akin to a real-world metropolis, with all the wonder and shady back alleys that come with it. The darker tone makes way for Reynolds’ style of humour, which just barely edges the line of what is probably acceptable for kids in places, as well as a more gripping and penetrable story altogether. As far as adaptations go, Detective Pikachu is surprisingly universal, introducing its world and characters to audiences in a way that is palatable and accessible, while also taking great care to capture the spirit of the source material in the process. That remains mostly true until mostly the final act, when Detective Pikachu dives headfirst into the deepest of Pokémon’s sci-fi, devolving into some of the strangest, unnerving, and perhaps even nonsensical possibilities this world is equipped to deliver upon. Detective Pikachu’s answers to the mysteries it presents at the outset muddy the waters of what is mostly a fairly clear cut noir film as it makes a hard right turn into a disaster genre in the eleventh hour. Even as I write this, I find myself questioning the logic of what happened in the finale, and I’m not really sure I’ve come up with any solid answers yet. At a certain point, the final fifteen to twenty minutes of Detective Pikachu becomes a showcase for the excellent special effects the movie sports, and rather than trying to wrap my head around the motives and end goals that brought it about, I resigned myself to watching Pikachu engage in some of the best action sequences the film had to offer.

Without spoilers, I will say that by the final scene, Detective Pikachu brings it back around to what it excelled at by doubling down on its emotional center of Tim and Pikachu’s quest for answers and the complicated familial connection that ties it all together. Despite the questionable finale that wraps everything up with varying degrees of success, what most sticks out to me as I walk away from this movie is that even in the spectacle and the awe-inspiring feat that is bringing the Pokémon world to life, it never loses sight of that story. In a world as vast and limitless as Pokémon, it would be easy, tempting even, to deviate from the established story and take a detour into something fans wanted to see. But Detective Pikachu never does that. It’s a Pokémon movie, but it’s not about these 800+ creatures we’ve grown to know and love. Instead, Detective Pikachu is a human story in a Pokémon’s world.