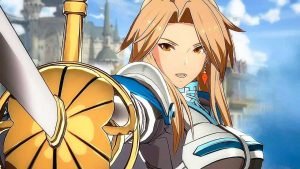 The beta is available for PlayStation Plus subscribers off-and-on from May 31st to June 1st. Signups are open now in English and Japanese, and will close on May 24th at 11:00 p.m. PT/May 25th at 6:00 a.m. GMT. This beta is primarily meant to test the game’s online features, so few, if any, offline modes will be available. The roster has not yet been announced, but it will likely consist of the initially revealed 5 characters. In the meantime, Cygames has released a trailer teasing a Versus set played by Daigo and Fuudo, two famous Street Fighter players contracted by Cygames.

Granblue Fantasy is a turn-based RPG developed by Cygames that was first released in Japan in March 2014. Available on Android, iOS, and web browsers, the game has seen massive success, boasting over 22 million players as of October 2018. The game is notable for being a mobile gacha (gambling for characters) game with a running plot; being an unusually generous gacha game that lets players thrive and get what they want without the need to buy many microtransactions; having a full official English translation in spite of its lack of an official North American release; and for reuniting music composer Nobuo Uematsu and art director Hideo Minaba, who previously collaborated on Final Fantasy V, Final Fantasy VI, and Final Fantasy IX.

Versus is being handled by the now-famous fighting game developer Arc System Works (of Dragon Ball FighterZ, Guilty Gear, and BlazBlue fame), and will adapt a portion of Granblue’s titanic roster into a grounded (by Arc Sys standards) fighting game. It is supposedly due for a worldwide 2019 PS4 release alongside its sister game Granblue Fantasy: Relink, an action-RPG with art and gameplay work done by Platinum Games (makers of Bayonetta and NieR: Automata). Cygames knows what developers to trust, and have enough funding to secure them for side-projects. Further news on these exciting games is expected in the coming months.

The post Arc System Works’ Granblue Fantasy Versus To Get A Closed Beta On May 31st appeared first on CGMagazine.