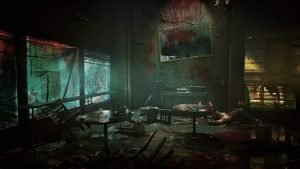 The Tremere are another full-blooded Vampire clan found within the bleak world of Bloodlines 2. Tremere Vampires are composed primarily of warlocks and those who practice dark magic. This dark sect of Vampires are generally looked down upon by other Vampires, often times reffered to as usurpers, hermetics and blood witches. Although feared, many still respect the Tremere’s uncanny ability in blood magic infusion, making them a powerful alley in some instances.

Before Tremere Vampires found refuge in the rainy city of Seattle, they could be considered a nomadic people who gave up their humanity in order to embrace immorality, albeit at the cost of a blood magic curse, origins of which have been lost in time.

Players who decide to forge an alliance with the Tremere, will, in turn, be given two powerful disciplines, distinct to those with an affinity to magic. Thuamaturgy and Auspex, with Thuamaturgy granting player’s powerful blood magic and Auspex, an expansion of the mind, giving players the ability to uncover secrets only privy to the supernatural. A full breakdown of the two disciplines can be read down below:

For even more information regarding the clans available within the world of Vampire: The Masquerade – Bloodlines 2, readers should check out the Paradox Entertainment’s reveal trailer for the Brujah. Vampire: The Masquerade – Bloodlines 2 will be available on PC, PlayStation 4 and Xbox One. And for those wanting a better look at the Tremere, may visit Paradox Entertainment’s official Twitch channel.