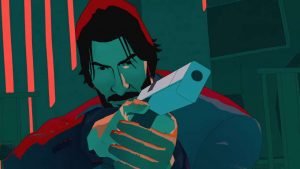 With John Wick: Chapter 3 just around the corner, publisher Good Sheppard and Lionsgate have just announced an upcoming strategy-action game starring everyone’s favourite hitman. The game is called John Wick Hex and will be released exclusively on the PC and Mac Epic Games Store on launch. A console release will be coming at a later unannounced date.

The game is being developed by Mike Bithell, the creator of games like Thomas Was Alone and Subsurface Circular. The game will be taking lots of cues from the source material, with the game’s official description calling it “choreographed chess brought to life as a video game.” The game looks heavily stylized and takes inspiration from the neo-noir and cell-shaded styles of games like Max Payne and Borderlands.

Here’s the complete description of the game from the publisher:

“Created in close cooperation with the creative and stunt teams behind the films, John Wick Hex is fight-choreographed chess brought to life as a video game, capturing the series’ signature gun fu style while expanding its story universe. Players must choose every action and attack they make, while considering their immediate cost and consequences. Every move in John Wick Hex feels like a scene from the movies, and every fight contributes to your progress on the job and requires precise strategic thinking.”

During their playtime, players will be able to unlock new guns and a handful of John Wick’s trademark suits. It’s still unclear whether or not you’ll be able to use a pencil as your main weapon, though. You can watch the full trailer below, courtesy of IGN.

While the game hasn’t yet received an official launch date, John Wick: Chapter 3 will be coming to theatres on May 17th in the US, UK, and Canada.

The post New John Wick Game to be Released Exclusively on the Epic Games Store appeared first on CGMagazine.