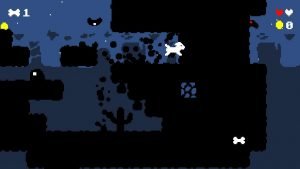 Rusty Moyher, an independent game developer, has just released Dig Dog, his second Nintendo Switch release. What makes this announcement extra special, is the fact that Moyher produced the title, without the use of his hands, instead, relying on his voice and the use of a special hat.

Dig Dog is an arcade-inspired roguelike game, where players take control of the titular dog, helping it dig through levels of increasing difficulty, in hopes of finding bones. The game features a minimalistic pixel-art style, complimented perfectly by music composed friend and composer, Matthew Grimms (whom Moyher has worked with previously).

Moyher suffers from a condition known as Repetitive Stress Syndrome, essentially making it painful or impossible to continue using one’s hands for things such as touch typing and writing. Of course, writing code generally requires the use of a keyboard, making game development seem like a pipedream for those who suffer from RSS. Miraculously, Rusty Moyher said that his silver bullet or panacea that helped him overcome his handicap came in the form of the software, Dragon NaturallySpeaking.

Dragon allows those who can’t use traditional means of writing to use their voice, which the software then translates into text. Moyher used this software to write Dig Dog in the programming language Python. Moyher states in his video from his personal YouTube, that he used the software plus special keywords that he would say orally, which would then represent a special character that Python could correctly recognize.

The art for Dig Dog was also done without the use of hands. For this job, Moyher purchased a head tracker, known as the SmartNav 4 AT, A special device made for people who suffer from ALS or other forms of severe paralysis. Moyher installed this tiny tracker onto a baseball cap. The hat has the capabilities to communicate with a mounted camera, placed on top of Moyher’s computer monitor. Through subtle movements of the head, Moyher gradually drew all the pixel-art required for Dig Dog to come to life.

Dig Dog is available now on the Nintendo Switch E-Shop for $3.99CAD.