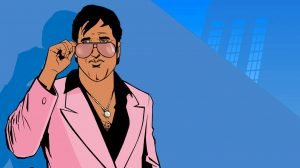 Without a doubt, the Grand Theft Auto franchise can easily be considered to be amongst the greats and a key pillar in the modern video game sphere. This is precisely why, a leak, even an anonymous one from the website, Pastebin, becomes worth talking about, especially considering that the last entry into the series, Grand Theft Auto V, originally launched all the back in 2013.

One glimmer of hope that adds some credence and believability to this alleged rumour, is the fact that the original leak that was posted on Pastebin has been removed, furthermore, the user who had submitted the leak did so using a guest account, suggesting that Pastebin administration had to manually remove the post from the site, perhaps due to pressure from Rockstar.

The leak itself promises multiple locations, with two major cities, Liberty City and Vice City, interconnected via larges stretches of road, (ala Grand Theft Auto: San Andreas). Not much information was given in terms of specifics, however, the story will allegedly follow the exploits of a two-bit drug dealer originally from Liberty City, who eventually rises in up in rank within the echelons of the crime world, finding his true calling in Vice City.

Additionally, the original post mentions that Grand Theft Auto VI will incorporate Red Dead Redemption 2‘s dialogue system, something that has never really been a part of the GTA series of games. Interestingly, the Grand Theft Auto VI leaker also mentions that the title will not be released on current generation consoles, ie: the PlayStation 4 and Xbox One, suggesting that the title is either still early in development or has been made ground up with next-gen hardware in mind (sorry, Switch owners).

Having two major cities from past games in a single title is a rather ambitious goal, one that has actually been tossed around in the past by hardcore fans of the series. In 2017, a prominent group of modders known for their work behind the modding tool OpenIV, announced that they would be ceasing all work on their project that aimed to port the entirety of Liberty City, specifically the Grand That IV iteration of the map into Grand Theft Auto V.

Rockstar sending the group a cease and desist isn’t too surprising, however, with the alleged leak that Grand Theft Auto VI may, in fact, include multiple cities, the reason behind the cease and desist suddenly becomes more evident. Of course, as is the nature of leaks, everything should be taken with a grain of salt until Rockstar actually announces they’re plans for the next iteration of GTA. Personally, as it will be the sixth entry into the series, I’d like to the see the inclusion of a world of ruin ala Final Fantasy in the next mainline GTA title.

This post first appeared on CGMagazine, please read the originial post: here
People also like
Highest earning apps use Apple Search ads
How much does a home inspection cost in Alabama?
Top Things to Do in San Francisco, California
Automatically Post To Social Media From Airtable
Accurate Football Predictions Sunday, 21st August 2022
Is BitzCex investetment broker a scam/fraud or legitimate?