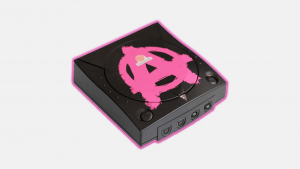 RAGE 2 is shaping up to to be one, crazy looking follow up to its last-gen, predecessor. In keeping with that philosophy, Bethesda has offered up a contest celebrating the soon to be released game, and for whatever reason, everyone’s favourite underdog of a console, the SEGA Dreamcast.

Bethesda made the announcement earlier today, through their official Twitter, which can be viewed below:

Follow and RT for a chance to win this custom Dreamcast — and yes, it actually plays #RAGE2! https://t.co/0PRi91zYfI pic.twitter.com/oNRYt5sJW2

Unfortunately, the “Dreamcast” that is up for grabs, is actually a custom-built desktop computer, valued at aproximately $590 USD. Nevertheless, collectors, Rage fans and even SEGA fans should take note, as the device itself looks rather convincing yet distinctly adherent to RAGE 2’s design rhetoric.

The case for the custom built machine looks similar to the rarer, black variant of the Dreamcast Console, which often times were sold, bundled with sports titles. Aside from the black moulding of the chassis, the limited edition console also featured sports-centric branding on the top of the lid, alongside the iconic SEGA Dreamcast spiral.

Readers interested in the chance of winning the one-of-a-kind SEGA Dreamcast themed RAGE 2 machine can do so by simply retweeting Bethesda’s original post. For full contest details, readers are encouraged to check out the tweet attached above. SEGA first released their Dreamcast console in 1998 in Japan, and then the following year worldwide.

RAGE 2 is shaping up to be a much more ambitious, open-world game, more reminiscent of bethesda’s other popular franchise, Fallout but while still retaining the core, over-the-top gunplay that made the original RAGE so appealing.

RAGE 2 will be available on PlayStation 4, Xbox One and PC this May 14.

The post Bethesda Embraces the Retro Aesthetic of the Wasteland with RAGE 2 Dreamcast Console appeared first on CGMagazine.