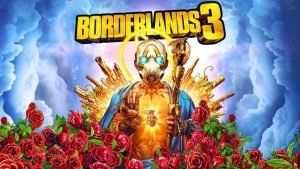 The highly anticipated reveal for Gearbox’s Borderlands 3 is finally upon us. Readers below can get their first glimpse at the world premiere gameplay for the title below.

Greg Miller, Andrea Rene and Fran Mirabella III hosted the preshow, informing the audience about the Vault Insider program and delving into the initial PAX reveal trailer for the game. The group went on to talk about their memories of the game and in case of Fran, his first exposure to the series.

The actual presentation opened with Creative director Paul Sage and Gearbox founder Randy Pitchford taking the stage, before introducing the rest of the Borderlands 3 dev team to follow suit and join them.

Emphasis was given to AMD driven hardware, showcasing Pandora rendered with AMD tech before jumping into the game proper.

The Demo opened with Amara, the player Character, receiving an Echo-3 device from pseudo series mascot, Claptrap. The first mission, which also acts as the tutorial tasks the player in infiltrating raider forces, specifically, an area that featured members of the organization known as The Children of the Vault, a new cult which has risen in notoriety on Pandora, the starting planet of the game.

The demo went on to show off something known as the Quick Change machine, which as the name suggests, allows players to quickly customize a wealth of cosmetic features of their player character, including everything from headgear, skin tone, emotes and menu skins ( the menu can be found with the echo3).

Different gun modes were shown off, featuring a sidearm or pistol that has the ability to switch from a rapid-fire mode to a slower but stronger slug round, secondary firing option. Various ammo types such as ice and fire were also teased. The over the top violence seems to be as insane as ever, with character appendages and bodies seemingly filled to the brim with bloody good, bathing the screen with cartoony carnage upon damage.

Shiv, the first boss of the game was shown off, whom like in typical Borderlands fashion, looked like a heavily deformed raider character type with short, spindly arms and a large tumrouos body. After the fight, a short scene in which Clap Trap becomes incapacitated highlighted the revive ability of the game, in which players can now review NPC characters and vice-versa.

Following the first boss, the player is introduced to Lilith, the leader of the Crimson Raiders, before the group is ambushed by additional enemies.

The demo then jumped to another area in the game, known as the holy broadcast centre. Before heading into the level, Amara’s phase altering moves were highlighted. Her specific move-set seemed to feature brute strength with larger AoE skills. Individual skills can all be augmented further, making each of the 3 character classes feel distinct, even when a player is the same base class as their friend.

A new enemy class of radiated raiders were prevalent in this area of the demo. Radiated enemies seem to explode and cause additional damage upon death to the player. Next, cooperative play was shown off, with things such as loot instancing and balancing tweaks being as the central focus. Loot instancing, in particular, was interesting, as it offers loot specifically tailored to the level of the individual player, meaning a level 5 player versus a level 25 player will receive gear that is appropriate to them.

The co-op player, Zain featured skills reminiscent of a super soldier character archetype. His moves were espionage focused and meant to disorient enemy targets. One of Zain’s most useful moves shown off on stage would be his ability to mark individual targets, which then can be attacked by his deployable drone ability, for additional damage.

Special, disposable guns were given some screen time, which unlike traditional weapons in the game, can be thrown or deployed during encounters, each offering a unique AoE effect on the field, such as guns that can walk or bounce around and explode (think grenades but guns).

Mouthpiece, another boss encounter, who admittingly looked a lot cooler than Shiv, was shown off next. His encounter took place on a stage, reminiscent of a concert venue. Mouthpiece, as the name might suggest appeared to be a roided up musician with guns that fire neon soundwaves, instead of traditional bullets, whom upon death relinquishes his weapon to the player.

One of the more interesting things shown off during the demo came in the form of Sanctuary III, the home base ship, or hub area of the game. The ship seems fully customizable, conforming to the distinct style of each individual character type. Sanctuary III also gives players easy access to the loot that they may have missed out on during their exploits planetside. The bridge of the ship was then shown off, giving the audience a glimpse of Pandora from orbit. From here, players can actually visit other planets. The demo then took the player to the planet Promethea.

A new gun that can shoot tracking darts were given some screentime, this unique weapon has the ability to mark targets, switch ammo types and then automatically hone in on said tagged enemies (ala Fifth Element). Promethea itself, unlike Pandora which looked more like a typical, desert wasteland, featured futuristic skylines and a cooler colour palette, kind of like if Dubai existed on its own planetoid, rather than being here on Earth.

The demo ended with a teaser for the character Zero, who on first glance appears to be a cybernetically enhanced ninja, ala Metal Gear. Before the presentation concluded, one final trailer for the game was shown off.

Borderlands 3 was first officially announced back in March, with the game currently set for release this September on PlayStation 4, Xbox One and PC. Borderlands 3’s PC release will launch exclusively on the Epic Games digital storefront.

The post Gearbox Opens the Vault on Borderlands 3 with Extended Live Showcase appeared first on CGMagazine.