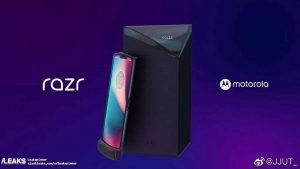 Render of Motorola’s revived Razr smartphone may have just been leaked, demonstrating its foldable design and accessories.

In a now-deleted post on Weibo, three renders were posted showing the Razr alongside its accessories and a triangular carrying case for them all. The phone is harkening back to the old days of flip phones by sporting a touchscreen that can be folded vertically, going from compact to a normal-sized phone. This sets it apart from Samsung’s Galaxy Fold, a traditional smartphone-sized device that vertically unfurls to a tablet shape. In a callback to the early-2000s design of the Razr, it still has a bottom chin that juts out somewhat. It has not been confirmed, but there may be a smaller screen on the back of the revived Razr much like the original, which would be used when the phone is folded up.

The Wall Street Journal’s original report from January claimed that the phone would be priced at around $1,500. No release date has been announced, and it seems as though Motorola is waiting on its competitors to speak before making a move.