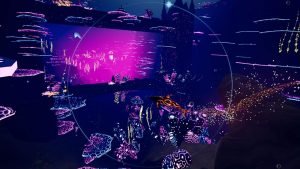 Jupiter & Mars is a game that immediately grabbed my attention, due to its striking visual style, and when I found out that the title would support the PSVR platform, I knew that I had to check it out.

Jupiter & Mars isn’t your typical romp through some strange world filled with monsters or gamey adversaries, instead, Jupiter & Mars’ biggest threat is that one of mankind and the destruction brought upon the seas, through years of pollution and rising water levels. If this sounds like an excuse to teach potential players about real-world, global warming concerns, you’d be correct. Thankfully, unlike edutainment games from years past, Jupiter & Mars is a game first, and a lesson in ecological preservation and marine biology, second.

Although simple, Jupiter & Mars does offer players with a bit of exposition that sets up the story. In the distant future, many cities and urban centres have fallen to rising water levels. human beings, which the game refers to as Earthwalkers have vanished, leaving behind their pollution-producing machines, players take control of Jupiter and the AI companion, Mars, tasked in exploring various mini-biomes that make up the larger game world of Jupiter & Mars. 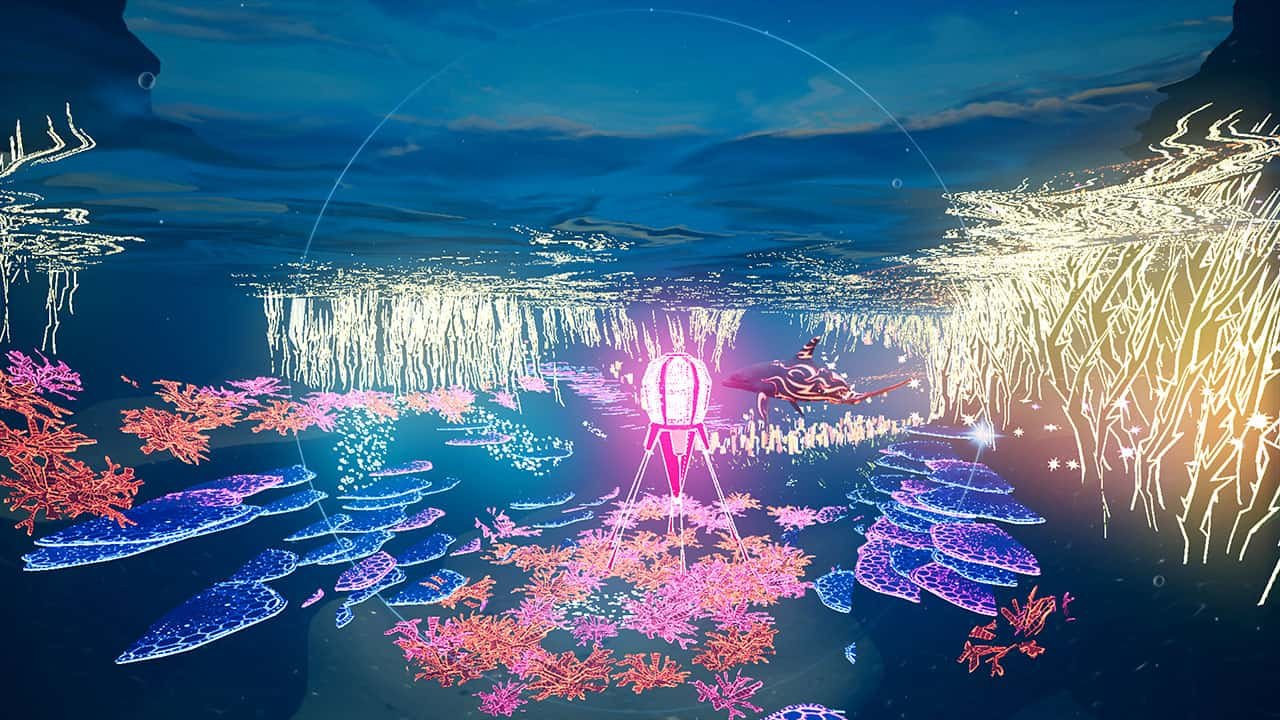 Each level or biome seems to be loosely based on real-life locations, such as New York City, London and a handful of tropical undersea environments. I say loosely, as visually, Jupiter & Mars employs a visual style similar to that of games like Rez and the recently released VR title, Tetris Effect. The game strives for an 80s inspired futuristic look, with exaggerated keylines around objects and structures of importance that glow when the player uses echolocation. Pressing the X button, which allows players to use echolocation is a cool concept that takes advantage of the title’s unique art direction, unfortunately, the same can’t be said about when playing the title in VR.

Although Jupiter & Mars can be enjoyed in VR, the overall experience is much better, when played on a TV or monitor. The VR implementation, in terms of controls, feels great, players have the option to use their head to move and thanks to the pace of the game, those who may suffer from VR-induced nausea, can rest-easy, as Jupiter & Mars is a fairly relaxed affair. Sadly, the same can’t be said about the title’s visuals when played in VR (even on PlayStation 4 Pro). 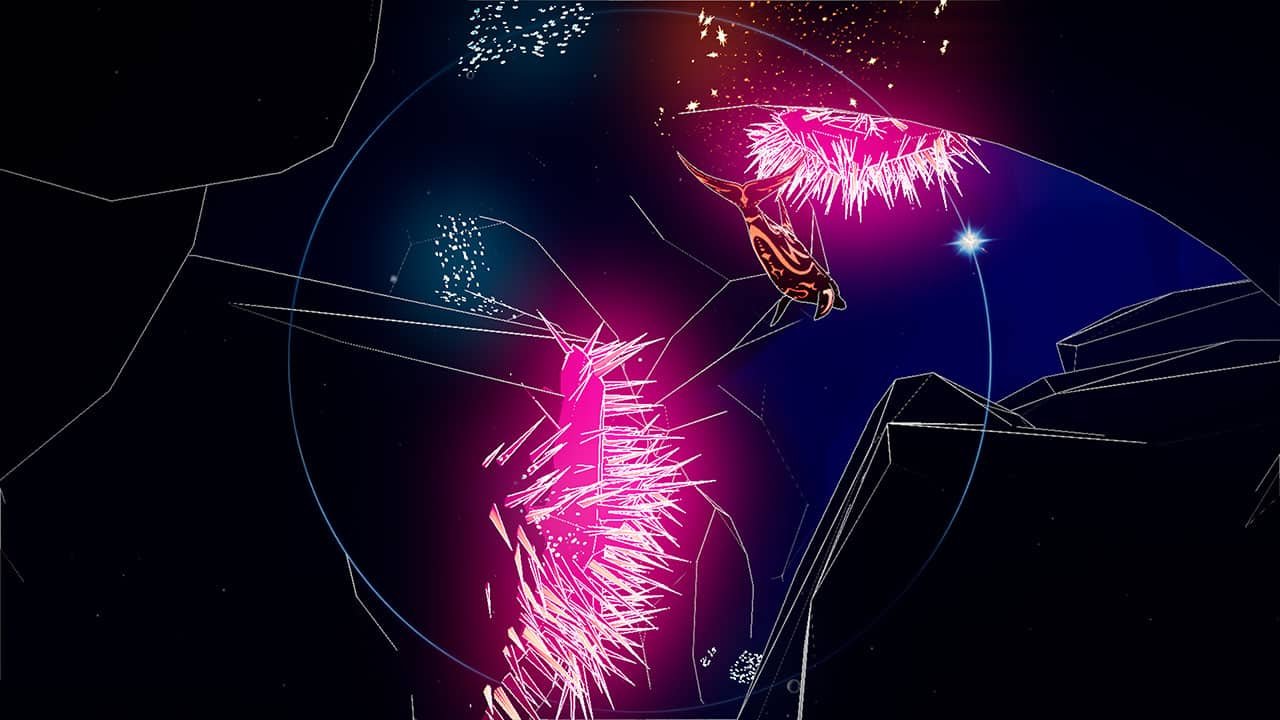 In order to maintain a high enough framerate for Jupiter & Mars to work in VR, the title seemingly abandons any form of anti-aliasing, resulting in a game that looks like an early Wii title, or in other words, a mess of jaggy polygonal models that become barely recognisable, to the point where I had to switch back to playing on my TV, as I found the dip in visual fidelity too distracting otherwise.

Even still, Jupiter & Mars is a cool and informative game, featuring real-life organizations such as The Ocean Foundation, and as the title is an exploratory game, players can use the game as an interesting learning tool spread across a 4-6 hour experience.  I think my only real complaint with the game, in terms of gameplay, would be that the actual title feels a little too easy and none of the collectables actually do anything. It would have been nice to see additional facts or tidbits that could be gleaned from finding the various collectables found within the game world (there are a lot).

Like its neon-soaked facade, Jupiter & Mars also features music that appropriately fits the futuristic style of the game with a heavy emphasis on synthesized sounds, intermingled with more traditional sounding tracks that ultimately help bring the game together. 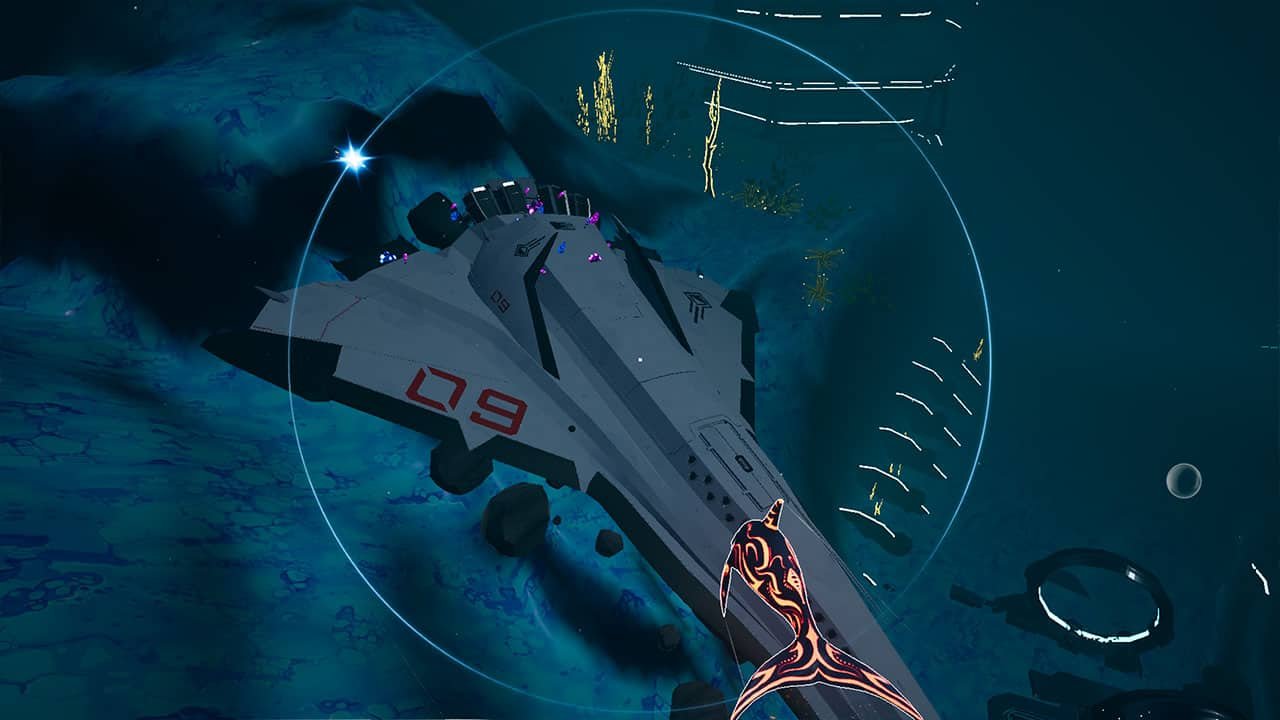 Jupiter & Mars is definitely a unique game, blending styles and genres together in a concise package that shouldn’t really work but somehow does. The biggest thing holding the game back from greatness is the poor visual quality when played in VR. Thankfully, with the recent announcement that the PlayStation 4’s successor will support legacy PSVR titles, there is a chance for Jupiter & Mars to truly shine when played on appropriately powerful hardware.