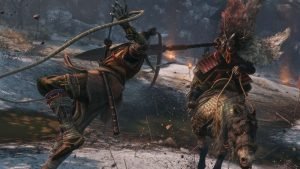 Though you will face many tough mini-bosses in the early hours of Sekiro: Shadows Die Twice, the first proper boss, Gyoubu Oniwa, is another challenge entirely. With his high movement speed and long range thrust and sweeping attacks, Gyouba Oniwa will be your first true test in understanding Sekiro’s mechanics. In this Gyoubu Oniwa boss guide, we’ll describe everything you need to know about this fight, including how to defeat Gyoubu Oniwa for good.

If you need some quick tips and tricks for many of Sekiro’s mechanics, check out our beginner’s guide to help get you started. 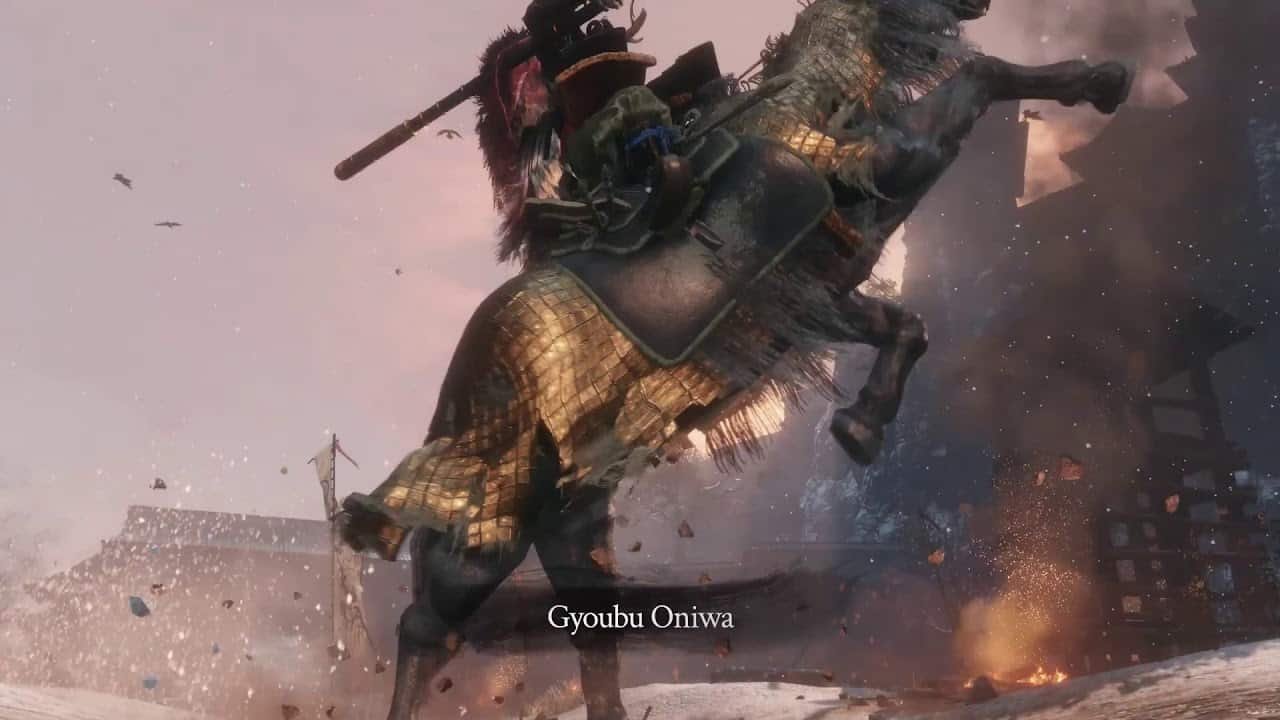 Gyoubu Oniwa is found at the end of Ashina Outskirts. From the Ashina Castle Fortress Gate Idol, you’ll make your way through a small courtyard occupied by a small group of soldiers, including some with guns. On the upper level of the courtyard, just next to a rather large gate, you’ll be able to grapple up to the peak of a roof that overlooks a massive battlefield that is filled with debris and corpses.

Once you jump down into the field and begin to walk towards the center, it won’t be long before Gyoubu Oniwa himself rides out atop his massive horse to greet you. After he introduces himself and describes his accomplishments, he’ll charge at you with spear in hand, signalling the start of the fight proper.

There is one other powerful tool that can drastically tilt the odds of defeating Gyoubu Oniwa in your favour: the Shinobi Firecracker Prosthetic Tool. If you eavesdropped on the crying soldier near the entrance to the battlefield, you’ll learn that horses are frightened by explosions. Luckily for you, there’s a prosthetic tool that does just that.

In Ashina Outskirts, shortly after the Outskirts Wall – Gate Path Idol, there is a mountain that you can climb with your grappling hook. If you reach the top, you’ll meet a merchant that sells several items, including an item called Robert’s Firecrackers for 500 sen. If you purchase the item and take it back to the Dilapitated Temple, you can get the Sculptor to add the Shinobi Firecracker to your list of Prosthetic Tools. You can use it to scare beasts, and more importantly, use it to stun Gyoubu Oniwa in his boss fight. 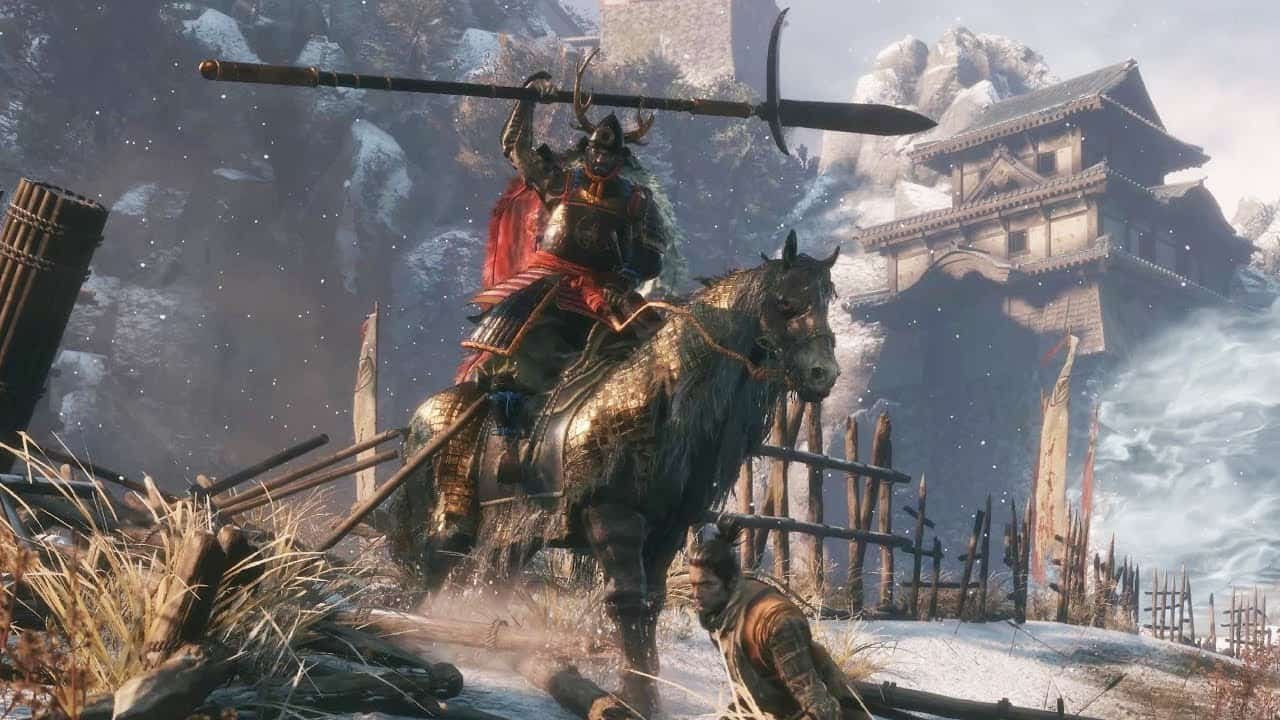 Though Gyoubu Oniwa is the first official boss fight in Sekiro, he’s actually relatively straightforward in design. His primary strength lies in the reach of his spear and in his mobility, and both can be effectively countered given the right approach and tools. Patience is key here, as continually attacking Gyoubu will result in a quick trip back to the idol after you die.

When Gyoubu reaches you at the start of the fight, charge forward and interrupt his little speech by attacking him. He will not attack you while he is talking, and you should take advantage of that to get a few free sword swings in to get an early advantage.

Gyoubu prefers to ride around you in wide arcs, taking swings at you with his spear regularly that has a very wide range. Rather than dodging, parry each of his strikes in order to stay as close to him as possible. When Gyoubu is further away from you, he’ll have plenty of time to charge at you with his spear that deals a massive amount of damage if it lands. By staying close, you can mitigate the number of times he uses that ability. 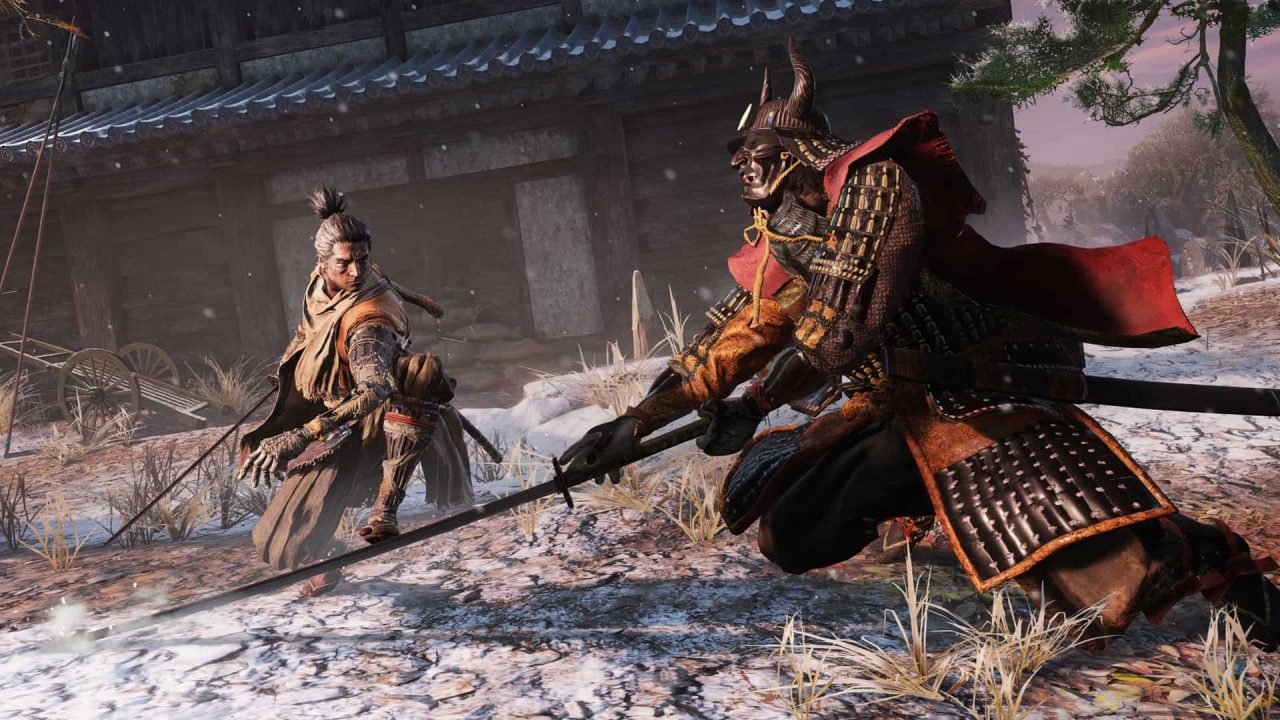 The best location I found to fight Gyoubu is near one of the stone walls that are on opposite sides of the arena. If you can keep Gyoubu’s back to the wall, you’ll have a significantly easier time scoring hits on him as he lacks the room to move. In close range, he typically likes to attack two to three times in a row, so get ready to parry multiple strikes. If you can parry a combo, he’ll be briefly susceptible to your own attacks. For the most part however, you’ll want to focus on deflecting his attacks to build up his Posture meter.

Despite your best efforts, it’s likely that at some point Gyoubu will ride off to create some room between you two. Fortunately, Gyoubu is one of the few enemies whom you can grapple from a distance, allowing you to get right up in his face again without having to worry about dodging an attack. When the green grapple symbol appears over his head, activate your grappling hook to catch him off guard. This grapple always creates enough space to get two to three hits on him, and you’ll never have to worry about him blocking if you successfully pull off this move. And if you can’t get the grapple pulled off in time, be careful, as this is likely when Gyoubu will unleash a spinning attack that has a wide area of effect and deals plenty of damage.

While fighting Gyoubu, keep an eye out for opportunities to use the Shinobi Firecracker. Not only can you score five to six hits on him when you successfully use it, you can also interrupt his attacks. This time can also be used to back off and use a healing item if you’re wounded, but I recommend attacking him at this time to get the most out of the Shinobi Firecracker’s limited uses.

Once Gyoubu’s Posture meter is full, you can go in for a Deathblow. Like most bosses, you’ll need to pull off two Deathblows in order to put Gyoubu down for good. Once you achieve the second one, you’ll be prompted to perform a Finisher Deathblow, which is enough to end Gyoubu’s ride for good.

Defeating Gyoubu earns you a Memory: Gyoubu Oniwa, which you can use at a Sculptor’s Idol to increase your attack, as well as a Mechanical Wrist Barrel item that you can use to upgrade your Shinobi Prosthetic at the Sculptor. Apart from that, congratulations! You’ve defeated Gyoubu Oniwa, and earned the right to advance further into Ashina Castle.