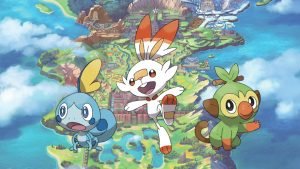 After what seems like eons, the newest entry in the Pokémon series has finally been revealed in the form of Pokémon Sword and Pokémon Shield.

The new games were announced during a special seven-minute online presentation and they mark the beginning of the eighth generation of Pokémon games. While the video didn’t reveal all that much, it did show off the new Galar region where the games take place. The region features many distinct locales, including mines, mountains, cities and plains, and there will no doubt be more revealed in the future.

Nintendo also showed off the three new starter Pokemon for the game. They are the grass/ monkey Pokémon Grookey, the fire/rabbit Pokémon Scorbunny, and the water/lizard Pokémon Scobble. Similarly to other mainline Pokémon games, trainers will have the option of choosing one of to start their adventure with. That being said, the presentation did also show off a couple of older gen Pokémon like Pikachu, so it looks like there will be many options to build your team from.

Unsheathe your Sword and take up your shield!

The world of Pokémon expands to include the Galar region in Pokémon Sword and Pokémon Shield, coming in late 2019! https://t.co/chWXMCQF39#PokemonSwordShield pic.twitter.com/yhp441Cq56

Gameplay-wise, Pokémon Sword and Shield looks similar to past entries in the series and isn’t open-world like many people were anticipating. The game is set to release sometime in late 2019, and Nintendo teased that there will be more unannounced Pokémon projects coming this year as well.

The first Pokémon games were released back in 1996 and were named Pokemon Red and Pokemon Blue. Since then the series has featured a wide array of games and spinoffs including the widely successful mobile game Pokémon Go, and last year’s Let’s Go Pikachu and Let’s Go Eevee games. The announcement came one day after the release of the second Detective Pikachu Trailer, which featured a wide array of Pokémon.