Overwatch: Baptiste Revealed As Hero 30 Along With Gripping Origin Story 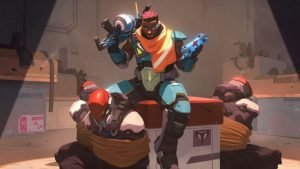 The YouTube video, featuring artist Nesskain’s work, detailed Baptiste’s journey and revealed some Overwatch lore, in which 13 million children were orphaned because of the omnic war. Baptiste, one of those children, initially believed he was robbed of his choices and had to do whatever it took to survive.

The Eight Wives of Henry VI society (…
What You Should Know About Disability…
You’re Not Alone; It Gets Better
Capture Attention and Drive Traffic w…
TFT#513,🔥FREE 380₹(Only Today)🔥,IQOO …

It was either steal or starve and killed or be killed to Baptiste. “If you are hungry to rise above your circumstances, then when someone offered you a hand up, even the Devil, you took it. It wasn’t complicated,” he had told himself, referring to the Caribbean Coalition.

Later, Baptiste realized that simply making a living and surviving wasn’t enough — he had to make a difference. “For some, that means a bandage, for others… a bullet,” he said.

In the reveal video, Baptiste carried both a weapon and a health pack while he sat on top of a crate labelled with the Talon symbol, indicating that he may be both a Talon support and damage dealer at the same time.

This is supported over on Twitter, as Overwatch League team Florida Mayhem emphasized the need to make a choice between a bandage or a bullet. The official Overwatch Twitter replied with a gif indicating that “why don’t we have both?”

Just last week, Baptiste was teased by the official Overwatch Twitter page in the form of an encrypted message. It provided Overwatch players a link to a recovered log written by Talon member D. Cuerva, which revealed that Baptiste later deserted his Talon unit involving characters named Pacanowsky, Mazzei, and Doubleday.

Baptiste’s skills as a damage-orientated support hero was again highlighted in the letter. “I’ve never known a medic to be such a good shot, and his adaptability to new situations is a rare talent,” the letter read.

More information on Baptiste may be revealed when he joins the Overwatch PTR.

The post Overwatch: Baptiste Revealed As Hero 30 Along With Gripping Origin Story appeared first on CGMagazine.

Overwatch: Baptiste Revealed As Hero 30 Along With Gripping Origin Story