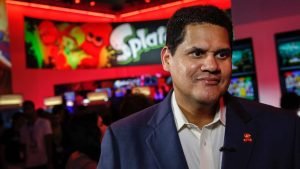 After more than 13 years at the helm, Nintendo of America President Reggie Fils-Aime is taking off his red cap and entering the world of retirement.

The news was announced today by Nintendo, and the company also revealed that April 13th will be Fils-Aime’s last day as President. Fils-Aime was the first American President of the Japanese gaming giant and he helped shape the company into the entertainment powerhouse that it is today. He released a brief statement thanking Nintendo while also giving fans a look into his future plans.

“Nintendo owns a part of my heart forever,” Fils-Aime said. “It’s a part that is filled with gratitude – for the incredibly talented people I’ve worked with, for the opportunity to represent such a wonderful brand, and most of all, to feel like a member of the world’s most positive and enduring gamer community. As I look forward to departing in both good health and good humour, this is not ‘game over’ for me, but instead ‘leveling up’ to more time with my wife, family and friends.”

Nintendo fans, Reggie has a message for all of you. Please take a look. pic.twitter.com/EAhaEl5oEJ

Fils Aime will be succeeded by none other than Doug Bowser, the current Vice President of Sales and Marketing for Nintendo of America, and the guy with the best name in video games. He joined Nintendo of America back in 2015 and was the chief force behind the marketing of the widely successful launch of the Nintendo Switch. Before that, Bowser worked for Electronic Arts as the Vice President of Global Business Planning and also worked as a sales lead for Proctor and Gamble. Bowser thanked Fils-Aime for his years of service while doubling down on Nintendo of America’s misison going forward.

“It has been my great fortune to work with and be mentored by Reggie for four years at Nintendo of America,” Bowser said. “And rest assured, we will continue to build on his work to evolve and expand our brand, furthering Nintendo’s global mission of creating smiles. There are millions more of those to come.”

As for Reggie, he has very much been the face of Nintendo for the last few years, regularly appearing in the company’s Nintendo Direct presentations and Treehouse Live events. He has become one of the most recognizable personalities in the video game world and his warm, gentle demeanour is one that will be hard to replace. One thing that is clear is that E3 2019 will probably be the first Reggie-less E3 in the past 13 years, and it will no doubt be interesting to see what that looks like.