Rumour: Scalebound Is Being Developed for The Nintendo Switch 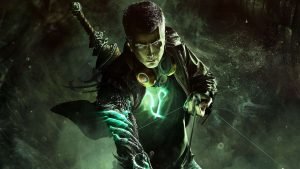 According to a recent report from Nintendo Insider, the cancelled Xbox Exclusive Scalebound may be on its way to the Nintendo Switch. The title was being developed by Platinum Games and helmed by industry veteran Hideki Kamiya.

When it was first shown off in 2015, Scalebound was an open-world action RPG about slaying beasts, akin to games like Dark Souls and Monster Hunter: World.

“I have confidence in my sources to report that it is my understanding that Scalebound has been resurrected as a project to be released as a Nintendo Switch exclusive,” writes Alex Seedhouse of Nintendo Insider. He continued by saying that “given Microsoft’s previous involvement, it remains unclear to me whether development has been completely rebooted from scratch or, at the least, its ambition scaled back – seeing as it’s now destined for the nimble, but less powerful, portable home console.”

Whether the report is accurate or not, Nintendo and Platinum Games have certainly built up a strong working relationship. Over the years, the studio supplied Nintendo’s Wii U console with a handful of entries, including Star Fox Zero, The Wonderful 101, and Bayonetta 2.

Before its cancellation, Scalebound followed the adventures of Drew and his dragon Thuban as they explored the world of Draconis. In the story, Drew and Thuban received a supernatural bond that linked the two characters together – if one of them died, the other would die as well.

Whatever happens to the game, it’s apparent that fans are still eager to see what Platinum Games is up to. It’ll be interesting to see what the developer can manage to put together on the admittedly weaker console, and whether it’ll be able to stand up in terms of quality to the studio’s other titles, especially considering its turbulent production.

The post Rumour: Scalebound Is Being Developed for The Nintendo Switch appeared first on CGMagazine.

Rumour: Scalebound Is Being Developed for The Nintendo Switch