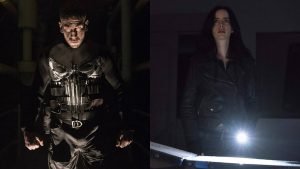 The last two flames of Marvel’s Netflix slate have officially been snuffed out.

The streaming giant announced today that Jessica Jones and The Punisher will not be continuing. They were the last two Marvel Netflix series that hadn’t been cancelled, although the writing was very much on the wall considering the impending release of Disney’s streaming service. Jessica Jones’ upcoming third season will still appear on Netflix, but it will be the last season for the show and the overall universe. Netflix released a couple statements thanking all the people that worked on both shows.

“We are grateful to showrunner Melissa Rosenberg, star Krysten Ritter and the entire cast and crew, for three incredible seasons of this groundbreaking series, which was recognized by the Peabody Awards among many others.”

“Marvel’s The Punisher will not return for a third season on Netflix, showrunner Steve Lightfoot, the terrific crew, and exceptional cast including star Jon Bernthal, delivered an acclaimed and compelling series for fans, and we are proud to showcase their work on Netflix for years to come.”

Marvel’s first Netflix series was Daredevil which debuted in 2013. Since then they have added Jessica Jones, Luke Cage, Iron Fist, The Defenders and The Punisher to their library. Many of their shows have been critically acclaimed, winning Emmy and Hugo Awards along the way.

While this no doubt spells the end for Marvel’s Netflix shows, Disney is bringing a number of Marvel TV series to their upcoming streaming service. These shows include one centred around Tom Hiddleston’s Loki, which will involve him meddling in famous events from human history. While there is no official date for the service, it is scheduled to come at some point in late 2019.