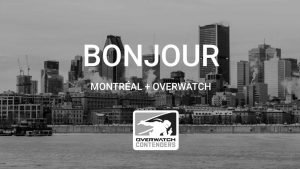 A new Canadian city is joining the world of competitive Overwatch, and that city is none other than Montreal.

The Quebec based team will serve as the official academy squad for the Overwatch League’s Toronto Defiant. They will compete in the second tier competitive Overwatch scene, which is known as Contenders, and their season kicks off on February 25th. The new team exists as a result of a partnership between the Toronto Defiant’s parent company, OverActive Media and Quebec based Mirage Électronique (MSE). Yannick Babib, the president of MSE sees the academy team as a major milestone for Quebec.

FTX US Aims to Take On OpenSea—First …
Overwatch Gets NVIDIA Reflex Support,…
5 Ways To Get Paid To Play Games

“This is a huge step toward the democratization of Esports in Quebec. We want to prove that Quebec is able to compete with the giants of esports, and this the first step in doing just that.”

The team roster will be announced in the next week and it will feature seven players, two coaches and a general manager. While many Contenders teams play together over the internet, Montreal will have a dedicated team house where the players and staff can train, live and compete in. Not only that but during season two of Contenders the team will play in Montreal’s brand new 500 seat Esports Central Arena, and every game will be broadcast in both English and French. Chris Overholt, the CEO of OverActive Media sees the new team as the next step in the company’s esports aspirations.

“We are really excited about partnering with Yannick and his team to launch the first pro esports franchise in Quebec. Today is about continuing our commitment to growing esports nationwide, and expanding our Toronto Defiant fanbase in Quebec and across Eastern Canada.”

Many current Overwatch League players got their start in Contenders including Boston Uprising Tank Cameran “Fusions” , who was a part of Toronto Esports before the organization withdrew from the tier two scene. As for the Toronto Defiant, they kick off their season tonight at 7:00 EST in a matchup against the Houston Outlaws.

This post first appeared on CGMagazine, please read the originial post: here
People also like
FTX US Aims to Take On OpenSea—First With Solana NFTs, Ethereum Only 'Weeks Away'
Overwatch Gets NVIDIA Reflex Support, With Rust and Ghostrunner Following Soon
5 Ways To Get Paid To Play Games