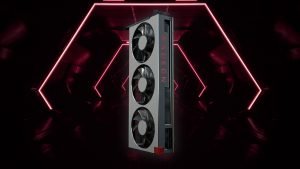 First unveiled at the company’s keynote at CES 2019, AMD has now released it’s Radeon Vii, the world’s first 7nm consumer GPU. According to AMD, the card is between 29 and 39 percent than its previous flagship GPU, the Radeon RX Vega 64.

AMD has loaded up the card with 16 GB of second generation High Bandwidth Memory operating on a 4096 bit memory interface. According to AMD’s tests, the card is able to pump out a 1 terabyte/second of memory.

The card is equipped with 2 8-pin PCIe connectors, 3 DisplayPort outputs and 1 HDMI.

The Radeon VII is in line to compete with Nvidia’s own enthusiast tier cards like the RTX 2080. Being a flagship, the Radeon VII goes for a pretty hefty $699 and is available for purchase off of AMD’s website. With the purchase of the card, buyers are treated to a small collection of games thanks to AMD’s “Raise the Game Fully Loaded” special. The games include Resident Evil 2, Devil May Cry 5, and Tom Clancy’s The Division.