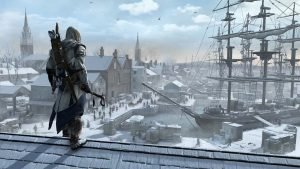 There’s some good news for those with fond memories of the third installment in the Assassin’s Creed series, or for those that haven’t given it a go yet. On March 29th, Ubisoft is set to release a remaster of the game, including its Liberation DLC and all of its other goodies.

Released in 2012, Assassin’s Creed III was a bit of an odd game for Ubisoft. It was the first numbered AC game since AC II, which is still remembered as a bit of a watershed moment for open world games. It goes without saying that AC III was an important game for the series, and boy did Ubisoft do its best.

While obviously inherently flawed as a whole, the game experimented in a lot of new ways. For one, it was the first in the series to include the same pirate-based gameplay that had such an integral role in its sequel, Assassin’s Creed IV. It also felt a lot more grounded to me than the last two games. Although it still included the half-assed Desmond backstory, the main game explored pretty mature themes in its Colonial America setting. Players could interact with a large cast of historical figures too, including Benjamin Franklin, George Washington and Samuel Adams.

The remaster is going to include 4K and HDR support along with better textures and a refined movement system.

Assassins Creed III Remastered is available now for preorder on PS4 and Xbox One.

This post first appeared on CGMagazine, please read the originial post: here
People also like
Sony to Invest An Extra $180 Million on PlayStation First-Party Games
4 Tips To Help You Plan Your Estate The Right Way
Going Bark: A Furry’s Guide to End-to-End Encryption
मुद्रा लोन लेने की पूरी जानकारी – Loan without any Security
These Flies Won’t Quite Pestering Me This Morning – Are They Triggers?