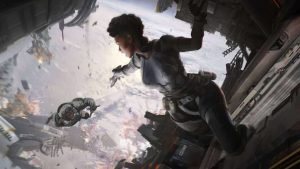 EA has had its fair share of losses, but with Apex Legend’s launch, the company has finally struck some gold, and with that success, fans are now looking forward to the potential of a new Titanfall installment. Thankfully more Titanfall games been confirmed via an EA investors call.

Sexy Games for Married Couples
How Do I Pay for Something With Bitco…
12 Best FMovies Proxy, Mirror and Alt…
How and Why America Was Hit So Hard B…

“A New Twist on the Titanfall Universe”

According to gamesindustry, During an investor call, EA CEO Andrew Willson shared that Respawn Entertainment is working on a new Titanfall title that will present “a new twist on the Titanfall universe”, more specifically a “truly creative take on what Titanfall is in a premium context”

The news comes after the massively successful launch of Respawn’s new Battle Royale game, Apex Legends, that managed 2.5 million unique users and which as Wilson told investors, has been “the number one viewed game on Twitch since launch and player sentiment seems to be very, very high right now.”

This comes as an impressive achievement for the company, as Apex Legends soft-launched with virtually no marketing, a decision done due to concerns on how the player-base would react to EA’s new loot-boxing filled .

Yet with Apex Legends being as successful as is, a lot of interest is directed towards a new Titanfall and the features it could potentially include. If anything, Respawn has now shown the public its pre-futuristic Call Of Duty development roots, a gameplay-feel that if implemented into Titanfall’s latest entry, could completely change the game’s overall demographic.

“Respawn is not working on Titanfall 3”

But new Titanfall developments don’t come without its fair share of controversies, according to the , producer Drew McCoy told Eurogamer that “Respawn is not working on Titanfall 3” and instead focusing on the continued development of Apex Legends, completely contradicting Andrew Wilson’s comments on the series’ future.

Tons of things planned for @PlayApex in the future. We are also committed to listening to player feedback.

We are also working on more Titanfall for later in the year (yes, I said the T word). We love being able to experiment in this crazy universe!

Titanfall 2 was massively well-regarded for its fantastic single-player campaign. And with the increased focus on the Titanfall brand, it is hopeful any new game in the series will face a much consumer reaction than past installments. Apex Legends is currently available free-to-play on the PS4, Xbox One, and PC via Oragin.