Tales From The Loop Tabletop Review 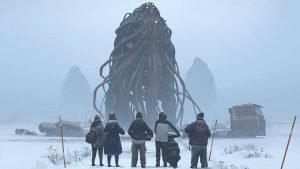 I’m running through a hot jungle with a wounded scientist on my back, it’s fifty million years ago and a T-Rex is chasing me down. I’m not going to make it, the portal back home is too far away and I’m already exhausted in this heat. I think of home and the hockey tournament I’m going to miss, will my parents ever know what’s happened to me? Just then a wood-paneled station wagon flies through the portal and comes to a stop, the door opens and my brother is waving his arms to get in the car. I dive into the backseat with the wounded scientist but the car is stalling, my brother can’t get it into gear.

We’re all screaming as the T-Rex is almost on us, “I’m trying as hard as I can!”, my brother yells, “It’s just an old lady’s Buick!”. The car revs into gear, we peel through the portal and back into the old barn out in the woods on a cold snowy night in 1986. Our friend Cas is on a computer, she’s typing away some code she’s learned to close the rift just as the T-Rex crosses over. The portal closes severing the T-Rex head as it rolls to a stop at our feet. We’ve done it, we’ve saved the entire town from dinosaurs traveling through a time portal accidentally left open by a scientist who was trapped on the other side. This time tomorrow no one will believe us, it’ll certainly be covered up by the company that runs The Loop and we’ll be back at school bored out of our minds waiting for the next mystery… 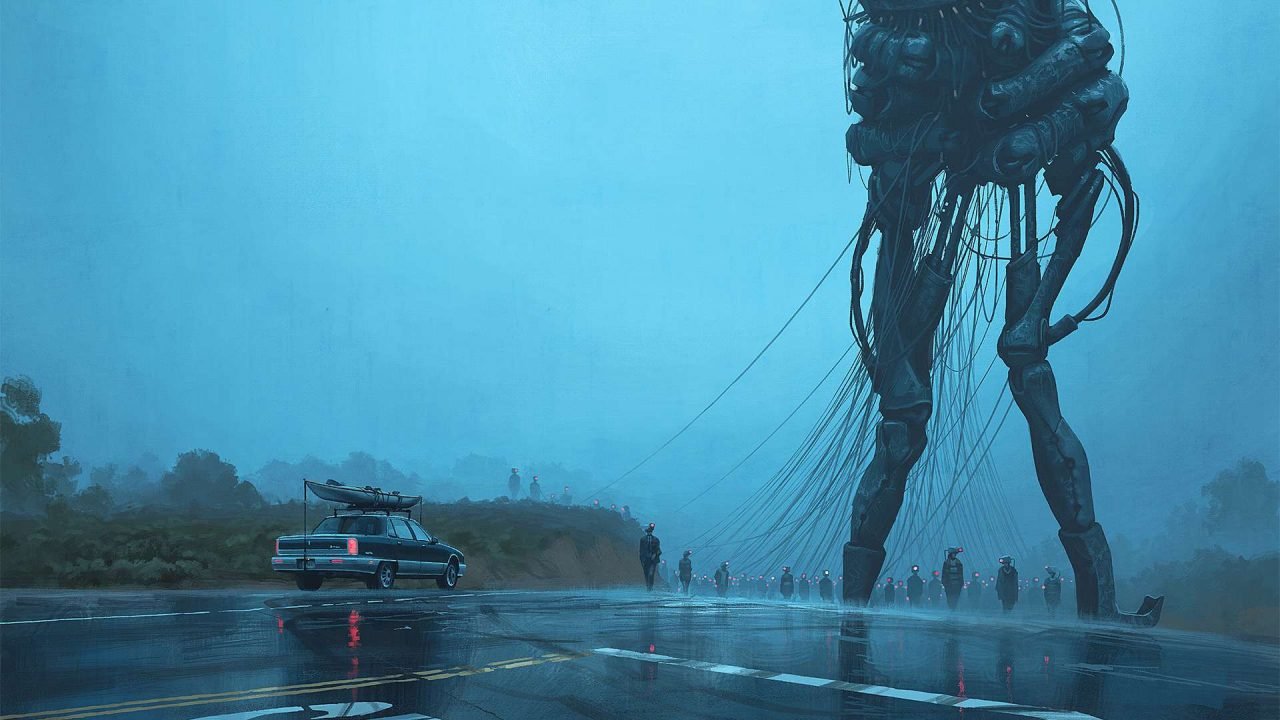 Tales From The Loop – Review Images Provided by Modiphius

Tales from the Loop is a game about playing kids in the “80’s that never was”. It started as a collection of art pieces by Simon Stälenhag, depicting scenes of kids playing in 80’s era Sweden meshed with images of giant machines, sentient robots, and dinosaurs. This was Free League’s first attempt at publishing an artbook but they’re better known for publishing tabletop games such as Mutant Year Zero and Coriolus and so it made sense that the world which Simon had depicted was too rich to ignore and they began filling in the details. The result is the closest thing to Stranger Things the Role Playing Game you are ever going to play.

The game uses Tomas Härentstam’s “Year Zero Game Engine”, first deployed in Mutant Year Zero, but you don’t need to worry about that. The rules of Tales from the Loop are simple and quick to pick up and the best part is the character creation. Each player chooses an archetype Kid which you’ll immediately lock onto and identify with (The Jock, The Bookworm, The Weirdo… think Breakfast Club and you’ll have a pretty good idea of the character classes you have to choose from). Once you have your Kid chosen it’s time to build the world. The default setting is in the mid-’80s on the Mäloren Islands north of Stockholm. You don’t have to play in this setting but it’s a good idea to know the basics. It’s a small, mostly rural, community in the middle of nowhere that has enjoyed it’s quiet existence until the government decided to build a massive particle collider, The Loop, right under their town. Now almost every adult you know works for the shadowy corporation that built the facility and ever since then weird stuff keeps happening. Being a kid in this town is mundane and boring, even though it’s 1986 you’ve grown up used to hovercrafts flying overhead, giant construction mechs, and most families will have a self-balancing (sentient) robot helping with the chores around the house. You can set your game anywhere you like, just pick a map of a small town and draw a big circle through it to represent your own Loop and you’re good to go. But don’t mess with the era, this game is all about a hyper-realized nostalgia when kids played outside and got lost for hours until it was time to get home for dinner. Sure there might be video games to play but no one can afford that luxury and this town is too small for an arcade but at least your friend knows how to run a game of AD&D for your group. 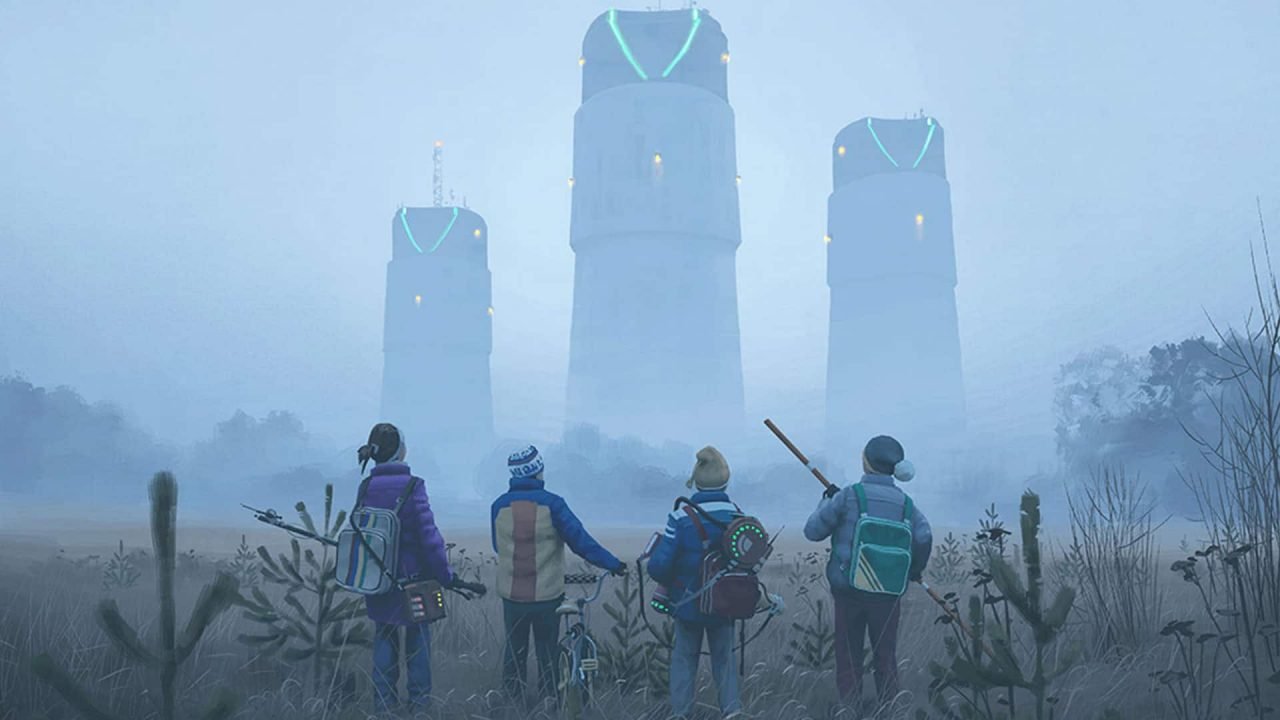 Tales From The Loop – Review Images Provided by Modiphius

Your session of Tales from the Loop will follow your Kids battling with the boring mundane dullness of life, if your GM is playing their cards right you’re going to wish you were doing anything else than whatever you’ve started on. That’s good! Unlike most RPGs it’s up to the players to find the Mystery, don’t expect any quest givers handing out missions but instead, you’ll have to follow the breadcrumbs. My play session started with us following a dog that had been reported missing and ended up with us being chased by dinosaurs through the woods and discovering a portal to the prehistoric past. Your game will start slow and build itself up to a terrific crescendo. The action is played out in scenes, proposed by the players or the GM, and most dice rolls will resolve entire steps of action. This isn’t going to play out like a Dungeon Delve with each individual action being played out with the dice, imagine you’re watching a tv show instead of a chess game. Even though your Kids can’t die in Tales from the Loop the stakes are still high, we dealt with fear, anger, and loss and even though we knew our characters would survive the GM made it absolutely clear that the NPCs we cared about were not always safe. At the end of the mystery we all knew we’d saved the town from disaster but it would have to remain our secret, after all, no one would believe us anyways! So we returned to our hideout, an abandoned shed behind my dad’s house, to play some AD&D and wait for something exciting to happen.

Justin Ecock produces the Terrible Warrior podcast and you can listen to their playthrough of Tales from The Loop at terriblewarriors.com

The post Tales From The Loop Tabletop Review appeared first on CGMagazine.

Tales From The Loop Tabletop Review