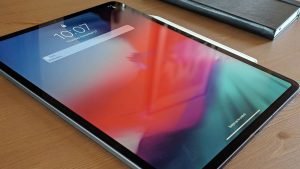 The paradigm of the computer has been in flux since Apple first unveiled the Ipad back in 2010. With the ability to power through work, games, and complex tasks, the argument for why a laptop is better than an iPad is becoming far less convincing. Further cementing this concept is the new Ipad Pro, yet another argument against the laptop workflow. However, even with so many reasons to ditch your laptop and pick up a tablet, there are a few issues that may leave some people wanting more.

After using the iPad Pro for around two weeks, I was impressed. Apple has made major steps that push computing forward. Yet for all the times I was impressed, there were a few middling aspects that forced me to have my laptop at the ready. While my job is a unique one, and I do many “power user” type things on a daily basis, for a device built for the creative in mind these issues can’t be ignored. 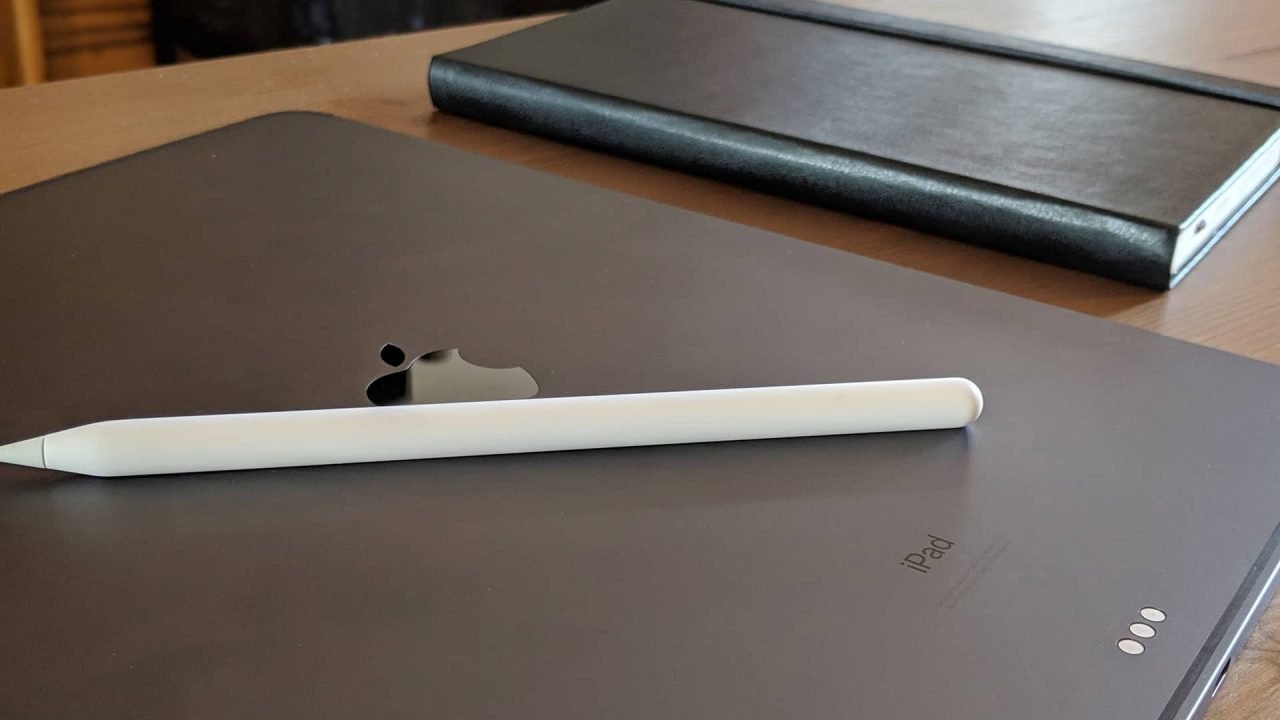 But let’s touch on what is good, and first and foremost is the design. While it may be subjective, the new look for the iPad Pro is stunning. The stark lines and industrial look of the full iPad Pro cannot be understated in regards to how much it stands out from the slew of devices on the market. Where previous iPads looked very similar to iPhones, this model embraces the edges and curves to craft a truly unique looking device—at least as unique as a slab of glass and metal can look.

The design feels very similar to the iPhone 5 range of phones (still what I feel is the best designed iPhone to date). The flat back of the 5.9mm device feels solid, with no signs of bending or buckling under pressure from daily use. The 12-megapixel camera is the only area on the device that does not maintain that smooth, sleek, industrial feel.

With this new design, Apple has opted to leave out the handy 3.5mm headphone jack, but they have moved from Lightning to USB-C. Honestly, with so many devices moving over to USB-C or Bluetooth, I had more than a few headphones and dongles on hand to test what the iPad had to offer, and the speakers on board were good, although fell a bit short of amazing.

Gone is the home button, embracing the iPhone X style of unlocking through the use of your face, or should you wish, a passcode on the screen. I will admit, I like fingerprints as a way to unlock devices, but somehow Apple made me a believer in the face unlock, and it worked as soon as I opened up the device. There were a few low-light situations where it did not work quite as fast, but after a second or two, things went back to working as normal. 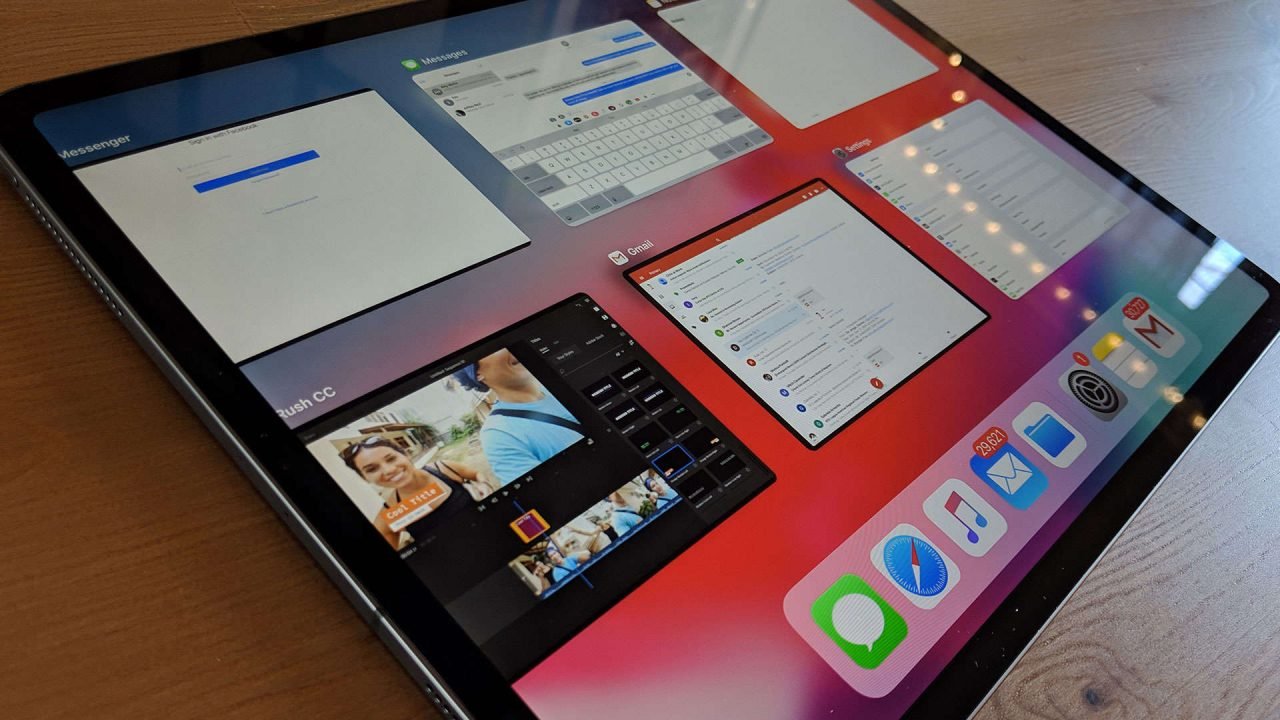 The display on the iPad Pro is a marvel to behold. It is one of the best tablet displays I have ever used. The fact Apple was able to push the display so close to the edges while still providing just enough area to hold the device was a joy to see and use. Yes, there is still the standard selfie 7-megapixel shooter on the front, and there is still the slight black bezel on the sides, but all in all, the iPad Pro is a fantastic device to hold and see in the wild.

Speaking of impressive technology, Apple’s new A12X Bionic chip is an impressive feat of engineering. It feels quick, snappy, and powerful, boasting eight cores to push polygons, browse the web, or jump into a game of Fortnite should the urge arise. While offering nearly twice the performance of last year’s model in GPU and CPU usage, it still manages an impressive near 10-hour battery life and being thrown into a messenger bag without adding any bulk.

Apple claims the iPad Pro 2018 is more powerful than 92 per cent of all laptops sold in the past year, including some of the beastly Intel Core i7 CPU’s, and went so far as to compare the GPU to that of the Xbox One S—and from testing, I would have to agree with them. While there are many gaming machines with the latest tech that will be able to give the iPad Pro a run for its money, most laptops people are using would have a hard time competing with this device in many daily tasks. No application I threw at the iPad Pro caused any slowdown, lag or even caused the device to break a sweat—it is indeed a real powerhouse.

With this year, Apple has upgraded the iconic iPad Pencil ($129) and the Smart Keyboard Folio ($179USD), and while pricey, they feel like necessary items to get the most out of what the iPad Pro has to offer. After using the iPad Pro for the review period, I am shocked at how these accessories do not come packed with the device. They show the true potential of the device, and go one step further in proving the iPad is far more than a tablet and able to compete in the creative space. 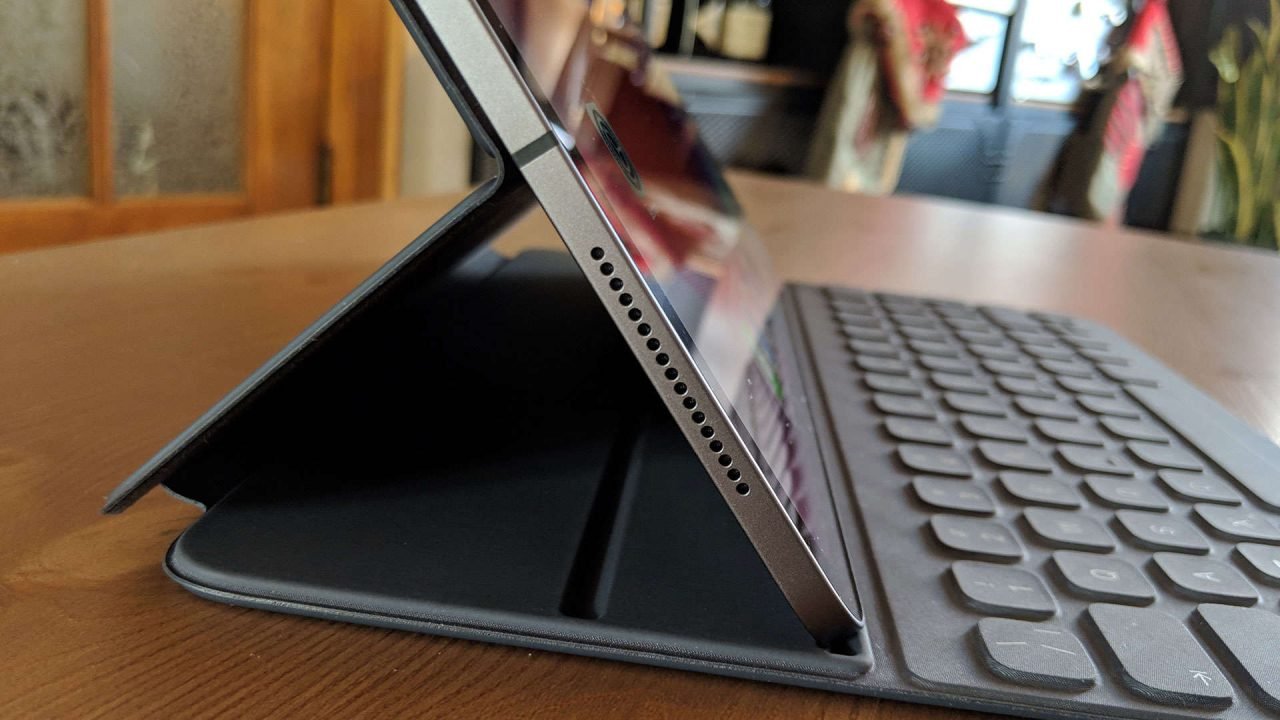 First and foremost is the Apple Pencil. This seemingly simple little device has received a retrofit for 2018. Gone is the plug-in charging, moving over to a magnetic charging system. Snap the pencil to the top of your iPad Pro and it will always be ready to use when you need it. While the Pencil has the potential to fall off in your bag, the magnets are strong and should be solid enough to carry around with ease.

Now, let’s be clear, I make no claims of being a world-class artist, but the Apple Pencil and iPad Pro combo make it a breeze to flex your creative muscle anywhere you choose. I found myself whipping it out to make notes, doodle, or just try my hand at digital painting. The level of responsiveness and precision was shocking. It felt akin to my experience with a Wacom Cintiq but at a fraction of the cost.

I even let a few of my artist friends try it out, and while they missed the macros many artists rely on for digital painting, they quickly got the hang of the iPad Pro and were impressed with the level of quality on offer for the device. Do I think it would replace someone with a Wacom Cintiq? No, but it does make for a great option for someone on the go, or for someone that can’t afford a full Cintiq setup.

Smart Keyboard Folio on the other hand simply worked. It felt like a needed addition to the iPad formula. It elevated the iPad Pro from tablet to near laptop, thanks to the keyboard and easy folding case. For lap work, I still found myself gravitating to my laptop, but the easy to use design of the Smart Keyboard Folio was a major step in eliminating my laptop from my daily routine.

And that brings us to the iPad Pro’s biggest setback, and that is the limitation of iOS. For the most part, iOS has been built from the ground up to be easy to use and understand. But for someone who wants to use my work/creative machine in a way that fits my workflow, the iPad falls a bit short on a few fronts. 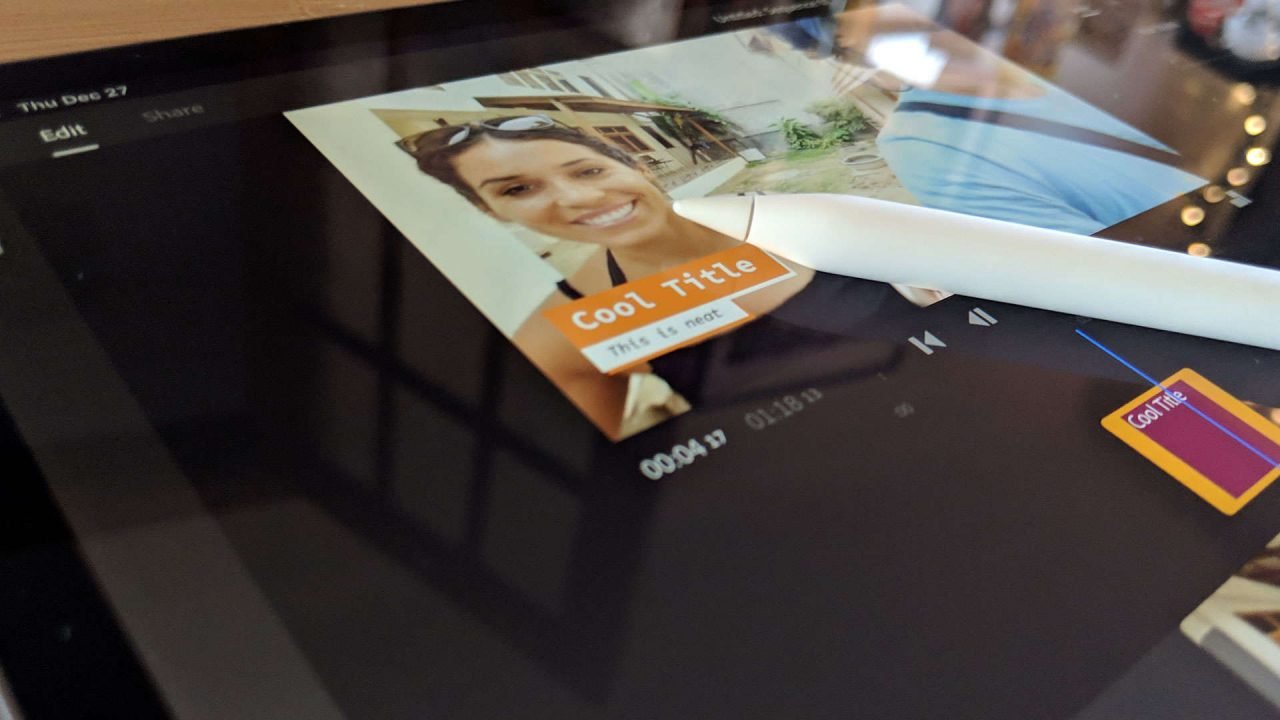 The most glaring issue for my daily routine was the lack of a final manager. When working in multiple formats across a range of devices, being able to bring them all to a central work point is paramount. Now iOS does allow you to import photos, and while testing I found this worked out well, but being limited to this one application for importing and managing files felt cumbersome.

The next issue I had was with multitasking, and this is a problem across all devices currently. Being able to quickly jump from one application into another with a quick keypress is something that is not possible on iOS. There are ways to jump around, but it always felt janky, for lack of a better word. Yes, in a pinch iOS provides the tools to do most tasks, but it never feels as fluid as it would on an OSX or Windows based setup. With only a selection of apps allowing for split-screen multitasking, this is a feature that Apple seems to be looking at, but in its current state, it is not ready for anyone looking for a laptop replacement.

Finally, there is the selection of apps currently on offer. While the iOS platform is steadily getting a stronger selection of professional level apps, their desktop counterparts still feel significantly more powerful and user-friendly. Lacking full support for the Adobe Suite or many other pro apps at present forced me to hunt through alternatives for what on a PC or Mac would be an easy solution. It should be noted that these apps are slowly making their way to iOS, with Adobe Photoshop making an appearance soon, but at present, it feels hard to find any application that can push the A12X Bionic anywhere near its limits. 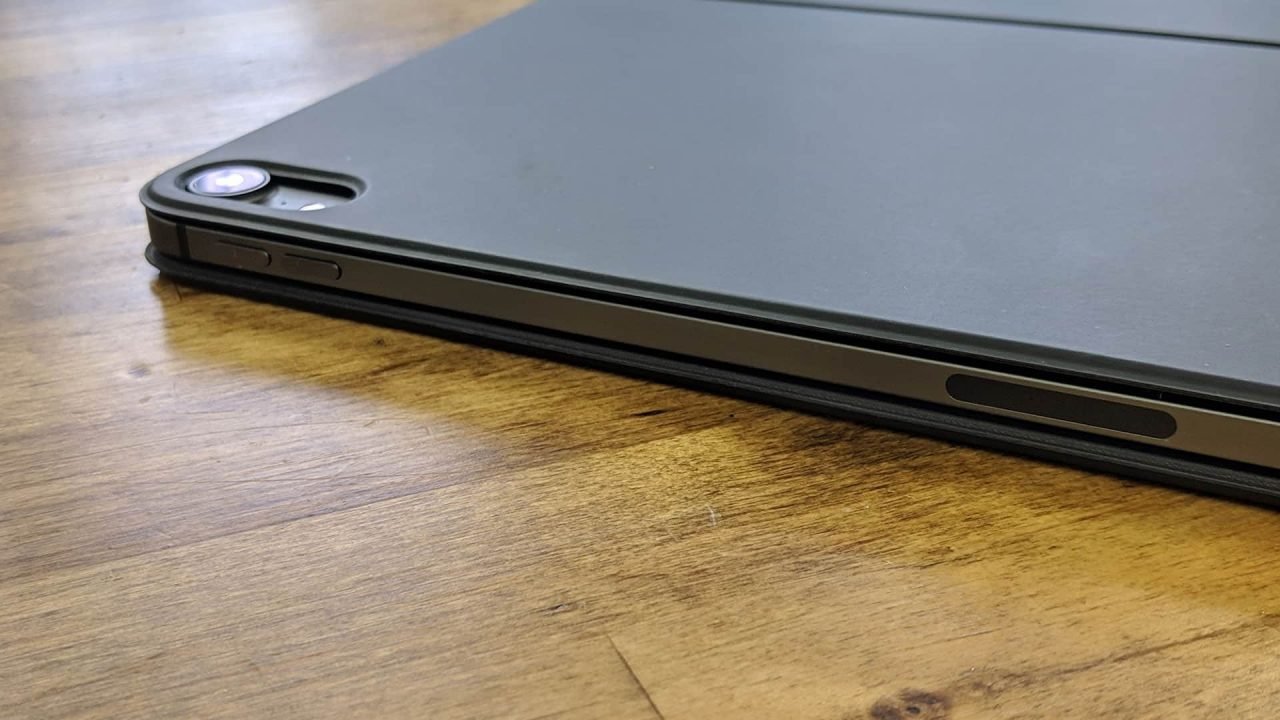 Honestly, after around a week of using the iPad Pro, I found solutions to most of these problems, and I am sure anyone reading this could as well. Apple has built a very capable device, and if you can find a way to fit it into your workflow it can be a marvelous device, I just question if it is ready to take your laptop or desktops place just yet.

The iPad Pro is without question one of the most powerful computers on the market and is a wonder of engineering. With some evolution within the iOS platform, and a few more apps, it could easily replace most people’s laptop as a daily driver. As it is now, unless you are willing to make some compromises, it sits firmly as a stunningly powerful secondary device.