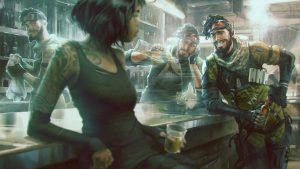 Over the past few days, there have been growing rumours about a possible Titanfall spinoff titled Apex Legends.

The game was slated to be a free-to-play battle royale game in the Titanfall universe, complete with a wide range of weaponry and class-based characters, similar to games like Overwatch and Team Fortress 2. Last night, officials affiliated with EA and Respawn sent out tweets announcing an Apex Legends live stream on Twitch at 8 am PST.

The live stream just ended a included a plethora of surprises. Instead of a reveal, the live stream was and launch and the game is out right now on PS4, Xbox and PC. The stream included gameplay trailers, character introductions and developer commentary among more.

According to EA, Apex Legends is a game set in the Titanfall universe that “shakes up the battle royale genre with a cast of unique characters, squad-based gameplay, innovative mechanics and more.”

The game is centred around the same last-man-standing gameplay that has blown up in the last couple of years thanks to games like Fortnite and PUBG, this time with “a uniquely Respawn flavour”. Before dropping, players each choose their own Overwatch-esque “hero” complete with unique gadgets and abilities. The game features a roster of 8 characters which include: “Bloodhound”, a tracker who lets players see enemy activity on the map, “Lifeline”, a medic who can help save teammates on the brink of death, and more.

One of the more innovative additions to the BR genre are the game’s “Respawn Beacons”, a new revive system located on the map that give players the chance to use a one-time respawn on a teammate.

On the stream, the developers were sure to tell fans that the game was free-to-play but was most definitely not pay-to-win. Any in game purchases and micro transactions are reserved solely for cosmetic items such as character and weapon skins. These skins will be able to be purchased individually as well as received through a season-based “Battle Pass”.

The first ever Apex Legends season is scheduled to begin in March, but in the meantime, you can play the game right now on Ps4, Xbox and Origin for PC.