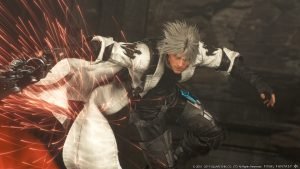 The keynote opened with an extended CG teaser trailer that showcased the game’s new Gunbreaker job, a gunblade-wielding fighter with a combat style not unlike that of Squall Leonhart, protagonist of Final Fantasy VIII. As a job in the Tank role, Gunbreakers utilize magicked ammunition to charge their explosive weapons with effects both protective and destructive. They are tentatively slated to begin at level 60, twenty levels below Shadowbringers‘ new level cap of 80, and can be unlocked in the existing city-state of Gridania. This decision was made to allow players to experience the entirety of the Shadowbringers scenario as a Gunbreaker, if they so choose.

As previously announced, Shadowbringers will include nine new dungeons and a variety of field areas. These include the Rak’tika Greatwood, a sprawling forest with settlements atop ancient tree boughs, and Il Mheg, home of the mercurial Pixies. The Pixies are ruled by their queen, Titania, against whom players will fight in one of Final Fantasy XIV‘s dramatic “Primal” trials. 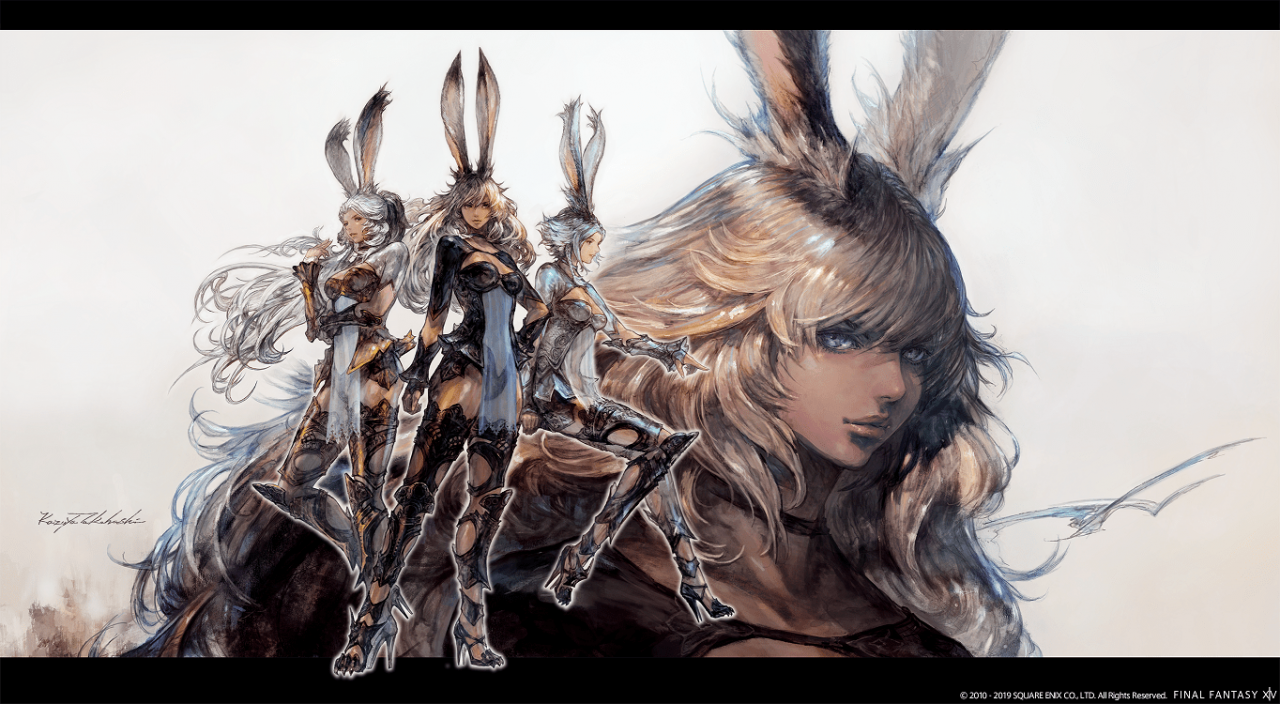 The long-awaited Viera, a race of rabbit women who first appeared in Final Fantasy Tactics Advance and were later popularized in Final Fantasy XII, will also make their playable debut in Shadowbringers. Yoshida recognized how instrumental the fans’ voices were in bringing Viera to Final Fantasy XIV, and thanked players for their patience over the last five years. The team is paying close attention to the Viera’s unique racial characteristics, and are making changes to Final Fantasy XIV‘s graphical rendering system to enable better display of helmets and the like on the long-eared, long-haired characters.

Every Final Fantasy XIV expansion to date has featured a series of “alliance raids,” pitting 24 players against a gauntlet of challenging and visually impressive foes in conjunction with an unfolding storyline that runs parallel to the game’s main narrative. In the previous expansion, Stormblood, Final Fantasy XII writer Yasumi Matsuno joined the development team to pen a tale that pulled from the world of Ivalice. In Shadowbringers, players will challenge YoRHa: Dark Apocalypse, a new series of raids envisioned by NieR: Automata writers Yoko Taro and Yosuke Saito. 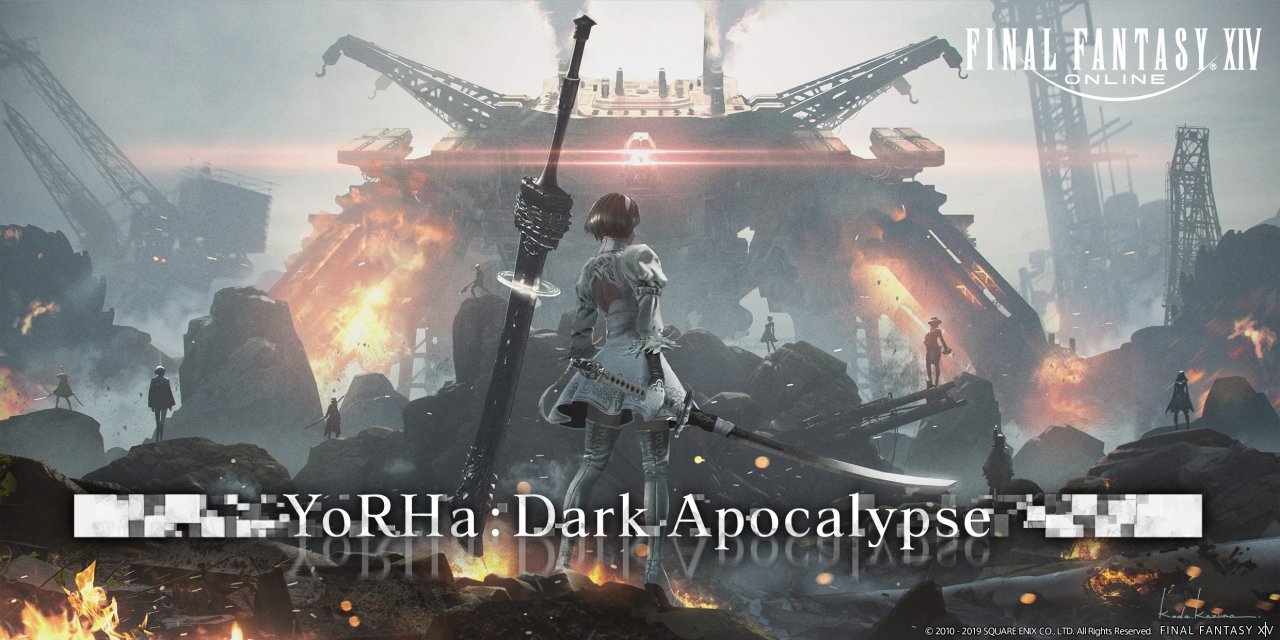 Keeping in line with previous Final Fantasy XIV expansions, Shadowbringers will be available as a standard digital/retail package and as a lavish collector’s edition. The latter includes the game software, an art book, a vinyl cling, a set of playing cards, and a Dark Knight statue, all in a collectible outer box illustrated by Final Fantasy series artist Yoshitaka Amano. The collector’s edition also includes three in-game bonuses: a Wind-up Fran minion (cosmetic pet), the intimidating Grani mount, and the Revolver Gunbreaker weapon, modeled after Squall’s from Final Fantasy VIII.Pre-orders for both editions are set to open on February 6. 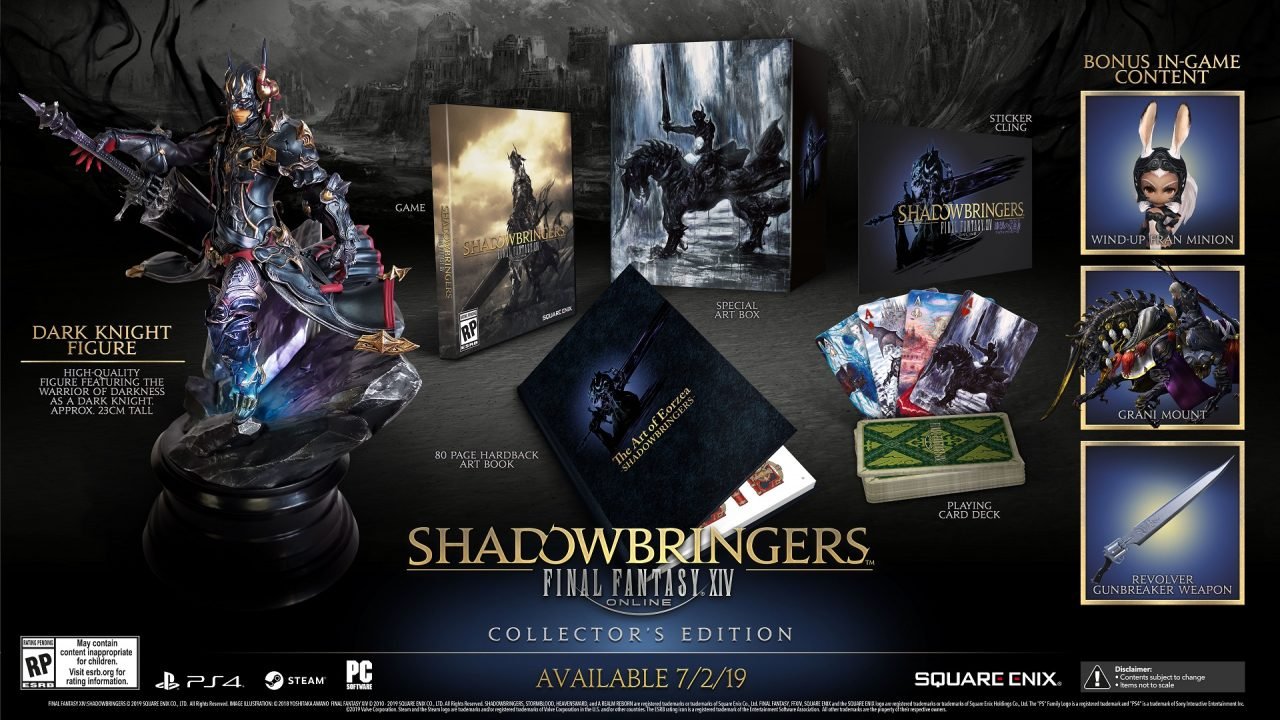 Final Fantasy XIV: Shadowbringers releases on July 2, 2019, with early access beginning on June 28 for customers who pre-order the game. Pre-ordering also grants players two items: the Wind-up Gremlin minion and a pair of Aetheryte Earrings, which scale in strength to match character level and grant a 30% experience boost up to level 70. These bonuses will be delivered as early as March 1 to maximize their usefulness in the lead-up to Shadowbringers.

More information on the eagerly-anticipated expansion to Final Fantasy XIV will be announced at the game’s Tokyo Fan Festival on March 23, 2019.