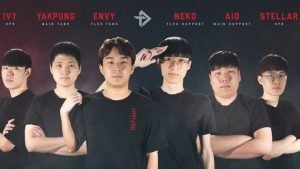 Overwatch League team Toronto Defiant just arrived for the first time in downtown Toronto. As of now, they are having a public meet and greet at EB Games. It’s a chance for them to meet their fans right before their first game against the Houston Outlaws on February 15.

Toronto Defiant’s head coach, Beoum-Jun “Bishop” Lee and player Jae-yoon “Aid” Go and sat down with CGMagazine and shared their thoughts about the meet and greet itself, as well as the core values behind it.

“A lot of people would say that in my position, you have to prepare for the Overwatch League and everything, so spending three days away from scrimming is detrimental to the team’s progress,” Lee said. “But I disagree with that. Last time I came here during the launch event, the support that the team received — it couldn’t be expressed in words — it was amazing.”

Lee added that he really wanted the players to experience the in-person community support themselves as well. He said being able to have this local meeting would further motivate the team and give them a new perspective.

Jae-yoon “Aid” Go agreed and said that the team’s mood has lightened because of this meet and greet. He added how being able to see the fans is really exciting for him.

“They need to understand that there are people looking up to them. To future, aspiring gamers, they may be their heroes,” Lee explained. “It’s really easy for gamers to get caught up in their own world. Their mindset can get a little narrow. So in order to broaden that and in order for them to grow as individuals, I think it’s important to go out and realize that the world is a lot bigger than they thought it was.”

In addition to getting to know the community, Jae-yoon “Aid” Go recalled how Toronto Defiant did a bootcamp in Korea, where he got to know everyone in his team a lot better.

“What really defines us is that no matter where you go, people can spot us from a mile away, because we are the loudest bunch,” Lee added. He further explained that while the team enjoys joking around and having a good time, they are nonetheless serious when the time comes to showcase their competitive skills. “They put their all into their profession,” Lee said.

As the Overwatch League draws near, Aid is confident that Toronto Defiant will make it far.