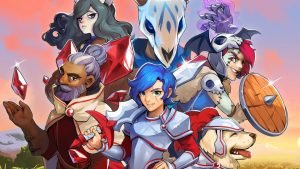 The moment players see that adorable orange fish giggle; they know they are in for quite a treat. Chucklefish games have become one of the standout studios of the indie scene after building an impressive catalogue of games in Stardew Valley, Risk of Rain, and Starbound. These are games that players continue to lose themselves in for hours with ease, and their latest title, Wargroove, is no exception. Inspired by the turn-based strategic gameplay of Advance Wars and Fire Emblem, Wargroove breathes new life into this sub-genre of strategy games by handing players the tools to create their own scenarios and campaigns and share them with others online.

Wargroove tells the story of the recently crowned Queen of Cherrystone, Mercia, who is forced to flee her beloved nation, along with her army, after coming under attack from the vile forces of Felheim. In order to gain the strength to fight back against Felheim’s legions of undead warriors and sorcerers, Mercia must ally herself with the world’s remaining factions, which includes the forest dwelling Florans, and the desert kingdom of Heavensong, to form a powerful resistance. 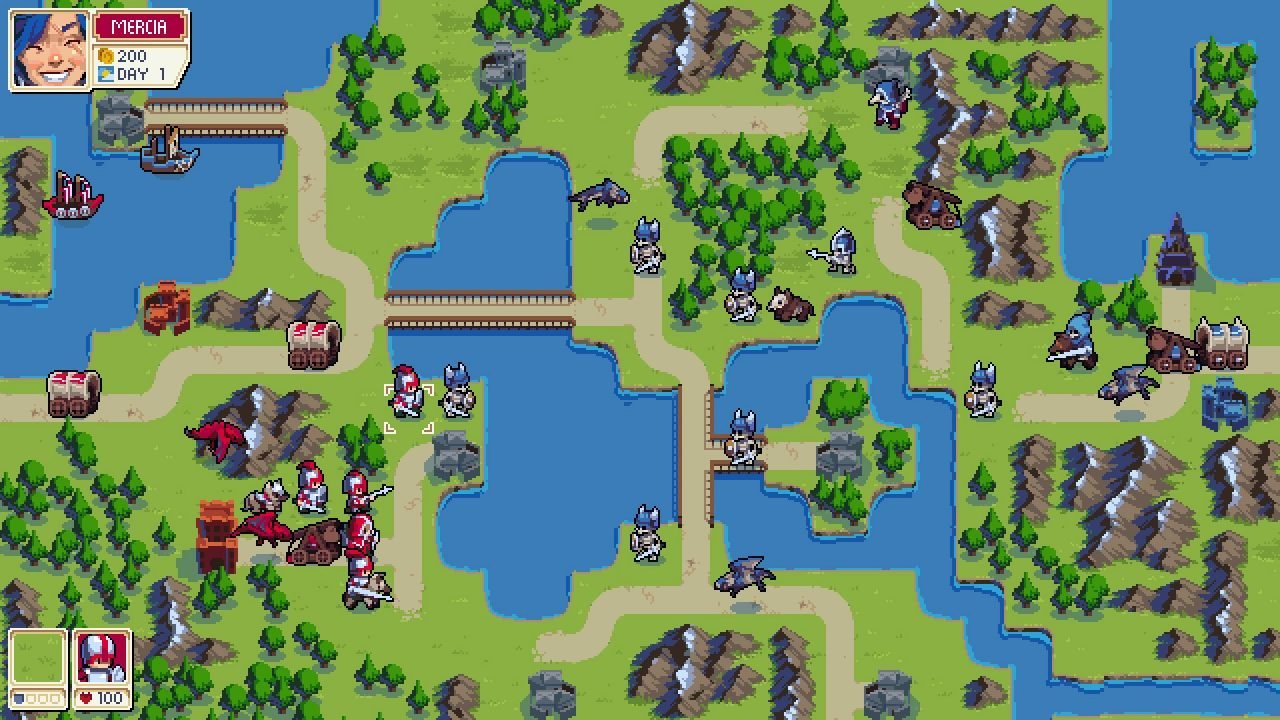 While the campaign’s overarching story is rather simplistic, I still thoroughly enjoyed Mercia’s journey because of all the fun scenarios I was thrown into as a player. At one point during the campaign, my army was surrounded by a constant fog of war, and the only way to figure out if I was about to be ambushed by the enemy was to send out my units of battlepups to occupy the surrounding mountain ranges to illuminate the path ahead. Then during another part, I had to rescue captured villagers from a band of outlaws occupying a castle with only a handful of units, and no way to heal them if they were injured. Wargroove is full of these challenging battles and constantly puts the player at a disadvantaged state, trusting they will find the solution to victory with their own strategic wits through trial and error.

In order to build an effective strategy in Wargroove, players must familiarize themselves with the game’s 12 charming commanders, and their exclusive “groove” abilities. Similar to Advance Wars’ commanding officers, each commander in Wargroove possesses an ability that can turn the tide in battle. Mercia can heal all of her surrounding troops, the Floran assassin Sedge can attack multiple times a turn as long as he continues to kill enemies, and Heavensong’s queen Tenri can even manipulate the position of units using gales of wind. I love the tactical diversity of these abilities, but I would have loved some more diversity in the actual units themselves as well. 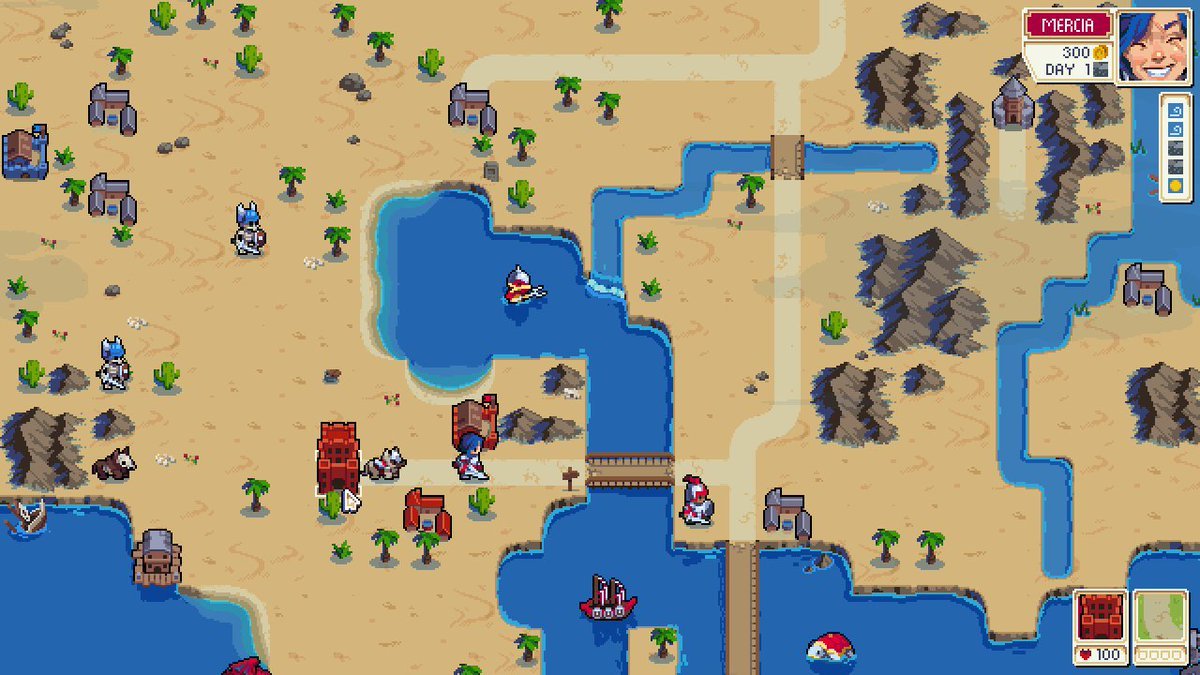 Fundamentally, each of the four warring factions in Wargroove possesses the same pool of 20 units to recruit, which range from ground infantry to air combatants, and naval units. While this does promote balanced gameplay for the multiplayer component, I feel that by not including at least some exclusive units to each race that they lose some of their own personal identity during a battle. This is a shame because Chucklefish has put in a huge amount of work in the codex section of the game to flesh out the lore of Wargroove and provide every commander and unit with its own entry to make them all feel truly unique.

Despite the lack of exclusive units, the way these 20 units’ interplay with one another is fantastic. Each unit has a list of what it is effective against, and weak against, which affects a significant amount of the gameplay as players analyze what their opponents have fielded and how to counter-attack accordingly. However, Wargroove also changes the formula up with the critical hit mechanic. By fulfilling a certain condition with a unit each turn they will be able to deal double the damage on their next attack. For a basic swordsman to critical hit, they have to be right beside their Commander, while knights have to move a full six steps during their movement phase in order to trigger theirs. This made spacing my units out a huge priority to succeed in combat because I was always aiming to trigger critical hits and create more advantage for my army. 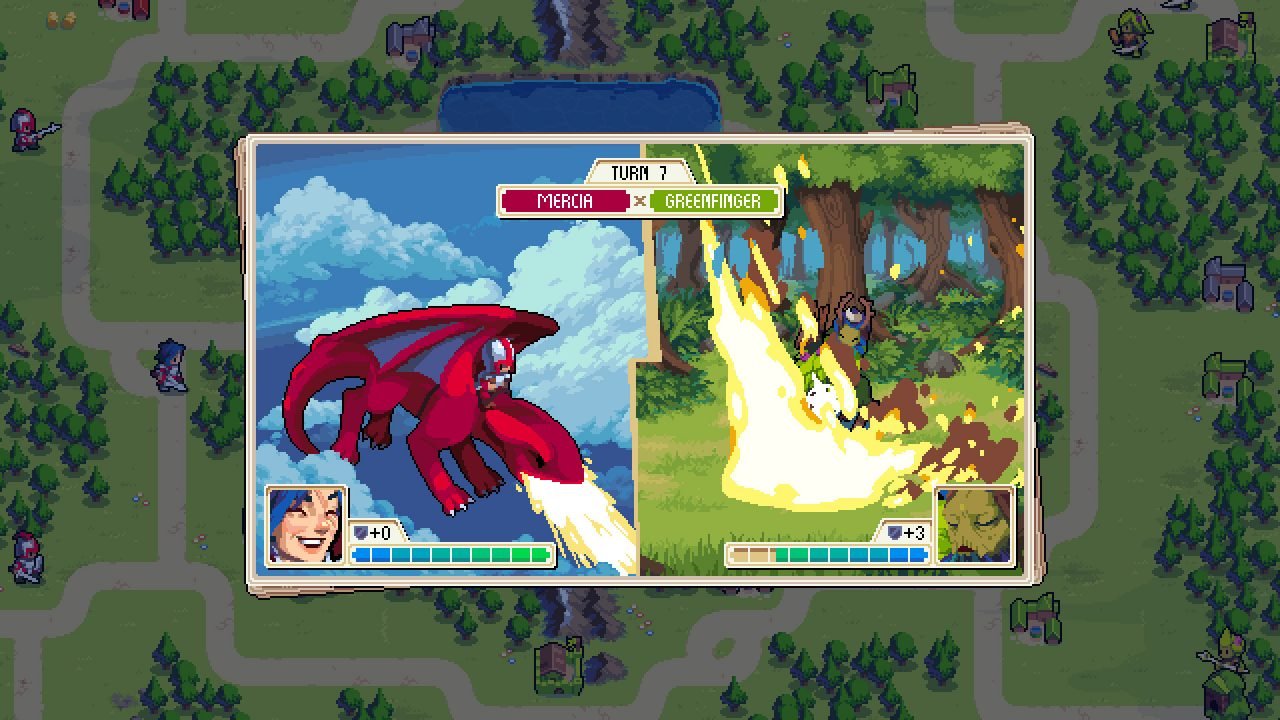 Once players are finished with the campaign of Wargroove the fun doesn’t stop there. Over the course of the story mode, players will be unlocking characters to use in arcade mode, as well as unlocking puzzle mode, which possesses even more intensive challenges for players to beat. However, the part that hasn’t been explored in depth yet is that Wargroove allows players to build their own maps, battles, and campaigns in its own custom creator. While I’ve never been great at developing my own scenarios I love the ease of use of their creator and how simple it is to create great looking maps using their detailed tile set. Wargroove also provides players with the ability to share their creations online for other players to enjoy. I can already imagine players creating campaigns surrounding their favourite races or characters, and exploring the lore more through user-created gameplay. If that wasn’t enough, players can even battle each other online, or locally, with up to four people no matter which of the available platforms they purchase the game on.

Wargroove is a deeply engaging strategy game that has the potential to continue to thrive and develop for years to come with a dedicated player base of creators. While I’ve already enjoyed much of the rich single-player content Chucklefish Games has developed for the base experience, I’m very excited to see what new campaigns and scenarios I’m going to be able to play when I revisit the game after launch.