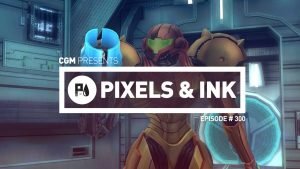 The Pixels & Ink crew reunite after a brief hiatus with a brand new format……and we’re already talking about Nintendo.

After announcing that Metroid Prime 4‘s development has officially restarted under the control of Retro Studios, Cole, Alex, and Jordan go into deep discussion about how this announcement affects the eagerly awaited sequel, and if there’s anything positive to draw from it.

Jordan brings to light Nintendo’s transparency, Cole uncovers games that have undergone a similar development cycle, and Alex brings new perspectives to the table as a growing fan of the Metroid franchise. Lastly, the crew break down what they’d love to see from the next entry in the Metroid Prime saga.