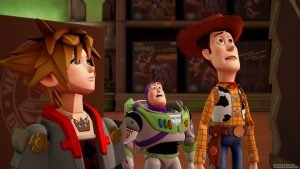 To critique a game like Kingdom Hearts 3 is to walk an impossible tightrope. Seventeen years of winding narrative threads borne out of unthinkable connections between Square Enix and Disney superstars have all led to this: the conclusive chapter in one of the most popular video game series of the modern era. Kingdom Hearts III is a game so buoyed by sky-high expectations that it would be nothing short of miraculous for it to garner universal acclaim.

Bayern Munich Sign Ex-Nigeria U17 Sta…
Hampton Cannabis Expo Founder Gary Bi…
LYRICS: Pdot O – Holy Ghost Cry
How to Help Your Husband Get On Board…
An Act of God?

Evaluating Kingdom Hearts III as ultimately “good” or “bad” is a task that demands intimate familiarity with an unbelievably dense storyline spanning numerous sequels, prequels, and side stories across a wealth of platforms—all necessary to fully appreciate the narrative payoff that bookends the so-called “Dark Seeker Saga” that began with Kingdom Hearts in 2002. As someone who has played every game in the series, I continue to insist that the Kingdom Hearts story is genuinely intelligible, if overblown and a tad inaccessible. At its core, the series is an extended musing on the power of interpersonal connection and the duality of human nature. It falls to Kingdom Hearts 3, then, to wrap up the myriad loose ends left by its predecessors over the past seventeen years by returning to those core themes and delivering one final message to its players.

Having only sunk some twenty-odd hours into my own playthrough, I can’t yet determine whether Kingdom Hearts 3 accomplishes that unenviable task. What I can say is that it is, without a doubt, the biggest, boldest, flashiest entry in the saga—one that builds upon the gameplay systems of its forebears in a kaleidoscopic carnival of action RPG jubilance. 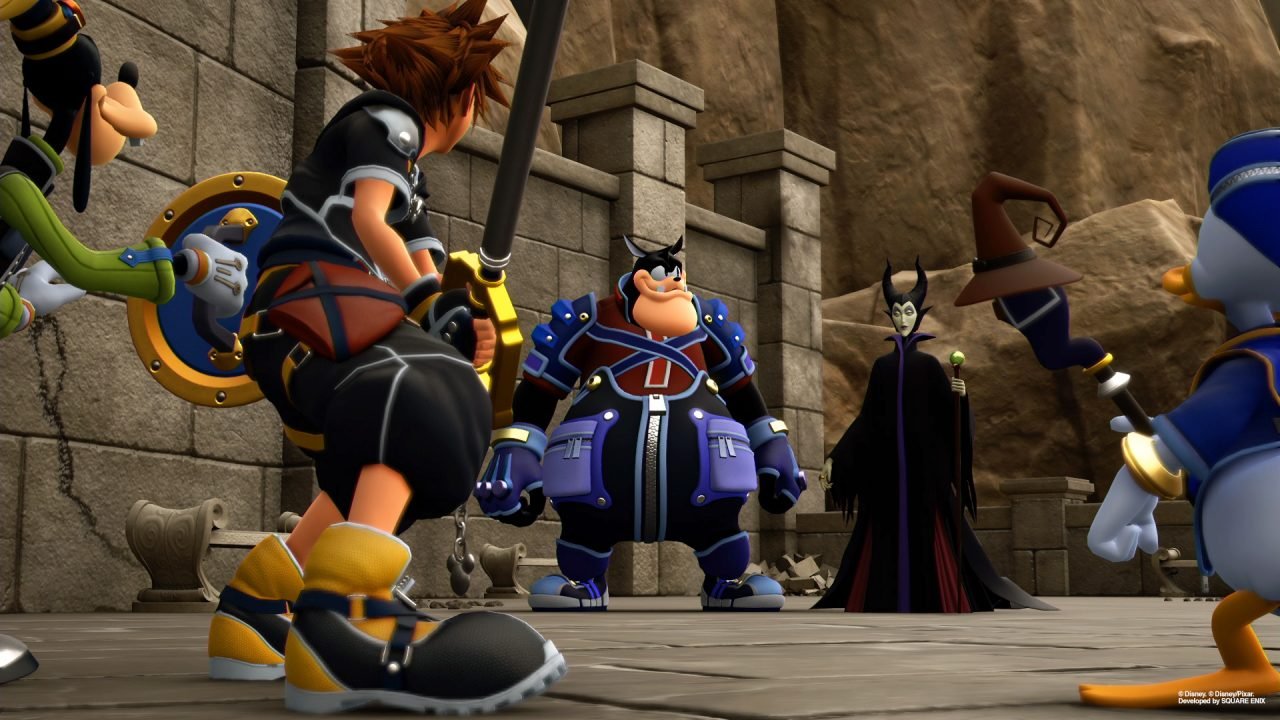 The worlds traversed by protagonist Sora in Kingdom Hearts III largely represent a newer wave of Disney hallmarks, from Toy Story to Tangled and the ever-popular Frozen. Each is rendered with the utmost reverence to the source material—sometimes so faithfully that I question the essentiality of, say, using game assets to reduplicate musical numbers I’ve heard performed ad nauseam in every corner of pop culture over the last few years. (Yes, I’m taking a shot at Frozen. No, I will not let it go.) What impresses me most about Kingdom Hearts III‘s implementation of Disney properties is the way it organically weaves its core themes into each world’s subplot. The world of Monsters Inc. leverages the movie’s core conceit—the idea of using children’s screams as a power source—as a way to explore the manifestation of the Unversed, foes created from negative emotions. The Tangled and Frozen worlds both concern themselves with the nefarious Organization XIII’s attempt to groom new candidates on the side of light (Rapunzel, Anna, and Elsa) in an attempt to ignite another Keyblade War. The Disney and Square Enix halves of Kingdom Hearts have historically not always been in perfect harmony, but Kingdom Hearts III has done an admirable job in meshing them together in the worlds I’ve experienced thus far.

Early footage of Kingdom Hearts III (and my hands-on time with Kingdom Hearts II.8 – A Fragmentary Passage) had me worried that the game’s interpretations of those Disney worlds might feel disproportionately small and lifeless, as has been the case in some previous entries. Luckily, the complete opposite is true. Never before have Kingdom Hearts worlds been so lively. The game’s bustling towns are full of NPCs, environments are varied and feature fantastic verticality, and most every area is visually distinctive. The Frozen world once again lags behind in this regard, featuring too many bland snowscapes and indistinguishable cliffside paths. But on the other end of the spectrum, the Pirates of the Caribbean world is positively enormous, with an entire overworld to explore by naval vessel, ship-to-ship combat, and underwater exploration (with manageable controls!). The Caribbean alone is the size of a smaller game’s virtual real estate. Bigger isn’t necessarily better, of course, but it’s so well-executed that I can’t turn my nose up at it. 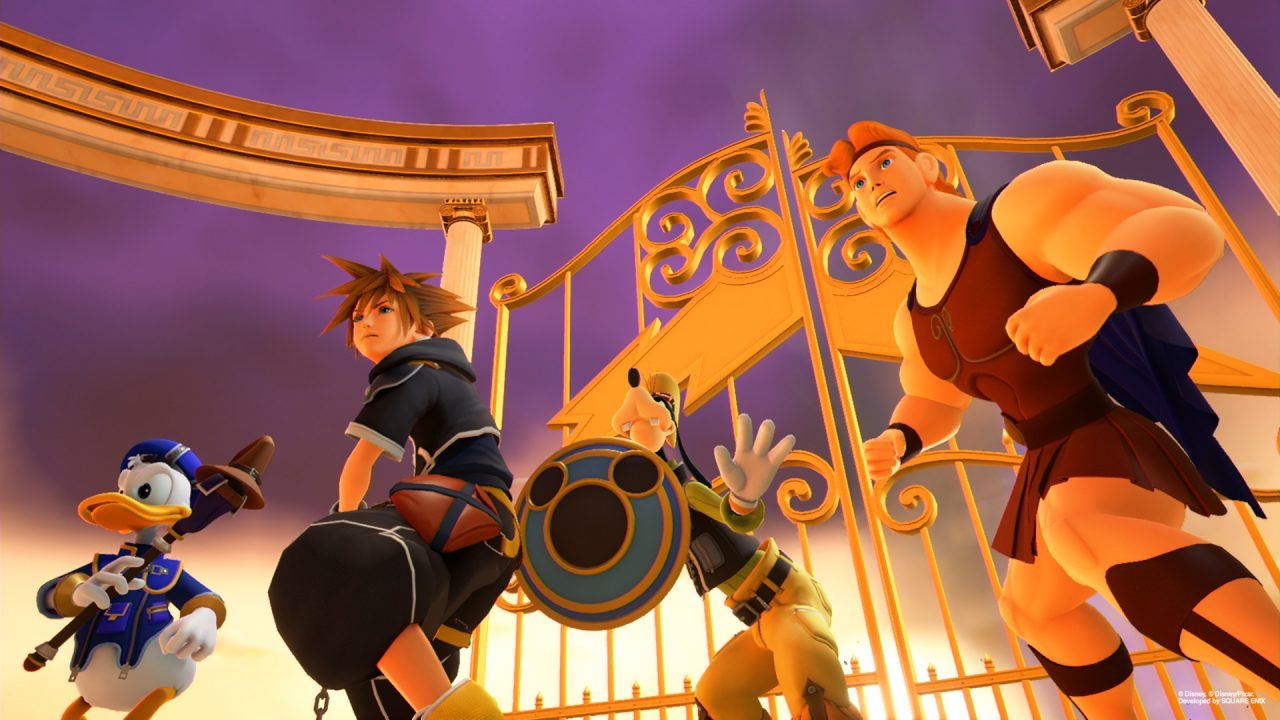 For better or worse, the gravity-defying action of Kingdom Hearts’ combat systemhas become increasingly over-the-top as the years have gone by. Keyblade combos and magic spells gave way to style-shifting Drive Forms, which gave way to adaptable Command Decks, which gave way to impossibly zippy Flowmotion movement abilities… Players don’t glide through combat in Kingdom Hearts so much as they ricochet off of every available surface like an electrified-pinball-meets-Cuisinart-blender.

Kingdom Hearts III ups the ante once again with transforming Keyblades that drastically change Sora’s attack output in exciting ways. Bladed yo-yos, icy claws, and bee-launching honey pistols are only a few of the new additions to Sora’s repertoire, and when combined with his arsenal of magic spells, character-summoning Link abilities, and cooperative team attacks, they make every encounter an opportunity to innovate in the field of dispatching Heartless (or Nobodies, or Unversed…every former foe seems to have made it back for curtain call). Also new to Kingdom Hearts III are Attractions, weaponized versions of popular rides from real-world Disney theme parks. Each is a feast for the senses and deadly besides; I beamed with genuine delight the first time I made the neon-studded Pirate Ship swing to and fro, catching Heartless in its wake, and grinned ear-to-ear watching Sora, Donald, and Goofy share a laugh while careening around a forest on a destructive Splash Run. 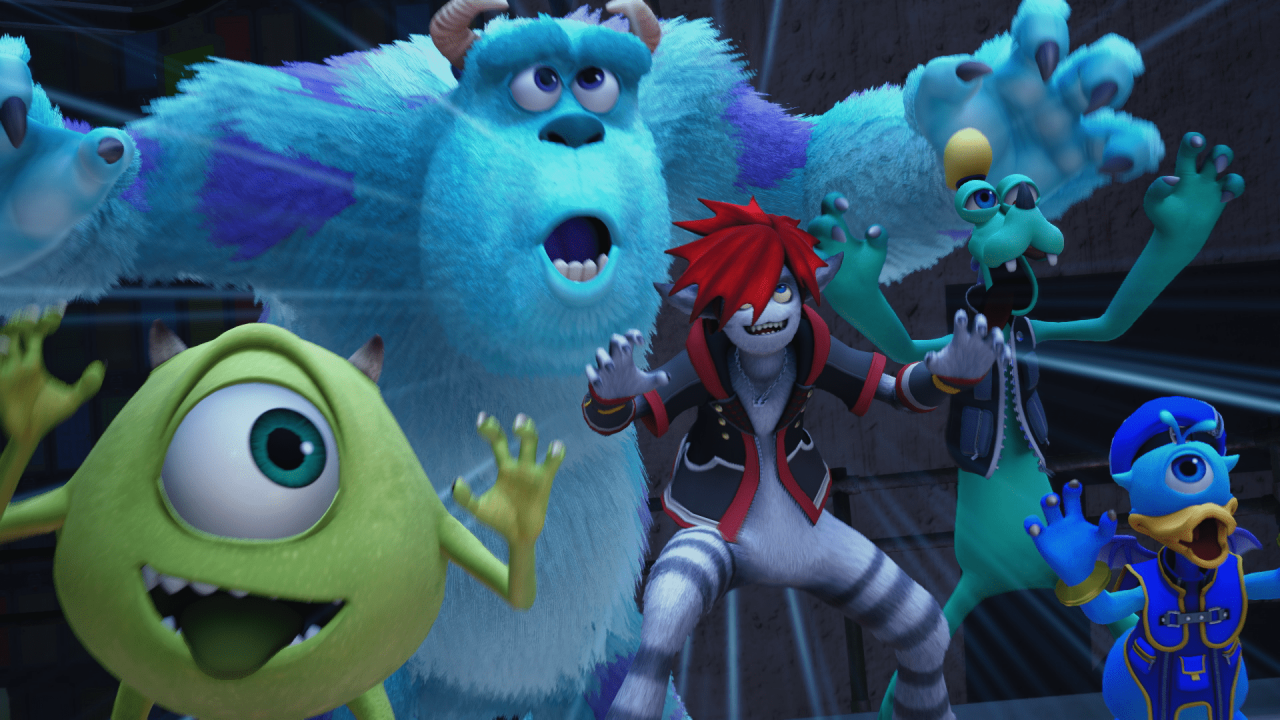 Throughout the spectacle of Kingdom Hearts III, the keyword that returns to my mind again and again is “joy.” Regardless of how it fares as the conclusion to a story seventeen years in the making, it is a playable expression of joyfulness. Laughs, smiles, light, and sound coalesce in a celebration of Disney and Square Enix that really, truly strives to meet the expectations of longtime fans both eager and embittered.

If, at any point during Kingdom Hearts III‘s jaw-droppingly gorgeous introductory cinematic, you found yourself struggling to piece together the layers of symbolism present in every frame, you aren’t alone. But if your connection with the series has endured long enough to lead you to this point—reading this article, reflecting on your experiences, wondering where Sora’s meandering path will deliver him at the end of it all—then you owe it to yourself to see Kingdom Hearts III through. I’ll return with my own final thoughts once I’ve closed that door.