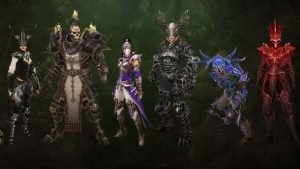 Diablo III has, for the longest while, been a game that has forced Blizzard to shift its focus to maintaining most of its community. With its Season 16 update, Diablo Iii has received a boastful of new updates that ensure new challenges and replay-ability for the foreseeable future.

Season 16 is themed around the Grandeur, and as such, it welcomes players to the plentiful of upcoming challenges by rewarding all with the power of the Ring of Royal Grandeur, an accessory that according to Blizzard’s website features “legendary power”.

After 16 seasons, Blizzard found itself in due time to provide players with a theme that rewarded them for experimentation, as the developer’s post states: “This is the season to strut your stuff, to experiment to your heart’s content”.

With that in mind, Blizzard has ensured to build a boast of new cosmetic sets into the experience, all obtaining by progressing through the Season Journey. The cosmetic sets range from the helm and shoulder slots of the exclusive Conqueror set to new series of portrait frames all themed around this season’s grandiose call for adventure.

But cosmetic updates and a stat-boosting ring aren’t the only updates Blizzard is bringing to the table, the Overwatch making company is also implementing a slew of quality of life improvements in order to make the Diablo III experience more enjoyable. More specifically, this update removes Legendary potions from player inventories so that they no longer take up space, while also making Primal Legendaries more accessible by making them display coloured beans on the mini-map.

Blizzard has also included new challenges, class balances, and new sets in the form of Haedrig’s gift, making season 16 one of the most exciting updates in the Diablo III community for a while. Season 16 is now live and will last until March 17.

Diablo III is a dungeon-crawler hack and slash that originally released on May 15th, 2012 and now finds a home across a plethora of platforms including: Windows, Mac OS, PlayStation 3, Xbox 360, PlayStation 4, Xbox One, and its latest member, the Nintendo Switch.