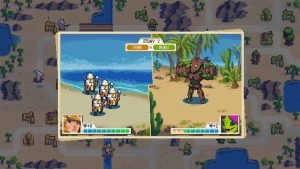 If you’ve been looking forward to new indie games on the Switch, Nintendo has got you covered.

Nintendo has revealed Multiple Indie Games set for release in 2019 in a new indie highlights video released today. The news includes a new game in the SteamWorld series, a port of Crosscode, and the surprise release of Goat Simulator.

The biggest announcement, however, was arguably the release date for , and it’s coming out a lot sooner than you’d think. Wargroove will release on the Nintendo Switch on February 1st, The turn-based tactics game was originally announced in February 2017, and takes inspiration from the likes of the Advance Wars series in its gameplay.

Next up was Double Kick Heroes, a side-scrolling, bullet hell rhythm game where you play as a metal band running from a horde of undead while rocking out. There are over thirty tracks in the game, including some licensed songs, and it will come to the Nintendo Switch first this summer.

When Ski Lifts Go Wrong was the next indie game announced, which is available for purchase right now. It’s a physics based platformer, where you must construct ski lifts and other devices to make sure passengers and skiers can reach the end safely.

From Humble Bundle comes Forager, a dungeon crawler that emphasizes gathering resources, which is ‘Coming Soon’.

One of the bigger surprises in the video was the reveal that Coffee Stain’s Goat Simulator: The GOATY is out now for the Switch. The collection features Goat Simulator along with its expansions GoatZ, and Waste of Space.

Chucklefish also announced Inmost, a moody side-scroller that focuses on story as you play as three different characters exploring a dark interconnected world. Inmost is currently set for release sometime later this year.

Unruly Heroes was yet another title that was surprisingly released today. The action-adventure game features four characters traversing a diverse fantasy world and battling monsters. In addition to the Switch, Unruly Heroes is also available for PC, Xbox One, and PlayStation 4.

In what will be great news for fans of RPG’s, Crosscode is set to launch on the Switch later this year. It’s already out for PC, and the 16-bit action RPG has been well received by many.

Lastly, the SteamWorld series is going turn-based with SteamWorld Quest: Hand of Gilgamech. The game primarily revolves around using cards in battle, and it’ll be coming to the Switch first later this year.