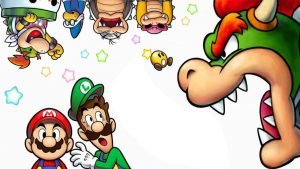 In my review of Mario and Luigi Superstar Saga + Bowser’s Minions, I ended by saying the game had “left me wanting to play Dream Team again (or wishing they had remade Bowser’s Inside Story instead).” Well it appears someone at Nintendo was listening because a little over a year later—and skipping right past Partners in Time—we’ve received a revamped re-release of Bowser’s Inside Story, so that I can once again experience the best game, now on a modern console.

For those who never experienced Bowser’s Inside Story on the original DS, the story begins when the Mushroom Kingdom is plagued with the mysterious illness known as “the Blorbs,” causing many of its residents to balloon to comical proportions. During a conference held by Princess Peach to figure out how to cure the Blorbs, the King of the Koopas crashes the party, enraged that a fellow ruler wasn’t invited to the talks.

After being defeated by Mario and thrown from the castle, Bowser ingests a mysterious mushroom given to him by the villian Fawful, that causes him to inhale everything around him, including our heroes. From there, Bowser must set on his own journey to find a solution to his problems, while the Mario Bros work within his body to assist him—unbenounced to him, of course.

Of all the Mario and Luigi RPG titles, Bowser’s Inside Story is easily the best since the majority of the game is spent playing as Bowser himself. Like previous entries, Bowser and the Bros traverse a 3D overworld, using their various Bros and Bowser moves to solve the various puzzles. However, while the main Bowser portion takes place on the overworld, the Bros can move throughout Bowser’s body in 2-D style puzzle platforming sections.

Both Bowser and the Bros participate in turn-based battles, and the trademark “Timed Hits”—which had been featured in the original—add a lot of added depth to the otherwise simplistic combat. Moreover, more complex fights actually use a combination of Bowser and the Bros, as Bowser can inhale certain tricky enemies for the Bros to fight within his body.

Bowser’s Inside Story is easily the best written and comedic entry in the franchise, due primarily to the fact that Bowser is the main protagonist. Bowser has always been written incredibly funny in these Mario RPGs, and following him for a whole game while he self-aggrandizes and plows through every problem with brainless muscle is an absolute riot.

Much like it’s re-released predecessor, Bowser’s Inside Story isn’t simply just an HD coat of paint on the original. The entire game has been beautifully recreated and several cutscenes and even giant kaiju battles—first introduced in Bowser’s Inside Story—have been redone in full 3D, resembling their appearance in Dream Team. Strangely absent from the game is the inclusion of the stereoscopic 3D, further putting paid to the idea that the 3DS is a dying console.

Of course, we must mention the Bowser Jr’s Journey side game included with the main course. Much like its re-release predecessor, this is another meaningless waste of time that offers no challenge and no real reward. This time, the story follows Bowser Jr as he leads a small battalion of Koopalings, and even the Koopa Kids, as he travels to help his dad and figure out a cure for the blorbs that are afflicting the Koopa Kingdom. While the writing and, story-plotting does offer a degree of humor, what little strategy (our illusion thereof) there is to be had in this mode is hardly worth the time spent. Again, you’re just watching characters crash into each other until someone wins.

Bowser’s Inside Story is a great game in almost every regard, however, giving it a good score feels somewhat dejected because it’s existed as a good game for a full decade. Maybe it’s just me but it kind of exists as a reminder of the incredible library the DS had, in a time where Nintendo made interesting decisions; like a Mario game where Bowser is the star.

Not only that, but it also serves as a reminder of the utter lack of real 3DS support. Much like the re-release of Luigi’s Mansion, this is little more than life-support for a dying 3DS and it rings somewhat hollow especially when the original Bowser’s Inside Story still holds up very well.  Nintendo needs to inject some real life into the 3DS or just pull the plug already and let the Switch reign supreme.

Like I said, Bowser’s Inside Story is the same great game it was and always has been. If you missed it on the DS, it’s definitely worth a purchase, but if you’ve already experienced it, the money is probably better spent on the Switch.

This post first appeared on CGMagazine, please read the originial post: here
People also like
Blackjack: What’s in a Name?
Best Things to Do in Cadaques, Beautiful Town in Costa Brava
Pyramyth Slot Review & Playtest (Thunderkick)
Top Back-To-School Preparation Tips & Activities
The Sign of Four
Physician Curriculum Vitae Tips: Selling Career Accomplishments
Facebook Launches Bitcoin Rival ‘Diem’ – Here’s Why It Isn’t a Threat to Bitcoin
Why I Chose to Be Vaccinated Against COVID-19
Smart Tips on How to Get More Likes on Your Instagram Posts