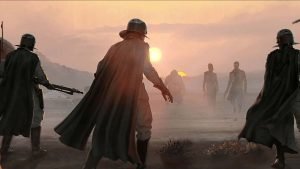 Investing in the gaming world is a tricky business, from ensuring that said company constantly releases the “next big thing” to the responsibility of investing in a gamer-friendly model, it is important to strike a balance between money-making and consumer satisfaction. According to a report by Kotaku, after failing to meet deadlines, EA has decided to cancel its untitled open-world Star Wars title.

In the report, the Kotaku source details that prior Jade Raymonds decided to move on from her career at EA, Visceral games was shut down, resulting in Raymond’s Vancouver based Motive studio to gain a new plethora of resources. Due to the sudden change, some projects such as this Star Wars title – which originally belonged to Visceral Games – suddenly gained new development teams, shifting direction in the process.

Originally, “project Ragtag” as it was codenamed, was a linear adventure game set in the Star Wars universe and designed by Uncharted director Amy Hennig – but this was soon to change. “When EA Vancouver took over, it rebooted this Star Wars project entirely, keeping some of the art assets but transforming into an open-world game.” Kotaku points out, indicating how a large project such as this Star Wars game suddenly backtracked due to the change in administration.

Since the administrative change, which happened roughly around the beginning of 2018, nothing much has been or shown about this presumed Star Wars open-world other than pure speculation, so it doesn’t come as a surprise that as of today, January 16th, the project has officially been deemed cancelled.

But it isn’t over for EA Vancouver’s dreamed Star Wars title, because it turns out, it just may be releasing a lot earlier – but with a few cut-backs. According to a Kotaku, “When EA’s top decision-makers looked at their road map for the next few years, they deduced that they needed something earlier than planned. So they cancelled Orca (the project’s codename) for a smaller-scale Star Wars project that’s now aimed for much sooner – likely, late 2020, which also happens to be around the time that I’ve heard next-gen consoles will launch”

This brings the so called Orca project to a very unfortunate ending, as it comes to show yet another time that despite a project’s ambition, EA – mainly their plethora of shareholders – have a voice that at times goes beyond a gamer’s needs.