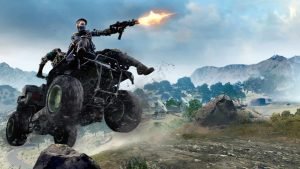 The free trial will be available on Xbox One, PlayStation 4 and PC from January 17 through January 24, according to a tweet from the official Call of Duty Twitter page.

Bring your friends — the Blackout Free Trial is coming.

Play #BlackOps4’s Blackout Battle Royale for free from January 17th to the 24th on PlayStation 4, Xbox One and PC. pic.twitter.com/jfOw2diCV9

This promotion follows multiple aggressive attempts by Activision to get more people to buy into the new all-multiplayer Call of Duty. Though Black Ops 4 launched at the full retail price ($59.99 US) just last November as a collection of various multiplayer modes—including Blackout, standard multiplayer deathmatches, and the Zombies mode—Activision would later offer PC players a discounted bundle with Blackout and the traditional multiplayer mode for just $29.99. When the promotion ended on January 6, the Zombie-less bundle remained available for $39.99.

As a company in general, Activision and its studios have had a turbulent outlook this past quarter. After years of reported discord between the publisher and Destiny 2 developer Bungie, the two companies last week released a joint statement announcing a premature end to their partnership, which will result in Bungie taking full control of the Destiny franchise. Last month, reports surfaced of Activision’s plans to roll back spending within the Blizzard Entertainment studios, which expect a light software lineup in 2019. Activision is scheduled to release its 2018 fourth-quarter financial results next month.

Call of Duty: Black Ops 4 is the first game in the franchise to feature a battle royale mode. In our review, we called Blackout “extremely fun and highly addictive despite not changing any single element established by its competitors, Fortnite and PlayerUnknown’s Battlegrounds.”