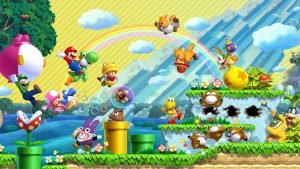 NEW Super Mario Bros. U Deluxe is not only one of the longest wordiest titles I’ve ever seen, but also an enhanced port of a Wii U launch title. Now with NEW Super Lugui U DLC included and a new playable character in Toadette, who even gets an exclusive power-up that turns her into Peachette (or cosplay of Princess Peach). If you haven’t already played the game, you’re in for a treat, however, if you have you may want to save your money. 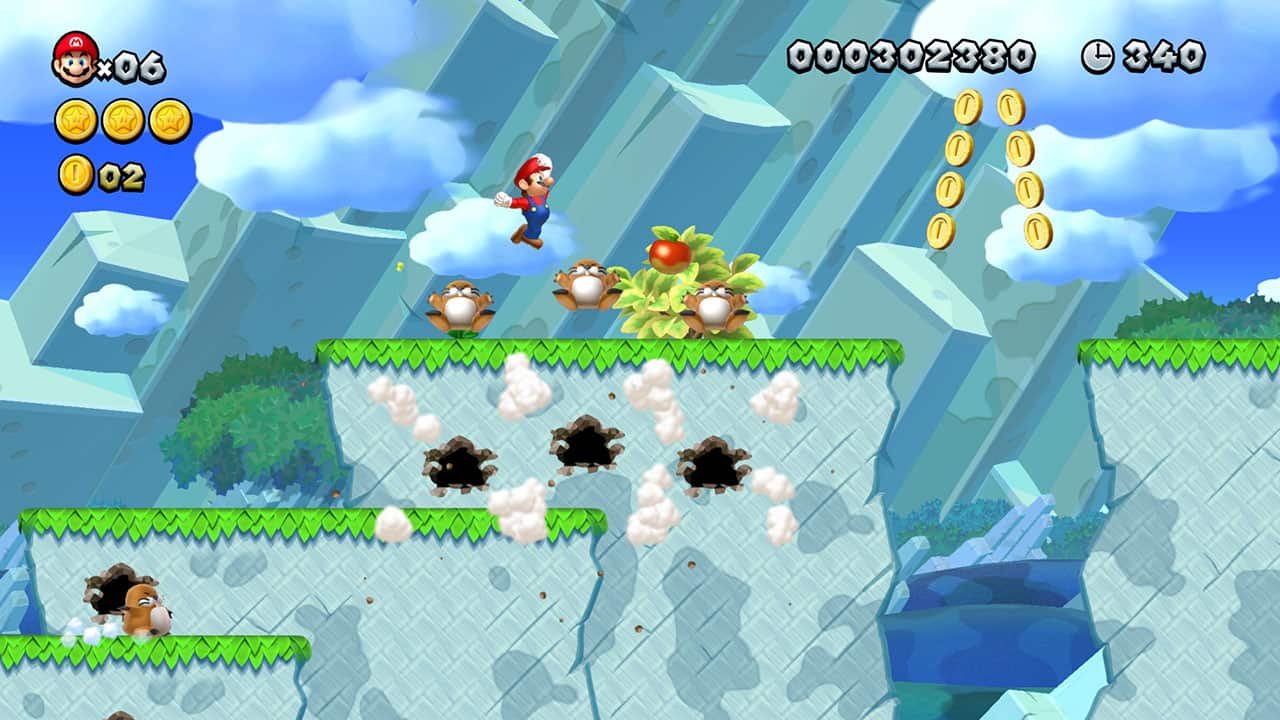 I’ve never been the biggest fan of the NEW Super Mario Bros. series, as I always found them a bit lifeless in comparison to other 2D games in the Mario series, especially in comparison to Super Mario World and its sequel. For me, those games had real character and added lots of creative enemies and memorable bosses. Sadly, the same can’t be said for the NEW series, this game included.

If you loved Super Mario Bros. 3 or the secret and ridiculous exits of Super Mario Land, then you’ll in luck, because this game heavily pays homage to them. Every world has a mini-castle that features a fight with Boom Boom (you know, the one from Super Mario Bros. 3) and a boss battle aboard an airship with one of the Koopalings (you know, those characters I win with within Super Smash Bros. Ultimate). Every stage comes to a satisfying end with what equates to jump puzzles to solve to get to the top of the flagpole earning a 1-up; though lives aren’t all that valuable here as you’ll almost certainly be maxed out at 99 for most of the game as you practically trip over extra lives.

That isn’t to say the game is easy, as it isn’t. At all. I found myself dying in most stages at least once, often when obsessing over collectible coins which are quite difficult to snag, let alone find. Thankfully there are checkpoints in most levels that allow you to start near the midway point. However, when you die you’re kicked back to the overworld map where you can use items you’ve obtained from Toad’s House or from chests. Frustratinly, this process can take up around 5 seconds to load, and when you are dying a lot, that adds up. 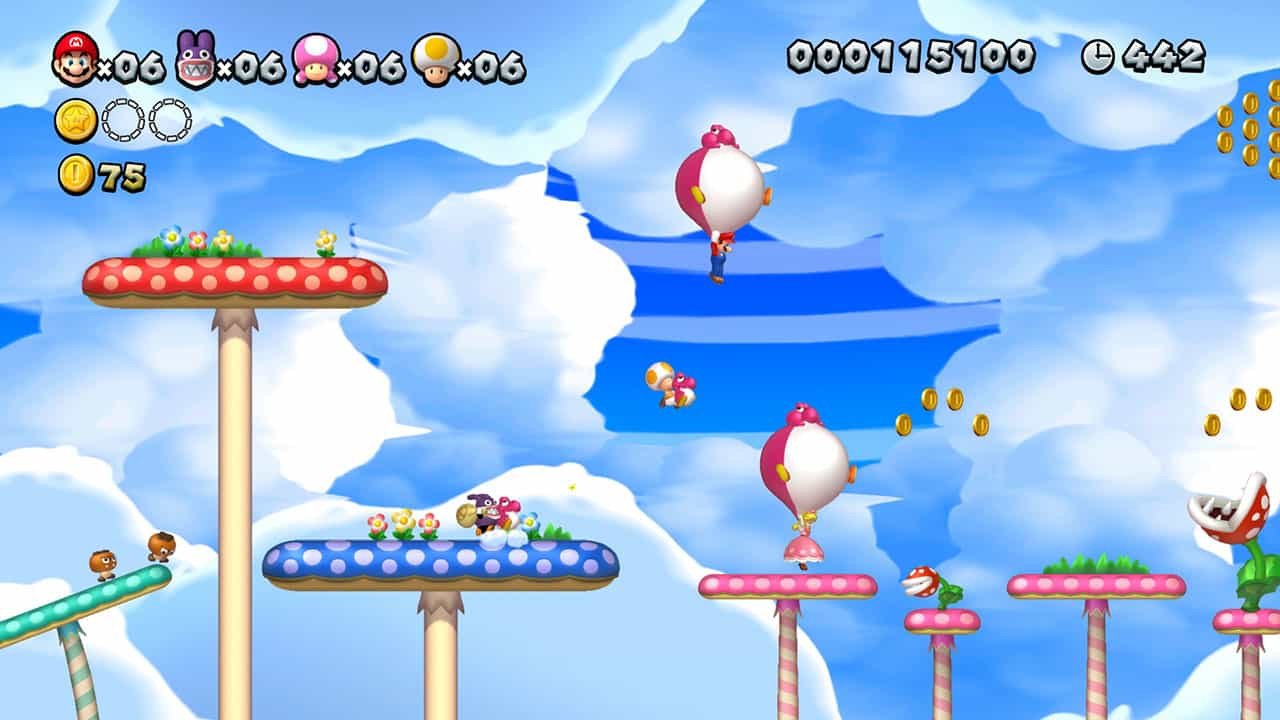 If you find the game too hard, you can play as either the new addition of Toadette with her Peachette power, higher jump, and ability to float, or Nabbit, the thief character from the game who is invisible to enemies. The game deems these as “easy” and “easiest.” As I’ve played the game before, I played through as Toadette since her and her power are the only real new addition to this version of the game. Even though she was listed as the easy character, I still found the game quite challenging, although more enjoyable since its a smidgen more forgiving.

There has been some controversy with regards to difficulty when playing with four players, as at least one player must be Toadette or Nabbit. I don’t understand why this decision was when in the original you could play with Mario, Luigi, and two Toads at the same time. A secret hidden in the game makes this change even more infuriating and perplexing, of which I won’t spoil here, but you could probably guess what it is.

There has been some controversy with regards to difficulty when playing with four players, as people have assumed at least one player would have to play as Toadette or Nabit, but I can tell you that isn’t the case. I don’t know why Nintendo is keeping this a big secret when it clearly has upset some people, but from the start, there is a process to ensure you are not be forced into an “easy” character.

Unlike it’s Wii U counterpart, Deluxe runs smoothly with no framerate issues, making this the ideal system to play it on, if you have the choice. The graphics are still crisp and colourful, although mostly forgettable aside from a handful of stages that take a chance artistically. The same repetitive songs are still here, unfortunately. You know the song you hear during the first level? Hope you love it because you’re gonna hear it what will feel like a million times with little to no variation on your playthrough. I’m big on game music, and this is easily the worst music in the series.

I personally found the game most enjoyable in handheld mode, mainly because levels are bite size and made for nice little breaks from the rest of my life. That said, if you want to play with four players you’ll probably want to play in docked mode unless you have some very tiny and well-sighted friends. 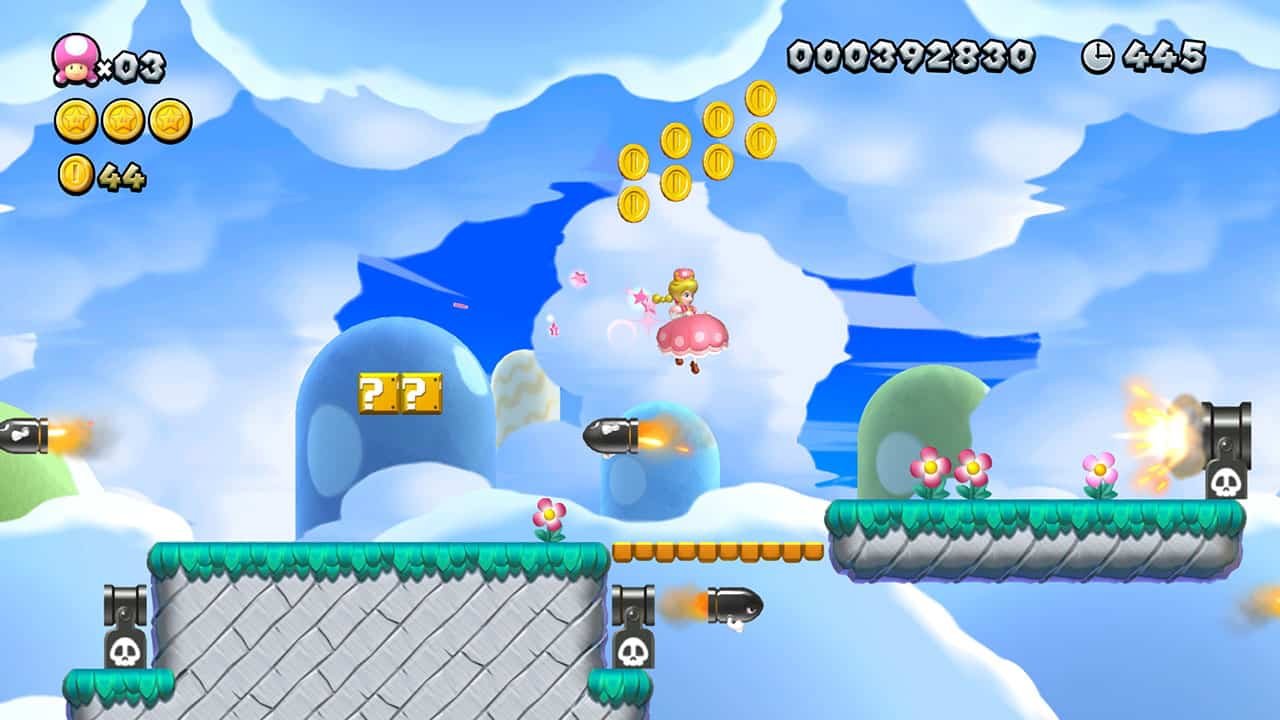 Multiplayer is as fun as you make it. If you and your group of friends who like messing around in games, killing each other and goofing off then you’ll probably have a good time. More progress oriented players will be frustrated by their friends getting in the way and/or throwing them off the screen. I don’t find that the Mario games have lent themselves well to multiplayer in general, and this game isn’t an exception to that rule.

If you’ve played the game on the Wii U to completion, then I’d recommend passing on this one as there is little new here outside of a stable framerate, Toadette, and the highly overrated HD rumble. But if you skipped the Wii U and loved Super Mario Bros. 3, then this is a must play. It’s challenging (there’s even a challenge mode for the True Gamers(tm)), it controls great, and it pays homage while still managing to expand on the series gameplay with a few clever new gimmicks, like baby Yoshi abilities. Plus you get the NEW Super Luigi U expansion included, which is basically harder reworked versions of stages from the main game. A pretty great value.

This post first appeared on CGMagazine, please read the originial post: here
People also like
Cyberpunk 2077 Gets 43 GB Update, But It’s Not the Day One Patch
Top 10 Facial Mists & Sprays For Dry and/or Sensitive Skin