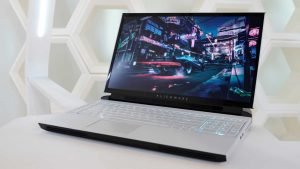 CES 2019 is already off to a blistering start and Alienware’s announcements are a significant reason why.

Right off the bat, the company announced their new “Legend” line led by the Area-51m, a powerhouse laptop built with the purpose of replacing desktop gaming setups. The Area-51m is a 17″ Alienware laptop that is simply a powerhouse. It sports 9th Gen 8-core desktop processors, 64GB2 of memory, 2.5Gbps Ethernet technology, along with upgradeable graphics. The Area-51m also has cutting-edge thermal and cooling technology that bring 50 per cent more performance and 32 per cent less volume than its predecessor. There is no word yet on when the device will release, but you can sign up for updates right here.

On the smaller side, Alienware introduced the m17, which is their thinnest and lightest 17-inch notebook ever to date. That being said, it still packs quite a punch and it comes complete with optional NVIDIA GeForce RTX

There were also a few esports related tidbits as Team Liquid announced that they are building a second Alienware Training facility for their players. This new facility will be located in the Netherlands and will provide European players closer home base then the Alienware facility in Los Angeles. Alienware is also teaming up with Riot Games and League of Legends Esports in partnerships that will involve both organizations using Alienware’s peripherals. Alienware VP Frank Azor stressed how excited the company is about their new products and partnerships.

“We’re excited to come to this year’s CES with some truly groundbreaking products, next-gen software and strategic partnerships that will bring more people to experience PC gaming and advance the industry. The legend design answers the call for more and better from our gaming community, and the new G Series laptops will make PC gaming even more accessible to those looking for high-performance gaming at a cost they can appreciate.”

CES takes place at the Las Vegas Convention Centre in Nevada and runs from today untill January 11th. Stay tuned to CGMagazine for all the big announcements and moments from the conference as they unfold.