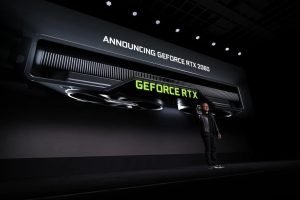 LAS VEGAS, Jan. 06, 2019 (GLOBE NEWSWIRE) — CES — NVIDIA today announced that the world’s top manufacturers are bringing to market a record number of laptops based on its revolutionary Turing GPU architecture — including the fastest, thinnest and lightest systems ever created.

More than 40 new laptop models in 100-plus configurations will be available later this month. They will be powered by NVIDIA® GeForce® RTX GPUs, which fuse the performance of next-generation shaders with real-time ray tracing and AI to blur the line between movies and gaming with cinematic-quality rendering.

“Laptops are the fastest growing gaming platform — and just getting started,” said Jensen Huang, founder and CEO of NVIDIA, who introduced the lineup at the start of the annual CES tradeshow. “The world’s top OEMs are using Turing to bring next-generation console performance to thin, sleek laptops that gamers can take anywhere. Hundreds of millions of people worldwide — an entire generation — are growing up gaming. I can’t wait for them to experience this new wave of laptops.”

Turing-based laptops will be available across the Geforce Rtx family — from RTX 2080 through RTX 2060 GPUs.

Running quieter and cooler, many use NVIDIA Optimus® technology to deliver up to 2x more battery life.

Max-Q design and NVIDIA RTX technology deliver the next generation of thin, high-performance laptops to gamers. With up to 2x the performance of a PlayStation 4 Pro, the laptops can play the latest ray-traced games like Battlefield V at 60 frames per second.

Laptops with the latest GeForce RTX GPUs also are equipped with:

Content Creation, on the Go
In addition to providing outstanding gaming performance, GeForce RTX laptops are powerful mobile platforms for the millions of video editors, 3D animators, game broadcasters and other content creators who demand the best performance to do their work faster and better.

Hardware-accelerated ray tracing takes rendering from minutes to seconds, enabling animators to work interactively with their models — with accurate lighting, reflections and shadows. NVIDIA RTX video processing capabilities enable video editors to work with up to 6K RAW video in real time, and let broadcasters create high-quality streams to Twitch — all while on the go.

Pricing, configurations and availability will vary among regions and partners.

About NVIDIA
NVIDIA’s (NASDAQ: NVDA) invention of the GPU in 1999 sparked the growth of the PC gaming market, redefined modern computer graphics and revolutionized parallel computing. More recently, GPU deep learning ignited modern AI — the next era of computing — with the GPU acting as the brain of computers, robots and self-driving cars that can perceive and understand the world. More information at http://nvidianews.nvidia.com/.

Certain statements in this press release including, but not limited to, statements as to: the performance, abilities, benefits and availability of Nvidia Geforce Rtx and Turing GPUs and GeForce RTX-powered laptops;  NVIDIA GeForce RTX being used and coming to market in a record number of laptops from all major OEMs, including the fastest, thinnest and lightest systems ever created; the availability of 40 new laptop models with 100-plus configurations and the models being powered by NVIDIA GeForce RTX GPUs; NVIDIA GeForce RTX GPUs fusing the performance of next-generation shaders with real-time ray tracing and AI and it blurring the line between movies and gaming with rendering;  laptops being the fastest growing gaming platform and just getting started; the world’s top OEMs using Turing to bring next-generation console performance to laptops; hundreds of millions of people worldwide, an entire generation, growing up on gaming; the performance, abilities and benefits of Max-Q, including its approach to gaming laptops, design, and ability to run quieter and cooler; NVIDIA Optimus technology being used to deliver improved battery life; the benefits, performance and abilities of both Max-Q design and NVIDIA RTX technology, including delivering the next generation of performance to laptop gamers, performance versus PlayStation 4 Pro, and rate of frames it can play games; the features of GeForce RTX GPUs, including WhisperMode, enabling plugged-in laptops to run quieter while optimizing power efficiency, NVIDIA Battery Boost enabling longer battery life, and NVIDIA G-SYNC enabling faster refresh rates and tear-free gameplay; GeForce RTX laptops serving as mobile platforms for millions of video editors, 3D animators, game broadcasters and other content creators; hardware-accelerated ray tracing shortening rendering time and enabling animators to work interactively with their models; NVIDIA RTX video enabling video editors to work in real time and stream on the go; the availability and ability to receive a bundle of Battlefield V and/or Anthem with the purchase of a GeForce laptop; and the variability in pricing, configurations and availability of GeForce RTX-powered laptops are forward-looking statements that are subject to risks and uncertainties that could cause results to be materially different than expectations. Important factors that could cause actual results to differ materially include: global economic conditions; our reliance on third parties to manufacture, assemble, package and test our products; the impact of technological development and competition; development of new products and technologies or enhancements to our existing product and technologies; market acceptance of our products or our partners’ products; design, manufacturing or software defects; changes in consumer preferences or demands; changes in industry standards and interfaces; unexpected loss of performance of our products or technologies when integrated into systems; as well as other factors detailed from time to time in the most recent reports NVIDIA files with the Securities and Exchange Commission, or SEC, including, but not limited to, its annual report on Form 10-K and quarterly reports on Form 10-Q. Copies of reports filed with the SEC are posted on the company’s website and are available from NVIDIA without charge. These forward-looking statements are not guarantees of future performance and speak only as of the date hereof, and, except as required by law, NVIDIA disclaims any obligation to update these forward-looking statements to reflect future events or circumstances.

© 2019 NVIDIA Corporation. All rights reserved. NVIDIA, the NVIDIA logo, GeForce, G-SYNC, NVIDIA Battery Boost, NVIDIA Turing and Optimus are trademarks and/or registered trademarks of NVIDIA Corporation in the U.S. and other countries. Other company and product names may be trademarks of the respective companies with which they are associated. Features, pricing, availability and specifications are subject to change without notice.

A photo accompanying this announcement is available at http://www.globenewswire.com/NewsRoom/AttachmentNg/97488bdc-f3e6-4ad2-b608-bf75fee1a450